The global liquor confectionery market size to be valued at USD 784.4 million by 2025 and is expected to grow at a compound annual growth rate (CAGR) of 5.1% during the forecast period. Increasing demand for liquor confectionery as a result of changing palate of the consumers, millennials in particular. European countries such as the U.K., Germany, and Belgium have a high consumption level of liquor. Chocolates infused with alcohol introduced in these countries drive the consumers to experiment and try out new ways of alcohol consumption. This scenario has been boosting the demand for the global market. 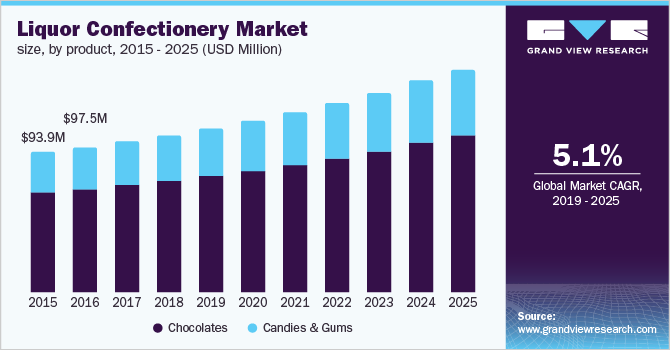 Increased penetration of handmade confectioneries using liquor as a main ingredient is a major factor contributing to the growth of the global market. Changing form of alcohol consumption leads people to spend more on liquor confectionery, thereby driving the global market. In addition, new product developments, along with availability of different flavors, are anticipated to boost the market growth in upcoming years. For instance, Abtey company launched their new products made up of refined alcohol and ganache centers with four new variants of coulis namely ganache and rum jelly, ganache and strawberry jelly, mousse and kirsch jelly, and ganache and Cointreau jelly.

Countries such as the U.K., Germany, Switzerland, and Belgium have a high demand for liquor. Moreover, these are the key manufacturers of the most premium chocolates such as Swiss and Belgium chocolates in the global market. This, in turn, increases the scope of such liquor confectioneries in these countries. Moreover, presence of premium chocolate manufacturers in the European countries result into continuous product innovations.

For instance, Victoria Chefina sells its popular variants under Belgian chocolate, which is a mixture of rum, apple whisky, bourbon whiskey, and jalapeno whiskey, tequila with salt, champagne with raspberries, and cabernet wine. Neuhaus is considered to be the premium brand for liquor confectionery in Belgium that offers chocolates made up of liquid liquor fillings of Glenfiddich Whisky, Cointreau, Pampero Rum, Smirnoff Vodka, and Remy Martin Cognac.

The factors driving market growth include the increasing preference &accessibility of homemade liquor confectionery to consumers. The marketing strategy is crucial to address the growth in demand, as most users fall under the premium category. Moreover, the gifting culture is likely to be evident in developed markets.

The fluctuating prices of raw materials used in the manufacturing process are likely to limit the market expansion. As these products fall in the premium category, their high prices act as a challenge to the market's global expansion.

The growing trend in chocolate consumption functions as an ancillary, and it is responsible for expanding the alcoholic confectionery sector, creating more opportunities for industry participants. There is also a rising tendency for alternate forms of alcohol use, which is expected to further boost the demand for confectionery items. Global market leaders are likely to benefit from the segment's opportunity for exploration.

In 2018, chocolates led the global market with a revenue of USD 382.4 million. Smart labeling and different manufacturing procedures of these chocolates confectioneries drive the attention of the consumer. Anthon Berg produces fine dark chocolates with orange liquor and cocktails with high quality cocoa in the shape of miniature bottles.

Candies and gums are expected to expand at a CAGR of 4.6% over the forecast period. Major vendors are coming up with innovative candies and gums offerings with special features, which is expected to drive the segment in the coming years. For instance, instead of sugar getting dissolved in prior, chocolate is layered over hard candies filled with alcohol beverages.

Supermarkets/hypermarkets was the dominating distribution channel with a revenue of USD 282.6 million in 2018. Such stores provide ample opportunity to select amongst a variety of flavored confectioneries.  This scenario is attributed to easy access, visibility of the various products, along with various discounts and offers. Supermarkets and hypermarkets provide discounts and other attractive offers such as “buy get 1 free” to drive in more consumers, thereby soaring up the sales of liquor chocolates. 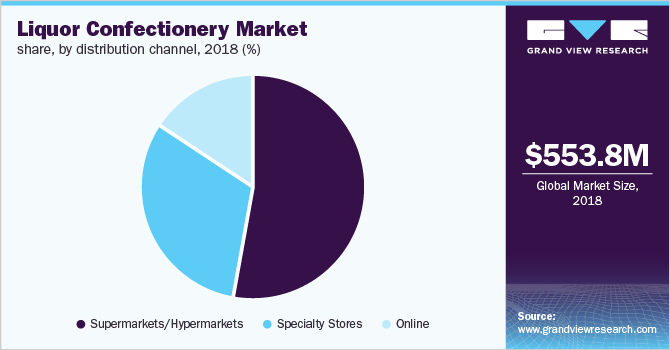 The online channel is expected to expand at a CAGR of 5.7% from 2019 to 2025. Candy warehouse, Alibaba, and Amazon are popular in selling liquor confectioneries, along with company’s own websites. Some companies focus more on online selling for the same instead of making it available over stores or supermarkets for the convenience of consumers to access the variety according to the taste and preference. Solidarno Liqueurs & Vodka prefers to sell liquor confectionery online. They are made in limited quantities and are distributed mostly in the country of origin.

In 2018, Europe held the largest share of 49.3% owing to increase in demand for liquor confectionery in countries such as Switzerland, Germany, and Belgium. Increasing penetration of these products for their tastes, availability in various flavors, and tradition of consuming them on various occasions are the key factors driving the market in the region. European cultural customs for these chocolates and candies has this tradition to enjoy these handmade liquor confectioneries on big occasions, vacations, and celebrations. 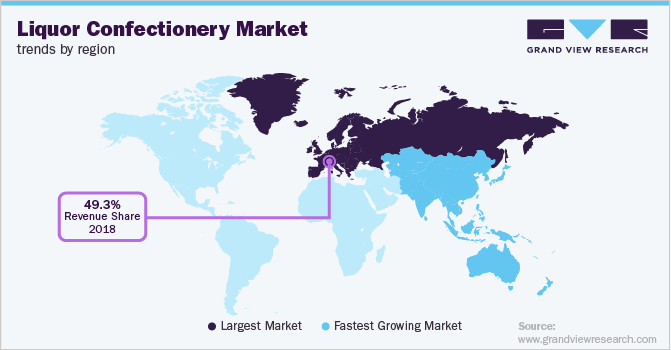 Asia Pacific has emerged as the fastest growing industry and is expected to register a CAGR of 5.9% over the forecast period. The growth is attributed to increase in awareness and change in preferences for the intake of alcohol beverage in confectionery. Consumers majorly millennial are ready to spend money to taste new confectioneries as these products are compatible with occasions instead of heavy intake of alcohol.

Few major companies are taking up strategies such as mergers and acquisitions to enhance their capability and product offerings. For instance, Ferrero purchased the U.S. business of Nestle for the manufacturing of liquor confectioneries for USD 2.8 million. In addition to this, Barry Callebaut acquired American Almond Products Co. to expand its product line further.

This report forecasts revenue growth at the global, regional, and country levels and provides an analysis of the latest industry trends in each of the sub-segments from 2015 to 2025. For the purpose of this study, Grand View Research has segmented the global liquor confectionery market report on the basis of product, distribution channel, and region. 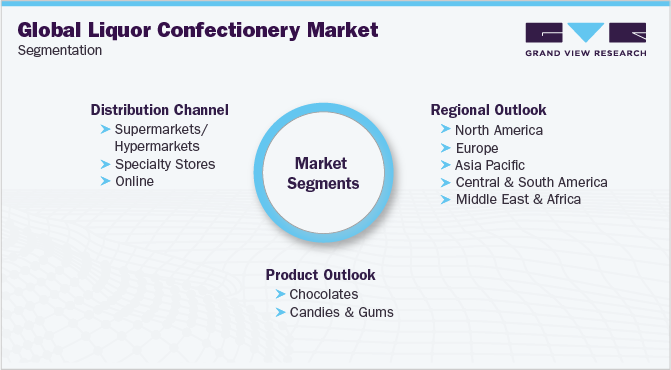 How big is the liquor confectionery market?

What is the liquor confectionery market growth?

Which segment accounted for the largest liquor confectionery market share?

b. Europe dominated the liquor confectionery market with a share of 49.1% in 2019. This is attributed to Increasing penetration of these products for their tastes, availability in various flavors, and tradition of consuming them on various occasions in countries such as Switzerland, Germany, and Belgium.

Who are the key players in liquor confectionery market?

What are the factors driving the liquor confectionery market?

b. Key factors that are driving the market growth include changing preferences of millennial consumers, increased penetration of handmade confectioneries using liquor as a main ingredient, and new product launches by key manufacturers worldwide.