The global live cell imaging market size was valued at USD 4.3 billion in 2016 and is projected to grow with a CAGR of 8.5% over the forecast period. The rapidly rising prevalence of chronic diseases demands higher and quicker diagnostic facilities, which is the key driver of this market. It also accelerates drug discovery & research, which is crucial in both developed and developing countries.

Increasing funding for the development of efficient live cell imaging techniques is also anticipated to boost the market over the forecast period. Funding institutes such as Health Connexions (2015), National Institute of Health (2012), and W.M. Keck Foundation (2015) have granted funds to institutes such as Harvard School of Medicine, Perdue University, and Weldon School of Biomedical Engineering for the development of imaging technologies to be applied in the field of health, food, and environment

Industry players are increasingly collaborating with research institutes and universities to provide them with their products and co-develop new applications of the same. In 2014, an agreement was signed between the Northeastern University of Boston and Phase Holographic Imaging, wherein the company was to provide HoloMonitor technology to the university to establish novel applications and techniques in cell analysis.

There are increasing acquisitions of smaller players by the key leaders to strengthen their position in the industry and gain access to their technologies. For instance, in July 2013, Carl Zeiss acquired the U.S.-based Xradia. The acquisition was aimed to further strengthen the position of Carl Zeiss Group in the fields of life science and material applications. Xradia, operating as Carl Zeiss X-ray Microscopy, Inc. will manufacture 3D X-ray microscopes for industrial and academic research.

Extensive research being conducted to develop microscopes of higher resolution is likely to boost the market over the forecast period. New technologies such as inverted research-grade microscopes have enabled imaging of adherent cells and organelles and yield results for tissue sections of less than 5 um thickness. New developments are also allowing imaging of the cells in spatial resolutions within a time range.

Consumables play an important role in optimizing the yielded results. The optimal dye, probes, and medium are crucial for time-lapse imaging wherein the cells are exposed for a long duration. The potency of cells may negatively be affected by the wrong choice of medium. Many industry players such as Thermo Fisher and Enzium Inc are active in the market.

The overall industry trend is shifting toward automation, integration of systems, and maximizing the data generation from the microscopes. The increasing use of live cell imaging amongst cell biologists to understand the fundamental nature of the cell function and structure has resulted in this shift.

The market is segmented by application as cell biology, developmental biology, stem cell & drug discovery, and others. Cell biology dominated the application segment due to the rising number of researchers working on molecular interaction networks. Innovations such as filter techniques and advanced illumination devices further enable the procedure. Cell biologists utilize live cell imaging to understand the fundamental cellular structures and their interaction on the tissue level. Advantages such as clarity of structural components and spatial heterogeneity of a cell offered by live cell imaging are anticipated to further boost the market.

Developmental biology also followed closely cell biology in terms of application due to the use of live cell imaging in observation of cell embryogenesis and to study the physiological state of the cell. It allows researchers to view the cell activity and proliferation throughout the developmental procedure. The other applications of the imaging technique include fields such as drug genetics, neurobiology, immunology, and microbiology. Advancements in these fields are also expected to contribute to growth in the coming years.

On the basis of technology, the market is categorized as time-lapse microscopy, Fluorescence Recovery After Photobleaching (FRAP), Fluorescence Resonance Energy Transfer (FRET), High Content Screening (HCS), and others. FRET dominated the technology segment in 2015 due to the advantage offered by it in determining the spatial proximity at the protein level, which cannot be achieved by fluorescence microscopy. This technology has gained popularity in recent years due to its rising application in genetic targeting peptides.

The segment is also strengthened by newly launched products by industry players. For instance, in November 2016, Merck launched a new microfluidic system, CellASIC ONIX2, intended to be used for live cell imaging. The product is perceived to offer better cell manipulation techniques and stable imaging conditions. Moreover, in 2015, Enzo Life Sciences, Inc. launched quencher dyes that are utilized in FRET imaging. Similarly, a new photostable dye was developed by researchers at Nagoya University in October 2015. This dye was intended to use in STED live cell imaging. 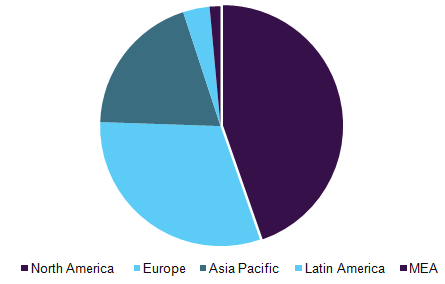 North America dominated by market share in 2016 closely followed by Europe. Generous investments and funding available for research in this field is the key driver in this region. In December 2016, the Government of Canada announced funding worth USD 8 million to support the Canada Research Chairs Program. This fund was a part of total funding worth more than USD 164 million allocated for infrastructure. Projects on live cell imaging in plant development, which are undertaken by McGill University are included under this program.

Europe also held a major share due to early adoption of technology. The growing aging population demands for intensive research in chronic diseases such as cancer, neurodegeneration, and cardiac diseases. This has favored stem cell research and advanced microscopy. Institutes such as Cancer Research UK and Wellcome Trust are increasingly funding research in cell and developmental biology. In December 2016, the trust committed a fund worth USD 143 million to support 14 research centers over the period of the next 5 years.

Private research institutes and universities are working toward making the technology accessible and to yield faster results. In December 2016, Uppsala University published a study to show the use of smartphones in live cell imaging and its feasibility This will eliminate the need for expensive equipment and consumables.

The live cell imaging industry is highly competitive with major companies dominating the market. Industry titans such as Carl Zeiss, Nikon Corporation, and Becton Dickenson have undertaken strategies such as new product launches, partnerships, and expansions to strengthen their position.

One of the recent acquisitions in the industry was done in March 2017 by Sartorius who agreed to buy Essen BioScience in a transaction worth USD 320 million. Essen was active in developing equipment, reagents, and software.

Nikon Corporation has strategic partnerships with research groups to gain professional expertise. They have established imaging centers and provide microscopes, automation, software, and support to many institutes such as Harvard Medical School.

This report forecasts revenue growth and provides an analysis of the latest trends in each of the sub-segments from 2014 to 2025. For the purpose of this study, Grand View Research has segmented the live cell imaging market on the basis of product, application, technology, and region: