The global loudspeaker market size is anticipated to reach USD 8.48 billion by 2025, primarily due to the growing demand for soundbars. Increasing consumer spending on entertainment is expected to open new avenues for industry players over the next seven years. Changing consumer preferences and lifestyle are also expected to boost demand over the forecast period.

Increasing penetration of Wi-Fi enabled devices such as smartphones, laptops, and tablets is expected to spur demand for such speakers. Wi-Fi and Bluetooth-enabled products are anticipated to gain popularity over the forecast period. Technological advancements in design, power consumption, sound quality, and size are expected to offer industry players a competitive edge over the others.

The soundbar comes up with wireless supports such as Wi-Fi connectivity, Near-Field Connectivity (NFC), and Bluetooth. These devices use minimal wiring and require less space. Most of the soundbars available in the market can connect to portable devices such as smartphones, MP3 players, laptops, and tablets. The growth of smart electronics with interconnected technology is anticipated to fuel demand over the forecast period. 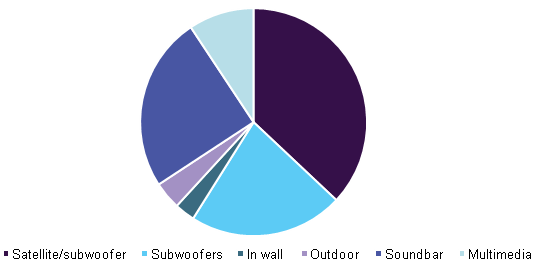 The consumers install satellites and subwoofers at homes for a better sound experience. The audio quality that these systems are capable of producing is expected to drive the satellite/subwoofer loudspeaker market.

The Europe market is estimated to be the key regional segment over the forecast period owing to increasing spending in at-home entertainment. However, slow growth in disposable income and the weak macroeconomic factors are anticipated to hinder growth over the next seven years.

The Asia Pacific market is anticipated to witness substantial growth over the forecast period owing to increasing disposable income and growing middle-class population. Growing demand in emerging nations such as India and China is expected to open new growth opportunities for industry players over the next seven years. The increasing middle-class population in India is anticipated to boost the demand for this market.

The North America market is estimated to witness significant growth owing to the increasing popularity of in-home entertainment and growing disposable income. The increasing population of avid music listeners, growing digital music sales, and immense popularity of video and audio entertainment are anticipated to impact favorably regional market over the next seven years.

Bose professional products are offered to customers through AV-system integrators, pro-audio dealers, and distributors. In October 2015, Bose announced the introduction of next-generation SoundTouch Wireless Systems enabled with Wi-Fi and Bluetooth. In June 2015, Bose announced the introduction of next-generation SoundLink Mini Bluetooth speaker II with a built-in speakerphone for receiving calls.

In April 2015, Definitive Technology along with Polk Audio announced the availability of Spotify Connect for its wireless music system enabling users to play and control music through Wi-Fi connected speakers. In May 2014, Sony announced SRS-X3 and SRS-X2 portable Bluetooth wireless speaker to provide a rich bass output power in a sleek definitive outline design.

This report forecasts revenue growth at global, regional & country levels and provides an analysis on the industry trends in each of the sub-segments from 2014 to 2025. For the purpose of this study, Grand View Research has segmented the global loudspeaker market on the basis of type and region