The global lubricants market size was valued at USD 126.5 billion in 2019 and is expected to grow at a compound annual growth rate (CAGR) of 3.6% from 2020 to 2027. The global manufacturing sector has a direct impact on the lubricants demand as they are used in numerous industries including paper and mill, metal forming, foundry, mining, quarrying, energy, plastics, food and beverages, and machining. 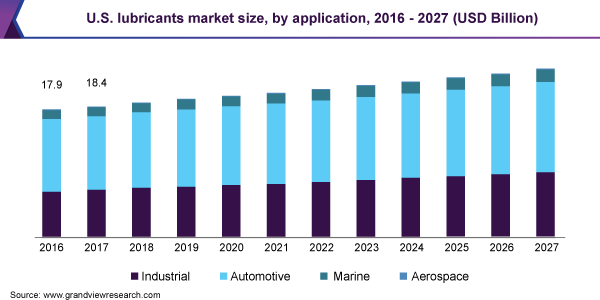 Lubricants are extracted from crude oil, which undergoes a preliminary purification process, known as sedimentation before it is pumped into fractionating towers. The crude oil is then heated in huge fractionating towers. The various vapors which can be used to make fuel, are boiled off & are collected at different points in the tower. The market dynamics have been witnessing changes, in terms of raw materials owing to the establishment of stringent environmental compliances and rising demand for bio-based products.

The market for lubricants in the U.S. was driven by the consumption of lubricants from the automotive industry which accounted for a share of 57.7%, in terms of volume, in 2019. However, on a global scale of market movement, the industry reflected an economic malaise which eventually led to an overall flat year, thereby dampening potential prospects for automobile suppliers and manufacturers. U.S. automotive production witnessed a decline and major manufacturing companies shifted their production bases to Mexico, due to easier trade policies with Asia and Europe. These factors are projected to hinder the demand for automotive lubricants in the U.S.

Furthermore, the U.S. lubricant industry has made constant progress in terms of producing advanced quality products with longer oil drain intervals. This resulted in lower consumption of oils and greases as a result of higher efficiency. Bio-based industrial lubricants in U.S. marketspace are growing due to the stringent regulatory norms regarding environmental deterioration, which in turn, is expected to act as a restraining factor for synthetic lubricants over the foreseeable future.

However, from a global perspective, the manufacturing sector has witnessed robust industrialization over the past few years on account of fragmentation of production at the international level and intensification of trade in sophisticated manufacturing goods. The industrial sector exhibited positive development after the recent recovery in BRICS economies post the 2009 recession and is anticipated to further witness significant growth. Growth drivers for the manufacturing sector in the market for lubricants include favorable foreign investment norms, availability of a large pool of skilled labor, and technological know-how.

Despite the growth of the manufacturing sector across different economies, global lubricant consumption is anticipated to be hindered by the rising inclination towards bio-based alternatives. The demand for bio-based lubricants is growing at a rapid pace. North America and Europe have emerged as the largest consumers of these products owing to the stringent environmental protection policies and also the rising awareness amongst the regional consumers.

Furthermore, the global coronavirus outbreak has caused noteworthy changes in operations of multiple industries, including oil and lubricant marketspace. In the early stages of the first quarter of 2020, it was projected that the impact shall be havoc for the market in China, however, with the outbreak of the virus spread beyond Asia, the future projects of oil demand, price, and supply looks grim worldwide. There are two subtle ways that are predicted in this scenario. Firstly, due to containment efforts taken by all governments across the Asia Pacific, North America, and Europe, the travel restrictions shall cause limited utilization of jet fuel, which will lead to slower supply chain movement in the oil industry.

Further, as several workers are sent home, industrial activities have slowed down significantly, which directly implies lower production as well as consumption of oil and oil-derived products. Secondly, the virus spread had a significant impact on the stock market which creates a second impact assumption base for the oil industry. As the health of the global economy declines, the market sentiments will directly impact the oil curve in the foreseeable future, which is projected to prompt flight from the energy as well as oil and gas sector stocks, thereby leading to further downfall of oil prices.

Crude oil is a key feedstock for the production of lubricants and the virus outbreak has led to oil price downfall for the third consecutive day in March, which reflected 17 years low of the U.S. crude industry. However, looking at the end-use markets of lubricants, the automotive sector has been a crucial part of the ecosystem worldwide. Major automakers from across the globe rely on China to outsource their automobile parts and components. With a disrupted supply chain and complete operational shutdown in China, the automotive sector took a significant hit globally. Although the key automobile manufacturers are improvising strategies to continue smooth operations, however, the duration of the coronavirus pandemic is still not traced to the end, which will directly lead to sustained discrepancies in the supply chain of the industry.

Automotive lubricants emerged as the leading application segment in 2019, with over 57.0% of the market volumetric share. Rising sales of passenger cars, buses, and trucks are expected to augment automotive oils and greases demand over the forecast period. The rise in economic conditions in emerging economies such as China, India, and Brazil has facilitated the development of superior infrastructure and enhanced public transportation systems. Additionally, consumers prefer spending on personal vehicles, which is expected to propel the demand for high-performance lubricants in various automotive applications.

The automobile oil segment is further segmented based on product type including motor oil, engine oil, gear oil, transmission fluids, brake fluids, coolants, and greases. Engine oil led the global automotive lubricants market in 2019 with a share of 55.0%. SAE has classified multi-grade engine oils based on their resistance to temperatures, wherein, for a typical passenger vehicle running at temperature grounds of 32°F, the type of oil preferred are 20W-50, 10W-30, 5W-30, 10W-40 and 5W-20, whereas, for vehicles operating at 0°F, oil grades preferred are 10W-40, 5W-30, 10W-30 and 5W-20. For temperature conditions below 0°F, 5W-30 and 5W-20 are preferred. 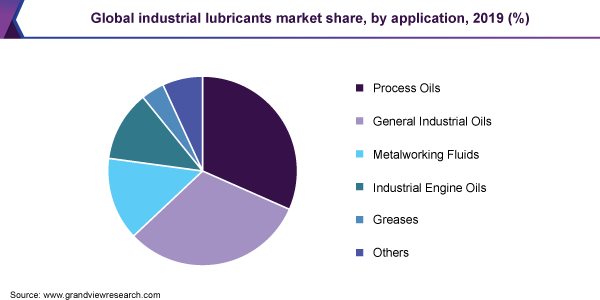 Industrial lubricants segment held a market share of 39.3% in terms of revenue in 2019. The segment is anticipated to witness a CAGR of 3.8% from 2020 to 2027. These products are widely utilized in gas engines, air compressors, hydraulics, auxiliary equipment, heat transfer systems, turbines, paper machines, natural gas compressors, metalworking, food machinery, and bearings. Increasing industrial production in emerging markets of the Asia Pacific and Latin America is anticipated to drive the demand over the forecast period. Mining, unconventional energy, and chemical industries are the major markets for industrial oils and greases, wherein they are primarily used for industrial engines, compressors, hydraulics, bearings, and centrifuges.

The Asia Pacific dominated the market and accounted for a revenue share of 42.4% in 2019. The region is expected to emerge as the fastest growing market for lubricants with a CAGR of 4.5% from 2020 to 2027. The high growth in the base oil market, coupled with rapid industrialization, burgeoning population, and urbanization, are anticipated to drive the growth of the market in the region. Moreover, high growth in major end-use industries such as textiles, chemicals, food processing, and metalworking is further anticipated to propel market growth. In addition, the presence of technical expertise also offers several lucrative opportunities to innovate and tap into niche applications with novel products having extra-ordinary characteristics.

The strong economic growth in the Asia Pacific, majorly due to the favorable government policies and increased support for urbanization is anticipated to generate lucrative opportunities for lubricant manufacturers across various end-use industries. The growth in urbanization is expected to drive the growth of the automotive industry in the region. The rapid industrial development coupled with an increasing standard of living has resulted in high demand for high-performance luxurious passenger cars. These trends have largely attracted heavy investments from international automotive manufacturers, who are shifting their production facilities to the region. Asia Pacific also offers low-cost labor, ever-increasing demand, and favorable government policies.

Europe has high growth potential for the industrial lubricants industry due to rapidly growing chemical manufacturing facilities in the region. The heavy growth is largely driven by the intervention of several multinational chemical manufacturers across countries such as Russia, the U.K., France, and Germany. These products are by large utilized for multiple applications such as the production of fertilizers, rotatory as well as compressor units in manufacturing units, and more, which helps in multiple fold increase in operating cycle as well as the performance of machinery that undergoes severe stress.

Typical product manufacturers use crude oil, CBM, tight oil, and other additives to formulate all types of lubricants. Major companies such as Shell, Total, Chevron, ExxonMobil, BP, and Sinopec have integrated their business operations globally. Companies are also adopting collaborative business strategy owing to key factors such as, to increase their productivity, to provide highly regarded products to consumers, and to expand their regional presences. Some of the prominent players in the lubricants market include:

This report forecasts revenue growth at a global, regional, and country levels and provides an analysis of the latest industry trends in each of the sub-segments from 2016 to 2027. For the purpose of this study, Grand View Research has segmented the global lubricants market report on the basis of application and region:

How big is the lubricants market?

What is the lubricants market growth?

Which segment accounted for the largest lubricants market share?

b. Asia Pacific dominated the lubricants market with a share of 44.8% in 2019. This is attributable to the rising focus on manufacturing activities and the growth of chemicals, textiles, metalworking, and food processing industries.

Who are the key players in lubricants market?

What are the factors driving the lubricants market?

b. Key factors that are driving the lubricants market growth include rapid industrialization, particularly in brics nations and growing automotive sales.

The lubricants market is highly dependent on the demand from the industrial sector and the automotive industry. The recent CoVID19 outbreak has resulted in the slowdown of the manufacturing and automotive sectors, thereby negatively affecting the demand for lubricants. The updated report will account for COVID-19 as a key market contributor.