The global lung cancer diagnostics market size was estimated at USD 1.63 billion in 2015. Technological advancements pertaining to tumor diagnosis contribute to market growth. The need for more efficient diagnostic systems is due to the fact that only 15% of the lung cancer cases get diagnosed while the remaining undiagnosed cancer cases develop into more aggressive forms, which reduces the 5-year survival rate to only 4% in these patients that are detected with late-stage lung cancer.

In the developing world, there has been a dramatic rise in the prevalence of smoking, which is expected to influence the incidence rate of lung malignancies in the coming years. The increasing prevalence of cancer is directly proportional to market growth as it propels the demand for early screening and diagnosis of cancer. 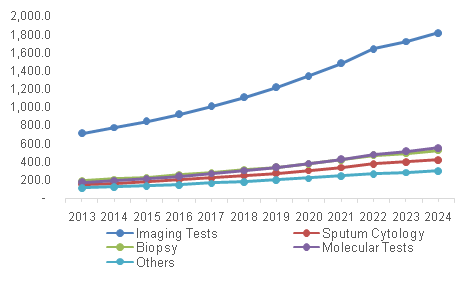 The introduction of technological advancements with regard to precision, cost-effectiveness, and accuracy; the growing awareness levels amongst the population, and the availability of private & government funds for R&D to develop better tumor diagnostic tools are some of the factors anticipated to further fuel the market growth over the forecast period.

In 2015, the imaging tests segment was identified as the largest test segment majorly due to the high usage rates of various imaging techniques including MRI, CT scan, and X-ray as the primary screening techniques used for cancer diagnosis. Imaging tests serve as the initial screening tool for the diagnosis of lung cancer and are useful throughout the treatment period.

Molecular tests pertaining to lung cancer facilitate personalized treatments. These tests are used for the identification of specific proteins, genes, and other tumor-specific factors known as mutations including EGFR, BRAF, ALK, ROS1, HER2, and RET.

North America was identified as the largest regional market with revenue of over USD 520.0million in 2015. The large revenue share is attributed to the high market penetration rates of technologically advanced products, the rising patient awareness, and the rising smoking prevalence level in the region.

In addition, the presence of a favorable reimbursement framework (especially succeeding the implementation of the Affordable Care Act) and sophisticated healthcare infrastructure are expected to boost the usage rates of diagnostics tools in North America. Initiatives, such as smoking cessation programs conducted by the American Lung Association (ALA) and campaigns to increase awareness of the symptoms of lung cancer are expected to further boost the regional market growth.

However, Asia Pacific is projected to grow at a lucrative CAGR of over 9.5% during the forecast period. Major factors responsible for the fastest growth exhibited in Asia Pacific include the rising penetration of the advanced lung cancer diagnostic tools in the region coupled with the rising awareness about the disease symptoms.

Mergers and acquisitions with an objective to cover vast distribution areas and novel product development is a key strategy that is being implemented by these market players. For instance, in August 2014, Illumina partnered with pharma majors such as Janssen Pharmaceuticals Inc., AstraZeneca plc, and Sanofi S.A. to develop gene sequencing tools for the diagnosis of lung cancer under the personalized medicine approach. Moreover, investments to ramp up research and development efforts with the aim to enhance the existent cancer diagnostic tools is expected to be a transforming decision for both, the end-users (hospitals and clinical laboratories) and the product developers.