The global lymphoma treatment market size was valued at USD 11.7 billion in 2018 and is anticipated to grow at a CAGR of 9.5% over the forecast period. The growing uptake of premium-priced products such as immune checkpoint inhibitors, Keytruda, and Opdivo is driving the market.

Also, the launch of several novel therapies and label extension of commercialized products are expected to boost the growth. For instance, in 2018, the U.S. FDA approved Adcetris for use in patients with an advanced stage of classical Hodgkin lymphoma in combination with chemotherapy. 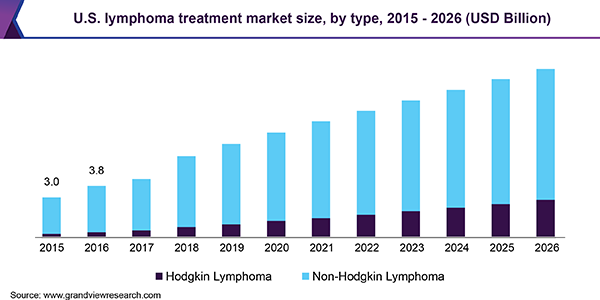 According to Leukemia & Lymphoma Society, in 2019, 82,310 new cases of lymphoma and 8,110 & 74,200 cases of Hodgkin & Non-Hodgkin Lymphoma (NHL), respectively, are expected to be diagnosed in the U.S. Moreover, it is estimated that there are 874,730 people in remission or are living with lymphoma in the U.S. The 5-year survival rate of patients with Hodgkin Lymphoma (HL) has more than doubled. The survival rate is 93.9% for patients with HL aged 45 and below at diagnosis. It has been estimated that in 2019, about 20,970 people in the U.S. are likely to die from lymphoma.

Large pharmaceutical companies operating in the oncology space are adopting strategies such as collaborations and acquisitions to further strengthen their position in the lymphoma treatments market. In 2015, cancer therapeutics witnessed a substantial number of collaborations, reflecting players growing interested in this domain. Numerous research institutes and organizations globally are collaborating to develop novel therapies for treatments of lymphoma.

For instance, in 2015, Amgen, Inc. collaborated with Merck & Co., Inc. to support a cancer immunotherapy phase 1b/3 study, investigating Keytruda in combination with Blincyto in individuals with Diffuse Large B-cell Lymphoma (DLBCL), which is the most common type of NHL. This study is a multicenter, open-label, randomized trial to evaluate efficacy and safety in patients with DLBCL.

Based on type, the market is categorized into Hodgkin and non-Hodgkin lymphomas. NHL held the largest share in 2018 owing to the presence of blockbuster drugs such as Revlimid, Rituxan, and Imbruvica, which are some of the biggest revenue-generating oncology drugs.

Hodgkin lymphoma is expected to witness the fastest growth during the forecast period due to the label extension of existing drugs and the launch of new therapies for relapsed or refractory HL. Also, the presence of a strong product pipeline along with the expected commercialization of these products is one of the factors expected to drive growth.

Based on drugs, the market for lymphoma treatments is segmented into Adcetris, Opdivo, Rituxan, Imbruvica, Keytruda, Revlimid, and others. Revlimid held the largest share in 2018 and is expected to witness significant growth during the forecast period. Revlimid sales are being driven by an increase in the duration of cancer treatments. Rituxan/MabThera held the second-largest share in 2018 owing to the increasing use of this product in multiple indications along with a high prescription rate in major markets such as the U.S. and Europe. 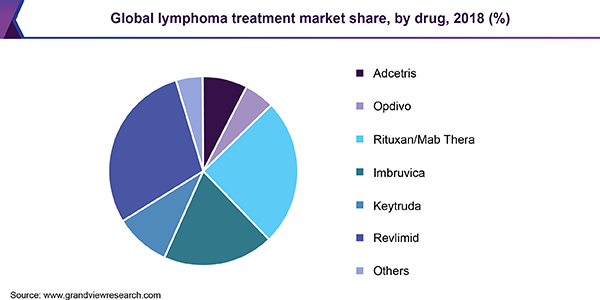 North America held the largest share in 2018 and is expected to dominate during the forecast period. This can be attributed to the presence of key players, availability of novel drugs, wee-established healthcare infrastructure, and high R&D expenditure.

Asia Pacific is expected to witness the fastest growth during the forecast period with a CAGR of nearly 11% owing to rise in healthcare expenditure, high unmet clinical needs, increase in awareness about treatment options, and availability of effective treatment in emerging countries such as China & South Korea.

Key players are adopting various strategies such as mergers & acquisitions to increase their market share. Furthermore, players are collaborating to launch their products in different regions to further strengthen their position in the market. For instance, Seattle Genetics collaborated with Takeda Pharmaceuticals to commercialize its product Adcetris in key regions other than North America.

This report forecasts revenue growth at global, regional, & country levels and provides an analysis of the latest industry trends in each of the sub-segments from 2015 to 2026. For this study, Grand View Research has segmented the global lymphoma treatment market report based on type, drug, and region: