The global marine lubricants market size was estimated at 1,841.4 kilotons in 2016. Rising demand for durable products and increasing trade activities, especially in emerging economies of Asia Pacific, are among the key trends escalating market growth. 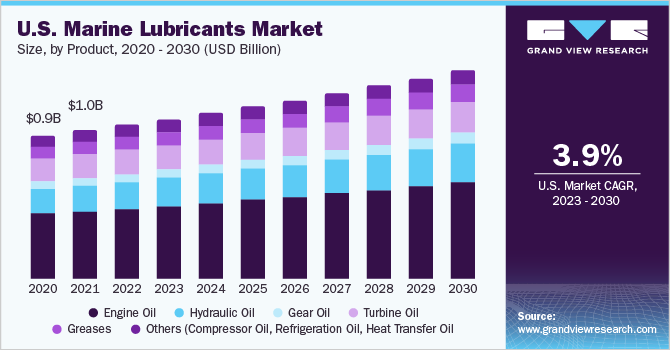 Marine lubricants are widely utilized in the shipping industry to protect and enhance the efficiency of engines and equipment. These are high-performance fuels, specially designed to enable optimal performance in operations. They possess various exceptional inherent characteristics such as extending engine life and protecting components at high temperatures, improving performance and reliability of machinery, enhancing protection from mechanical wear and mitigating cold corrosion.

Increasing oil-drain intermissions and decreasing oil consumption in the inland or coastal shipping industry in recent years is creating several demand-supply issues. Major industry players are, therefore, involved in the development of a broad range of high-quality oils for all types of marine engines, incorporating the the latest technological advancements for delivering consistently high performance.

Protecting the environment is of growing importance for every sector. With the increasing number of ships delivering cargo across the world, concerns over emissions and waste product disposal are estimated to increase as these ships are generally dependent on oil-based fuels. The International Marine Organization (IMO) is continually reviewing and updating requirements to tackle pollution due to dumping, oil, and exhausts.

Asia Pacific is anticipated to hold a prominent position in the global arena throughout the forecast horizon. Economic performance would rally in Southeast Asia, as major economies such as the Philippines and Indonesia ramp up investments in manufacturing & industrial activities, while Vietnam sustains its current expansion levels.

Volatility in crude oil prices coupled with tightening supply is likely to restrain the growth of the market over the forecast period. Overbuilding has converged with slowing economic growth and a raft of vessels today are chasing only a limited number of cargoes. This, in turn, is hindering the upward climb of the market.

However, various strategic partnership plans covering the future development of the shipping, ports, and business services sector have been cumulatively developed by industries and governments across various developed nations, including the U.K. This factor is projected to open new avenues for the growth of the market over the coming years.

The market has been segmented into engine oil, hydraulic oil, gear oil, turbine oil, greases, and others on the basis of product. Engine oil emerged as the leading segment in 2016 and accounted for over 45.0% of the overall revenue. This segment is likely to witness significant growth over the forecast period. Engine oils include system oils, cylinder oils, and trunk piston engine oils. The burgeoning population coupled with increasing consumer income levels is leading to an increase in the demand for commercial goods. This, in turn, is projected to influence the growth of the segment positively.

Hydraulic oils are expected to be the fastest-growing segment in the marine lubricants market, with a CAGR of 3.8% in terms of volume over the forecast period. It is used for extending pump’s life under severe conditions, cleanliness, and reliable air release filterability. the Latest technology, which meets environmental norms, has led to low toxicity levels for marine life.

Asia Pacific was the leading revenue contributor in the market in 2016, representing about 44.0% of the overall revenue. The presence of a large number of ports, along with a rapidly expanding shipbuilding sector, and increasing trade activities with the U.S. and other developed economies are the primary growth stimulants of the market. Major Asian ports are quickly acquiring foreign ports and are expected to penetrate the U.S. market in the offing. 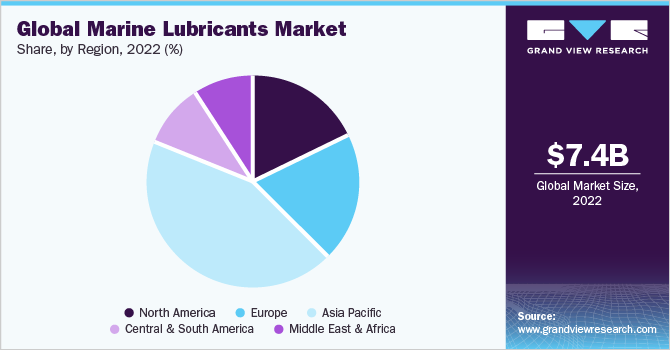 The marine industries in China, India, and Singapore are estimated to tread along a healthy growth track over the forecast period. The factor is anticipated to stir up the consumption of marine lubricants in the region. Several industries are opening their manufacturing units in Asia Pacific, owing to the availability of cheap labor and raw materials in the region. It is poised to provide a significant push to the market in Asia Pacific. Additionally, the region has been witnessing increasing investments in the manufacturing sector, primarily due to increasing trade activities in China.

The Asia Pacific shipping sector is primarily driven by Singapore’s core business of container. Singapore is focused on developing its port to become a premier global hub port and an international maritime center over the forecast period. Furthermore, to ensure that Singapore maintains its edge in terms of quality, the Maritime and Port Authority is also involved in the promotion of maritime R&D with a focus on off-shore and marine engineering, port, and shipping.

North America accounted for close to 23.0% of the total market volume in 2016. The industry is experiencing a renaissance and has a significant contribution to the national, economic, and homeland security of the U.S.

The domestic maritime transport sector is playing a pivotal role in the development of energy infrastructure. With the increasing movement of refining petroleum, crude products, and chemicals, especially after the shale oil revolution in the U.S., the shipbuilding sector in North America is growing at an accelerated rate. Construction of several types of vessels, which include roll-on/roll-off vessels, offshore supply ships, and containers has significantly increased in recent years.

The industry is characterized by the presence of a few multinational companies catering to the majority demand across the globe. Price fluctuation owing to ever-changing and mostly rising crude oil prices is also creating the need for companies to seek out new ways of increasing revenue generation. Key participants include Royal Dutch Shell, ExxonMobil, Total SA, and British Petroleum.

This report forecasts revenue growth at global, regional, & country levels and provides an analysis of the industry trends in each of the sub-segments from 2014 to 2025. For the purpose of this study, Grand View Research has segmented the global marine lubricants market report on the basis of product and region: