The global meat substitute market size was valued at USD 9.9 billion in 2021 and is expected to expand at a compound annual growth rate (CAGR) of 42.1% from 2022 to 2030. Intensive animal husbandry has been criticized by some sections of society because of its negative effects on the environment and animal welfare. This has led to the emergence of diets that exclude or limit the use of animal products. This is expected to facilitate the growth of the market for meat substitutes. The outbreak of the COVID-19 pandemic has drastically impacted the consumption pattern of traditional meat due to rising health consciousness among consumers. 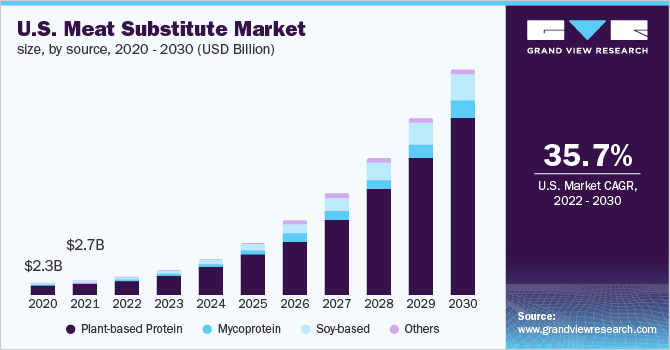 The fear of an increasing number of animal-borne diseases has raised health concerns among consumers, which has resulted in decreased intake of animal products. Consumer awareness of plant-based meat substitutes is rapidly growing, with more people demanding these because of their stated health benefits, such as the prevention of non-communicable disorders, digestive issues, and obesity. Nowadays, consumers are extremely cautious about their health due to increased obesity cases and other diseases, such as cardiac diseases and diabetes.  As a result, consumers are changing their eating habits and incorporating a healthy diet, which is expected to boost the demand for meat substitutes.

The growing consumer awareness of the benefits of a vegan diet is one of the major factors driving global demand for plant-sourced products. Additionally, the health benefit linked with cholesterol-free protein is another key factor promoting the growth of these products in different regions. The enormous growth in the market for meat substitutes is due to a mix of customer concerns and the ability of manufacturers to provide meat replacements with superior flavor, texture, and mouthfeel attributes. Millennials and Gen Z are driving demand for this industry, which is typically fueled by concern for health, climate change, and animal welfare. Many manufacturers have been partnering with brands to offer products in this category.

For instance, in December 2021, Next Meats, a Tokyo-based company partnered with Vegan Meat India to launch meat-free products in the country. Furthermore, a diverse range of products provides consumers with more options and innovative flavors, while also ensuring that their dietary needs are met. Consumers who are also not vegetarians or vegans are exploring plant-based alternatives for a variety of reasons such as more nutrition, weight management, animal welfare, and long-term sustainability of the environment. According to the Good Food Institute, 11.9% of American families bought plant-based meat in 2019, up from 10.5% a year earlier.

Another popular trend is the use of whole veggies and grains on ingredient lists. For health-conscious buyers, seeing known substances on product labels is becoming increasingly vital. Consumers are increasingly looking for packages with reputable third-party certificates. Producers of meat substitutes are now providing products with transparent labeling that show whether the product is non-GMO, gluten-free, vegan, or kosher. As a result, the rising number of consumers preferring plant-based alternatives and significant investment in new product innovation are expected to continue to offer a profitable opportunity for the expansion of the market for meat substitutes.

The plant-based protein segment held the largest revenue share of 34.8% in 2021 and is expected to maintain dominance over the forecast period. Meat shortages in different regions of the world, environmental concerns, and a desire to eat a healthier diet are some of the reasons driving the growth of this segment. Plant-based patties, as well as common snacks like tofu and hummus, are great options for getting daily protein. Young customers, particularly well-heeled ones, are driving the plant protein trend around the globe, with wellness seekers also adding to the category's development.

The products made from plant protein and mycoprotein possess the texture, flavor, and nutritional properties of meat but are made from non-animal sources. Target plant proteins isolated from plants are put through hydrolysis to increase their functionality. Plant proteins are combined with components such as flour, food adhesives, and plant-based oil to create a meat texture. Protein inputs for new plant-based meat are plentiful and reasonably priced. Hence, the volume of meat substitutes from plant-based protein sources is high and is the main factor for the dominance of the segment.

However, the mycoprotein segment is projected to register the fastest CAGR of 43.2% from 2022 to 2030. Owing to the higher content of nutrients like fiber that helps in controlling blood cholesterol and blood sugar, consumers prefer mycoprotein food. Further, mycoprotein makes feel fuller than some animal proteins like chicken. Thus, help prevent overeating and weight gain. In addition, mycoprotein provides all essential amino acids which are rarely found in other protein sources. Quorn, a mycoprotein brand offer super-protein, healthy, meals for consumers.

For vegans and vegetarians, meat alternatives were earlier limited to soya chunks and mushrooms, and cottage cheese. Because of its texture and adaptability, jackfruit, as a newcomer to the market, has been generating a lot of buzz and gaining popularity. Because of its distinct qualities, the fruit is commonly referred to as a superfood because of its numerous nutritional benefits. For instance, in India Wakao Foods has been offering meat-eaters with stir-fries and burger patties prepared from jackfruit.

The retail segment led the market for meat substitutes and accounted for the largest revenue share of 67.3% in 2021. The segment includes all retail outlets such as hypermarkets, supermarkets, convenience stores, mini markets, and departmental stores. Consumers prefer these stores as they offer huge discounts and offers. Further, the majority of the brands launch their product through big chains of supermarkets such as Walmart, Target, and others to reach maximum customers. The foodservice segment is anticipated to register a CAGR of 43.0% from 2022 to 2030. The category includes outlets such as restaurants, hotels, and lounges. The COVID-19 pandemic has led to lockdowns and shutdowns across the world. 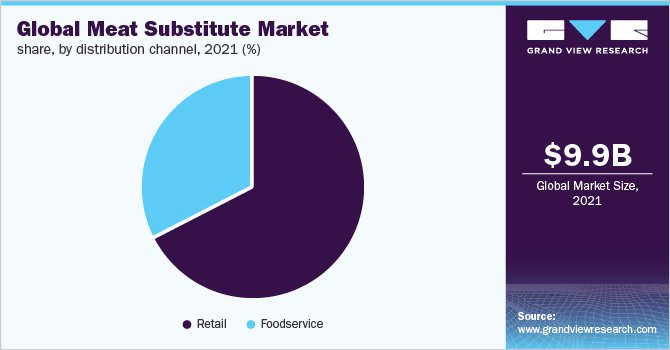 This has led to a reduction in sales from these channels. However, reopening of economic activities across the world, with people focusing on socializing, and parties are likely to increase sales through these distribution channels. One of the key factors driving the global foodservice market is the growing demand for customization and innovation in food menu options. Consumers have a wide range of options for customizing their meals based on their taste, dietary, and financial preferences.

Plant proteins are experiencing huge demand, with retailers offering plant-based protein products and restaurants introducing plant-protein menu innovations. Consumers throughout the world, including vegetarian, non-vegetarian, and flexitarian, are responding with eagerness and enthusiasm for innovative products such as meat-like plant protein burgers, plant protein lattes, and plant-based protein meal kits. Consumers benefit from manufacturers' enthusiastic response to the trend in two ways: availability and price obstacles are reducing as more plant-based protein products are launched in a specialty, conventional supermarket, and foodservice channels.

Europe dominated the meat substitutes market and accounted for the largest revenue share of 39.1% in 2021. The region has been witnessing high demand, both from young and elder consumers. This is primarily due to an increase in vegan and flexitarian consumer base and a rise in awareness among consumers regarding animal welfare. For instance, meat alternatives were essentially non-existent 10 years ago in typically Germany. However, due to the entry of well-known processed companies, Germans are now on a level with Americans in terms of meat substitutes consumption. It's no accident that McDonald's has partnered with Nestlé, a new significant participant in the meatless industry, to offer a vegan burger in Germany. In April 2019, Mcdonald's launched its Big Vegan TS with Nestlé’s vegan patty.

In Asia Pacific, the market for meat substitutes is expected to witness a CAGR of 47.0% from 2022 to 2030. Countries like China and Australia contribute most of the share in the region. Rising health consciousness and social media influence have led to increased consumption of such products in these countries. With a shift away from animal protein consumption and toward a more plant-based diet, the demand for high-quality plant-based substitutes has soared. Previously, there were few possibilities for high-quality vegetarian and vegan substitutes, and they were generally made with unhealthy highly processed ingredients.

As a result of the COVID-19 pandemic, Asian consumers are more concerned about food safety, health, and the environment, and many are actively changing their diets to live healthier and more sustainable lifestyles. There is no doubt that Asia gives a good potential for new, tasty foods that customers would desire as their first choice, and not as an alternative. This can be visible in Southeast Asia where there has been a growth of more than 20% in meat substitute launches from 2019 to 2020.

The market for meat substitutes comprises companies with a stronghold in meat substitutes and is still developing, where new entrants are launching products and other key players in the market are planning to launch their products due to the increasing health concern owing to rising animal-borne diseases across the globe. Some of the initiatives taken are:

Some of the prominent players in the meat substitutes market include:

This report forecasts revenue growth at global, regional, and country levels and provides an analysis of the latest industry trends in each of the sub-segments from 2017 to 2030. For the purpose of this study, Grand View Research has segmented the global meat substitute market report on the basis of source, distribution channel, and region:

How big is the meat substitutes market?

What is the meat substitutes market growth?

Which segment accounted for the largest meat substitutes market share?

b. Europe dominated the meat substitutes market in 2021 owing to growing demand from vegan and flexitarian in the country.

Who are the key players in the meat substitutes market?

What are the factors driving the meat substitutes market?

b. Key factors that are driving the meat substitutes market growth include rapidly growing consumer awareness about the benefits of eating vegan and plant-based diets, the role of such products in the prevention of diseases such as obesity and digestive issues.