The global medical oxygen concentrators and oxygen cylinders market size was valued at USD 2.9 billion in 2019 and is expected to grow at a compound annual growth rate (CAGR) of 4.2% from 2020 to 2026. Growing incidence of Chronic Obstructive Pulmonary Diseases (COPDs) and increasing technological advancements for the miniaturization of the oxygen concentrators are some of the key factors expected to drive the market over the forecast period. 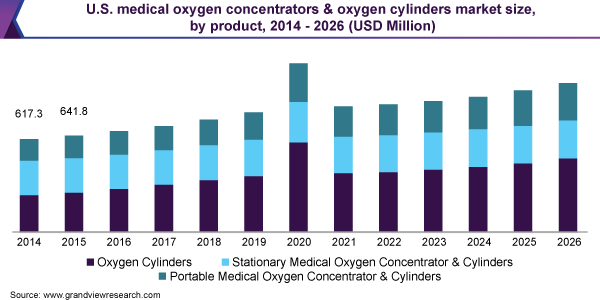 In addition, manufacturers are introducing new technologies in concentrators that aim to improve the quality of care. For instance, in February 2018, GCE healthcare launched a remote monitoring platform, called Clarity for oxygen concentrators. The technology monitors the patients and regularly sends the data related to oxygen purity, device location, and battery life to provider and patient’s family members. Such technological advancements in portable concentrators attract more customers and hence create demand for oxygen concentrators.

Increasing prevalence of COPD and other lung disorders is another key factor boosting the market growth. According to the U.S. government, in 2017, over 16 million U.S. adults were diagnosed with COPD, around 9 million with chronic bronchitis, and 3.5 million with emphysema. In addition, COPD is the cause of over 7 million emergency department visits each year in the U.S.The long-term use of supplemental oxygen has improved the survival rate of patients with COPD. Hence, rising prevalence of COPD and other lung diseases and dependence of COPD patients on oxygen therapy products are among the key factors boosting the demand for oxygen concentrators and cylinders.

Furthermore, several campaigns and programs have been launched by many government and non-government organizations to educate citizens about COPD and ways to manage it. For instance, the National Heart, Lung, and Blood Institute (NHLBI) and the WHO formed the Global Initiative for Chronic Obstructive Lung Disease (GOLD) with an objective to increase awareness about COPD and help people in management of the disease. Moreover, the American Lung Association promotes awareness about COPD.

Growing healthcare expenditure, better medical facilities, and rapid technological advancements have helped increase the life expectancy of people globally. However, geriatric population is more susceptible to cardiovascular disorders and lung diseases owing to a weak immune system. Elderly people have a less pulmonary reserve and reduced cough strength due to anatomic changes and muscle loss. Hence, they are at a high risk of developing lung disorders and various breathing problems. According to the National Institutes of Health Census Bureau, in 2016, around 8.5% of the people worldwide, i.e., around 617 million people were aged 65 and above. Moreover, this number is expected to reach 1.6 billion by 2050.

As most of the critical cases of COVID-19 require some form of artificial ventilation, demand for wall-mounted oxygen concentrators, and piped/canned oxygen is witnessing a significant rise. The same is evident in the recent movements undertaken by market participants. For instance, Linde, one of the largest medical gas companies, is rapidly increasing its oxygen production. The company is also working closely with providers across the globe to anticipate the demand and ramp up the deliveries.

Furthermore, ResMed, one of the leading participants of the oxygen concentrators market, is poised to witness significant growth in the next 2-3 quarters due to its large portfolio of respiratory devices. To meet the rapidly increasing global demand, the company is increasing its masks manufacturing capacities by 10 times and ventilator manufacturing by 2-3 times. The company has a capacity of manufacturing nearly 1 million devices annually, which will certainly help the company to play a significant role to curb this situation.

The stationary medical oxygen concentrators are expected to witness slower growth as compared to portable devices. The older people with limited movements opt for these medical devices. Hence, its adoption in countries with a large geriatric population is increasing. Moreover, stationary concentrators are more economical, thus their adoption is higher in developing and underdeveloped countries, wherein healthcare expenditure and standard of living are still low.

Continuous flow accounted for the largest revenue share of 87% in 2019. Rapid technological advancement pertaining to new product development is expected to boost the usage of medical oxygen concentrators. Furthermore, ongoing use of respiratory equipment for oxygen therapies is anticipated to boost the segment growth. Elderly population and bedridden patients are the main targeted groups for continuous flow oxygen concentrators. In addition, the devices are not fitted with any breath detection technology, hence they are cheaper as compared to pulse flow technology.

Pulse flow technology in oxygen concentrators is expected to witness the fastest growth over the forecast period owing to technological advancements. The technology is more efficient and convenient as compared to continuous flow and is majorly used by the patients who take 450 mL to 1250 mL per minute of oxygen in short pulses. It is mostly suitable for users with an active lifestyle. Hence, working professionals, regular air travelers, and sports players suffering from COPD or other breathing issues are rapidly opting for concentrators based on this technology.

In terms of revenue, the home care segment dominated the overall medical oxygen concentrators and oxygen cylinders market with a revenue share of 56.4% in 2019. Increasing demand for home healthcare oxygen therapies, coupled with rising demand for pure oxygen and technological advancements, such as miniaturization of these medical devices, is expected to contribute to the segment growth over the forecast period. Improving standard of living and growing usage of home-based therapy, especially in developed regions, such as North America and Europe, are the major factors driving the segment. Moreover, presence of a large geriatric population in countries, such as Germany, Japan, Italy, Monaco, and Austria, is expected to fuel segment growth over the forecast period. 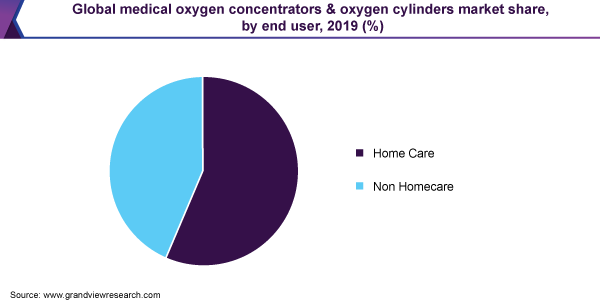 The non-homecare segment has witnessed significant growth in the year 2020 due to the sudden outbreak of COVID-19 across the world, which has increased the demand for supplemental oxygen therapy products, such as wall-mounted and repurpose home oxygen equipment, to combat against this pandemic. The non-homecare segment mainly includes the use of oxygen therapy products outside home settings, such as hospitals and clinics. Rise in the number of hospitals and other healthcare settings and high per capita healthcare expenditure in North America and Europe are the key factors influencing this segment's growth.

In 2019, North America accounted for the largest revenue share of 32.4%. Growing geriatric population in the region is one of the significant factors contributing to market growth. According to the data published by the UN, in 2014, it was estimated that over 70 million people in North America were above 60 years of age. This demographic is prone to various respiratory disorders due to weaker immunity system and low oxygen intake capacity. Furthermore, government initiatives such as the authorized use of portable oxygen concentrators during air travel by the Federal Aviation Administration (FAA) and increasing prevalence of severe chronic obstructive pulmonary disorder due to unhealthy lifestyles are contributing to the regional market growth.

Asia Pacific is anticipated to be the most lucrative market during the forecast period. Key factors fueling regional market growth include rapidly increasing geriatric population and prevalence of lung disorders. It is estimated that one in every four people in the region will be over 60 years of age by 2050. Living and health standards have increased significantly in the more developed economies of the region. Increase in life expectancy, healthcare expenditure, and awareness regarding available technologies are some of the factors expected to contribute to regional market growth over the forecast period.

This report forecasts volume and revenue growth at the global, regional, and country levels and provides an analysis of the latest industry trends and opportunities in each of the sub-segments from 2014 to 2026. For the purpose of this study, Grand View Research, Inc. has segmented the global medical oxygen concentrators & oxygen cylinders market report on the basis of product, technology, end-use, and region:

How big is the medical oxygen concentrators and oxygen cylinders market?

b. The global medical oxygen concentrators & oxygen cylinders market size was estimated at USD 2.9 billion in 2019 and is expected to reach USD 3.9 billion in 2020.

What is the medical oxygen concentrators and oxygen cylinders market growth?

b. The global medical oxygen concentrators & oxygen cylinders market is expected to grow at a compound annual growth rate of 4.2% from 2020 to 2026 to reach USD 3.7 billion by 2026.

Which segment accounted for the largest medical oxygen concentrators and oxygen cylinders market?

b. The Portable Medical Oxygen Concentrators segment dominated the medical oxygen concentrators & oxygen cylinders market with a share of 35.2% in 2019. This is attributable to increasing demand for lightweight and portable concentrators, a growing geriatric population base, and an increasingly younger population suffering from COPD.

Who are the key players in medical oxygen concentrators and oxygen cylinders market?

What are the factors driving the medical oxygen concentrators and oxygen cylinders market?

Unusually high demand for mechanical ventilators is resulting in a significant shortage of these devices in key countries affected by the Covid-19 outbreak. The unmet demand for mechanical ventilators is forcing biomedical engineers and scientists to create makeshift ventilators using respiratory devices such as PAP, manual resuscitators, nebulizers, oxygen concentrators, and others. This is acting as a pivotal factor for the growth of the oxygen concentrators market in recent times. We at GVR are trying to quantify the impact of this pandemic on the oxygen concentrators market. Get your copy now to gain deeper insights on the same.