The global medical robotic systems market size was valued at USD 7,470.7 million in 2014 and is expected to grow at a double-digit CAGR over the forecast period. Increasing demand for accurate laparoscopic surgeries, growing need for surgical procedures in the geriatric population, and rising cases of trauma injuries are the factors driving the growth of this market. Higher per capita healthcare spending and technological advancements in surgical medical equipment are projected to drive the further penetration of medical robotics in emerging economies.

This continuous development of medical technologies indicates the rapidly advancing medical robotic systems. ProvenCare an insurance initiative by Geisinger Health System provides patients with guaranteed insurance cover after 90 days of follow-up admissions. This initiative will help to reduce surgical errors and complications along with a reduction in the cost of surgery.

The future scope of robotic technology is to explore new functions for existing procedures, which is expected to drive the demand for medical robotics. The market is constantly witnessing a rising number of technology transfer collaborations with third-party suppliers to develop a new applications for robotic systems.

According to the FDA, the use of robotics in the U.S. has increased from 25,000 to 450,000 per annum from 2005 to 2012. According to National Cancer Institute (NCI), it is estimated that in 2014, about 80% of surgical prostatectomies had been performed using medical robotics, as compared to only 1% of all the surgeries in the year 2001. Increasing penetration of technologically advanced robotics systems is expected to fuel demand over the period.

Further, the technological development that reduces the drawbacks of laparoscopic surgeries which includes Da Vinci Surgery with higher precision and delivering suitable outcomes is anticipated to drive the market growth over the period. The growing rate of surgical procedures is expected to fuel the demand for medical robotics from 2014 to 2022.

Growing acceptance of assistive & rehabilitation systems for Physiotherapy in the treatment of stroke and neurological disorders related to movement disability is expected to drive the growth. With increasing importance in therapy treatments, the number of patients being treated with medical robots is also increasing. The Nonmedical hospital product segment is expected to emerge as the fastest-growing segment with a CAGR of 16.8% over the forecast. The centralization of establishments and the growing healthcare IT market are the factors promoting growth in demand for medical robotic systems.

By application, the robotic system is segmented into four applications, which include neurology, orthopedics, laparoscopy, and others. The neurology segment is anticipated to account for the fastest growth with a CAGR of 16.7% over the period owing to the global increase in neurological disorders such as Alzheimer and Depression. Technological developments of hardware and software of the NeuroMate system and in the field of robotic neurotechnologies with an improved scope of ergonomics and neurology will account for high penetration of the medical robotic systems. Additionally, the advent of innovative technologies such as the invention of RoboDoc by the ULCA Neurosurgery (a motile robot for routine monitoring of patients operated by the doctor himself without him moving around) will facilitate growth.

Laparoscopy accounted for the highest share in the application segment with a CAGR of 12.3% in 2014. The development of new systems with enhanced maneuverability & magnification, easier device handling, and upgraded device micromotions in the patient’s body will result in the precision of surgical procedures. Also, these robotic systems have proven to be technically viable and are specially designed to meet the needs of surgeons. The market growth can be attributed to the growing geriatric population, increasing demand for laparoscopic diagnostic, and therapeutic procedures, and an increasing number of unhealthy lifestyle habits such as fast food & alcohol. These factors are expected to drive the growth of targeted surgeries which in turn is expected to fuel the market growth between 2015 to 2022.

Orthopedics robotic systems are anticipated to be the second-fastest segment by application over the forecast. This segment is expected to grow at a CAGR of 14.2% between 2015 and 2022. Significant developments in terms of software used for Total Hip Arthoplasty (THA), Total Knee Arthoplasty (TKA), and Anterior Cruciate Ligament Reconstruction (ACL) trigger the demand for minimally-invasive robot-assisted surgeries. The growing number of musculoskeletal conditions such as rheumatoid arthritis, low back pain, osteoarthritis, and osteoporosis is expected to gear the demand for robot-assisted surgeries during the period.

North America dominated the medical robotic systems with 49.7% of the total share in 2014, whereas emerging economies such as the Asia Pacific are anticipated to exhibit the fastest growth with a CAGR of 15.6% over the forecast. The increasing geriatric population with weak bone density levels and injuries encountered during accidents are expected to positively reinforce market growth in the coming years. 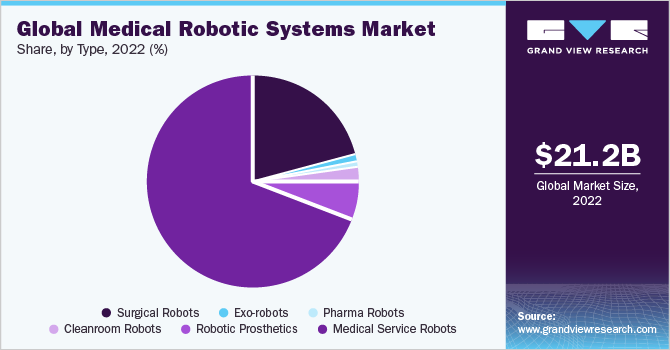 The Asia Pacific is projected to grow at a rapid rate over the period due to the presence of emerging opportunities, improving healthcare infrastructure, and rising patient awareness. Growing penetration of minimally invasive surgeries is one of the significant growth drivers for this market. The introduction of new technologies, such as capsule robot systems, developed software, and imaging systems, to minimize the complications in surgical interventions is expected to boost the market growth over the period. The major product segments, contributing to the growth of Asia Pacific include products such as surgical robots and non-invasive radiosurgery systems.

Europe’s medical robotics system market is anticipated to follow the Asia Pacific market with a CAGR of 11.7% from 2015 to 2022. Rapidly advancing surgical procedures aided by technology have been increasingly replaced by robot-assisted surgeries and effective procedures that account for fewer health risks, speed-up patient recovery, and minimal scarring. The presence of such factors is expected to boost market growth.

Some of the prominent players in the medical robotic systems industry include MAKO Surgical Corp, Reninshaw Plc., Varian, Accuray, Intuitive Surgical Inc, and Health robotics S.R.L. Market players are employing strategies to increase their market share by increasing penetration in untapped economies and thereby broadening their prospects for profitability. Furthermore, the major players are adding new products to maintain their competitive edge, thus contributing to this market.

This report forecasts revenue growth at global, regional, and country levels and provides an analysis of the latest industry trends in each of the sub-segments from 2012 to 2022. For the purpose of this study, Grand View Research has segmented the global medical robotic systems market report on the basis of product, application, and region: