The global MEMS microphone market size was valued at USD 1,207.7 million in 2018 and is expected to grow at a compound annual growth rate (CAGR) of 14.4% from 2019 to 2025. The growth of the market can be attributed to the increasing demand for smartphones, IoT-enabled devices, virtual reality (VR) headsets, hearing aids, and other consumer electronics as well as to the smart city initiatives being pursued in various parts of the world. The rising levels of disposable income that have triggered the demand for smartphones are expected to emerge as one of the major factors driving the demand for MEMS microphones. At the same time, the growing aging population, which is suffering from hearing impairment, has triggered the demand for hearing aids featuring superior-quality microphones, which is also expected to drive the market growth over the forecast period. 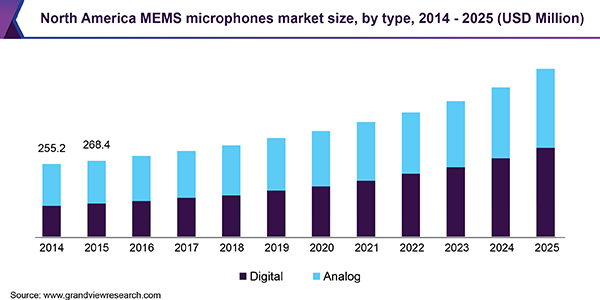 Another area where MEMS microphones have been making strides is in the integration of IoT and VR. Such an integration envisages creating a surreal experience for users by immersing them within the virtual world. The recent construction of VR Star theme park in China, purely for consumers' immersive experience can be considered as an example of such an integration. This, in turn, is expected to drive the market growth over the forecast period.

Based on type, the global MEMS microphone market has been further segmented into digital and analog. The analog segment is expected to witness steady growth over the forecast period. There is a huge demand for analog output-type microphones for use in the majority of the smartphones. These microphones typically account for approximately 70%-80% of the global market at present. Samsung is the only company using digital MEMS microphones in its smartphones.

When compared to analog output-type microphones, digital output-type microphones are more expensive and less sensitive to electromagnetic interference. Hence, they are preferred in laptops, particularly because of their immunity to the friction caused by the liquid crystal display (LCD) unit. As such, the digital segment is expected to register a higher growth rate as compared to the analog segment. Most of the MEMS microphones launched in the future would be digitally-enabled microphones and analog microphones would gradually become obsolete.

Based on SNR, the market for MEMS microphones has been further segmented into very high (>=64dB), high (>=60dB, <64dB), and low (<=59dB). The very high (>= 64dB) SNR MEMS microphones capture sounds with high audio quality and are capable of easily distinguishing a sound from background noise. Hence, they are mostly used to capture sound from far-field applications. The very high (>=64dB) segment is expected to register a higher growth rate as a result, followed by the high (>=60dB, <64dB) and low (<=59dB) segments.

The high (>=60dB, <64dB) SNR MEMS microphones are usually used in camcorders, tablets, laptops, smartphones, and earphones, among others. They have been highly popular before the introduction of piezoelectric technology-based MEMS microphones with a higher SNR. The low (<=59dB) SNR MEMS microphones offer similar or better audio quality as compared to the electret condenser microphones. Their miniature size serves as an added advantage. Miniaturization of microphones particularly aids in better functioning of electronic devices.

On the other hand, piezoelectric technology offers a better SNR due to the usage of scandium-doped AIN film, which also aids in eliminating the sound damping. One of the main features of the piezoelectric products is that they contribute to a steady performance and are less susceptible to deterioration even after used for longer periods. They are also free from the capacitive gap that can be sensitive to dust and moisture and can hence offer a very fast pick up time. The piezoelectric segment is expected to gain more traction over the forecast period owing to the huge demand for piezoelectric technology-based microphones for use in audio devices, such as portable smart speakers, car infotainment systems, and loudspeakers, among others.

Based on application, the market for MEMS microphones has been further segmented into mobile phones, other consumer electronics, IoT & VR, hearing aids, and others. The hearing aids, other consumer electronics, and IoT & VR segments are anticipated to register high growth rates over the forecast period. A rise in the levels of disposable income, particularly in emerging economies, has led to an increase in the demand for smartphones and other sophisticated consumer electronics. This, in turn, is expected to increase the adoption of MEMS microphones in the mobile phones segment over the forecast period. Similarly, advances in technology have paved the way for seamless integration of IoT with VR platforms, thereby driving the demand for high-quality microphones. Of late, miniaturization has also resulted in an upsurge in the adoption of superior-quality microphones for use in hearing aids. Miniaturization has particularly aided in maintaining the aesthetics of hearing aids without compromising with the capability to capture the right audio sounds and canceling the background noise, thereby helping the aging people and others suffering from hearing impairment. 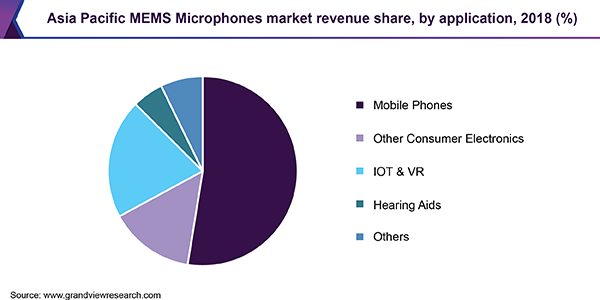 The other segment covers industries and end-use verticals, such as oil & gas, construction, robotics, telepresence, manufacturing, automation, automotive, and medical telemetry, among others. MEMS microphones are expected to be increasingly adopted by these industries and end-use verticals over the forecast period. For instance, in the automotive industry, MEMS microphones are used for beamforming, active noise cancellation, infotainment systems, and diagnosis of engine problems for the prevention of potential crashes. Similarly, in medical telemetry, MEMS microphones are used as part of the wireless radio technology to monitor the pulse and respiration rates of patients remotely and raise alerts in case of any medical emergency.

Among the key regional markets covered in the report, Asia Pacific is dominating the MEMS microphone market owing to the presence of well-established manufacturing facilities in China, the Philippines, and Thailand, among others. The Asia Pacific regional market is expected to register the highest CAGR over the forecast period as a result of the continued proliferation of smartphones, hearing aids, other consumer electronics, and IoT & VR devices in the region. The MEA regional market is also expected to witness considerable growth. Given that VR is still in its nascent stages, several hackathon events are being convened frequently to popularize the VR technology in the MEA regional market, thereby increasing the demand for MEMS microphones in the region.

The market is highly consolidated with few companies accounting for a major share. To stay ahead in the intensifying competition, the key players are emphasizing on investing in research and development activities and entering into partnerships with established players. They are also improvising their distribution strategies by collaborating with distributors to have a global reach.

This report forecasts revenue growth at global, regional, and country levels and provides an analysis of the industry trends in each of the sub-segments from 2014 to 2025. For this study, Grand View Research has segmented the global MEMS microphones market report based on type, SNR, technology, application, and region:

How big is the mems microphones market?

What is the mems microphones market growth?

Which segment accounted for the largest mems microphones market share?

b. Asia Pacific dominated the MEMS microphones market with a share of 51.1% in 2019. This is attributable to the growing adoption of smartphones, hearing aids, and IoT & VR devices coupled with the presence of established manufacturing facilities in the region.

Who are the key players in mems microphones market?

What are the factors driving the mems microphones market?

b. Key factors that are driving the market growth include increasing demand for smartphones, IoT-enabled devices, virtual reality (VR) headsets, hearing aids, and the growing adoption of piezoelectric technology for far-field audio applications.