The global menthol cigarette market size was valued at USD 80.0 billion in 2018 and is expected to expand at a CAGR of 3.1% from 2019 to 2025. The market growth is attributed to factors like fresh, clean, cooling, and anesthetic (painkilling) effect, the ability of menthol to reduce the harshness of smoke, and growing popularity among the younger generation. Moreover, menthol cigarette makes smoke smooth and easier to inhale by reducing the harshness of smoke, thereby making it more popular among women, the young generation, and beginner smokers. 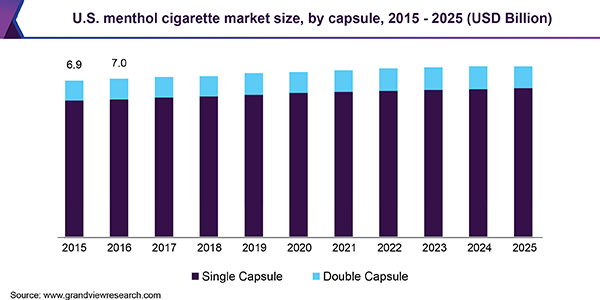 Many young consumers and women are attracted to the smell and refreshing feel they get by smoking menthol cigarettes. The number of menthol cigarette smokers are constant whereas there is a decline in the smokers of non-menthol products, as menthol decreases the metabolism of nicotine and increases the amount of addictive substance in the body, making it more difficult to quit. Along with these factors, the positive association such as cooling sensation, sensory excitation, and minty taste makes it more difficult to quit.

By capsule, the market is segmented as a single capsule and double capsule. Single capsule accounted for the largest share of 88.8% in 2018. This type of capsule allows the consumer to vary the strength of flavor by bursting liquid ball inside the cigarette filter. This innovation in the industry has given consumers as an option as when to burst the capsule for the flavor. The segment growth is attributed to the fact that it allows the user to consume cigarettes with flavor or without flavor as per there convenience.

The double capsule is expected to register the fastest CAGR of 3.3% over the forecast period. Consumers are increasingly favoring this type as it comes in two flavors, thereby allowing consumers to experience two different flavors. Rapid growth in the demand is attributed to growing consumption among the younger generation and women. Moreover, established menthol cigarette smokers who smoke for taste and flavor are inclining more towards the consumption of double capsule products due to its long-lasting flavor. 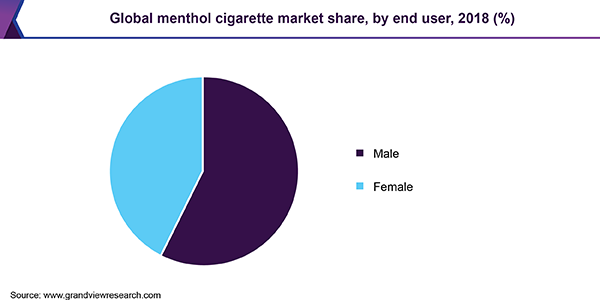 The female segment is expected to expand at a CAGR of 2.9% over the forecast period. In regions like North America, Europe, and Central and South America, female accounts for a significant menthol cigarette market share. In Europe, females accounted for 57.5% share in 2018. Among all women, 40% of women prefer menthol cigarettes, whereas only 31% of males prefer these over others.

Asia Pacific accounted for the largest share of 64.2% in 2018. The region is estimated to witness the fastest growth over the forecast period. China alone accounted for approx. 50.0% of the APAC market in 2018 owing to rapid innovation in products and increasing disposable income and purchasing power, nullifying the negative impact of taxation. The number of product launches from the year 2016 to 2017 was close to 300 new products, accounting for 50% of the product launches from the year 2012 - 2017. In China, males accounted for 52.2% share of menthol cigarette consumption in 2018, whereas females accounted for 47.8% share.

Central and South America is the second-fastest-growing region with a CAGR of 3.2% owing to the growing popularity of single and double capsule products as consumers are more likely to perceive benefits such as smoothness and less harshness than other cigarettes. Female accounts for a larger share in menthol cigarette smoking over men in the region and is expected to witness faster growth than male.

This report forecasts revenue growth at the global, regional, and country levels and provides an analysis on the latest industry trends and opportunities in each of the sub-segments from 2015 to 2025. For the purpose of this study, Grand View Research has segmented the global menthol cigarette market report on the basis of the capsule, end-user, and region:

How big is the menthol cigarette market?

What is the menthol cigarette market growth?

Which segment accounted for the largest menthol cigarette market share?

b. Asia Pacific dominated the menthol cigarette market with a share of 64.7% in 2019. This is attributed to rapid innovation in products, increasing disposable incomes and purchasing power of consumers in developing countries such as China and India.

Who are the key players in menthol cigarette market?

What are the factors driving the menthol cigarette market?

b. Key factors that are driving the market growth include fresh flavor characteristics, increased ability of menthol to reduce the harshness of smoke, and growing popularity among younger generation.