The global metal finishing chemicals market size to be valued at USD 13.52 billion by 2025 and is expected to grow at a compound annual growth rate (CAGR) of 4.5% during the forecast period. The growing automotive industry in developing countries, such as Mexico, India, China, Thailand, and Indonesia is projected to drive the market. Moreover, government initiatives, such as the Make in India policy by the government of India are some of the major drivers for automotive manufacturing and development in these regions, which is likely to further fuel the growth. Rising demand for the product can be attributed to the properties of metal finishing chemicals, such as resistance to corrosion, electrical, wear, torque, hardness, and chemicals coupled with electrical conductivity, appearance, and reflectivity to the metal surface. 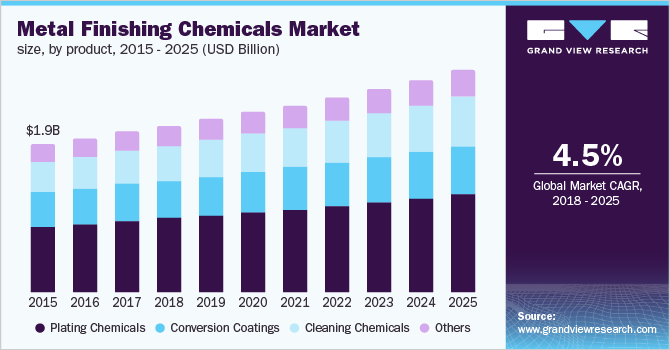 Other industries that find significant application of metal finishing chemicals industrial machinery and transportation equipment. Growing demand from India, China, Japan, Korea, and Taiwan for manufacturing electrical components, such as connectors, semiconductor devices, and circuit boards are also anticipated to bolster the market over the forecast period.

Agencies, such as EPA, REACH, and OSHA has enforced strict regulations on wastewater management and hazardous waste disposal for metal finishing industries. The clean water act by the EPA developed strict guidelines for wastewater from the industries as it contains contaminants including cyanides, organic substances, suspended solids, and heavy salts. These contaminants are environmentally hazardous and pose potential health risks, which is likely to hamper the market growth over the forecast period.

The market is being driven by the growth of the automobile sector in emerging nations such as India, China, Thailand, Mexico, and Indonesia. In addition, the constant rise of the global automobile sector has resulted in increased demand for electroplating. This aspect has a substantial impact on the market's growth.

In  the forecast period, the growing need for flawlessly polished metal in construction machinery, electrical equipment, and machinery components is expected to increase the demand for chemicals. The global market is driven by factors such as the increase in consumption of durable and wear resistant products, expansion of the printed circuit board industry, the increased use of metal finishing chemical compounds in aerospace repair, maintenance, and overhauls, and the growth in demand from Asia-Pacific economies.

Market expansion is hampered by several limitations. During the forecast period toxic waste disposal, wastewater management standards, and the replacement of metals with more cost effective plastics are expected to serve as market constraints for metal finishing chemicals.

The metal finishing chemicals industry is seeing significant improvements in the field which presents attractive growth potential. Furthermore, in the coming years, the increased need for bio based cleaning agents, fast urbanization and changing lifestyles will provide significant chances for the market to expand.

Plating chemicals emerged as the largest product segment in 2017. These chemicals are known to provide superior surface properties, such as corrosion resistance, wear resistance, hardness as well as electrical conductivity to the metal surface.

The cleaning chemicals segment is projected to witness the fastest growth over the forecast period on account of the increasing usage of these products in application industries, such as aerospace, automotive, construction, and electrical and electronics.

Chromate conversion is mainly used on aluminum surfaces while zinc and iron phosphate conversion are used on steel substrates. Increasing usage of conversion coatings for metal pretreatment as it induces anti-corrosive properties on substrates is expected to drive the demand in the forthcoming years.

In 2017, electroplating emerged as the largest process segment and held approximately 40.0% of the total market share in terms of revenue. This process is majorly used in automotive plating and electrical and electronics plating. It is a cheaper alternative to electroless plating and galvanization, which is anticipated to be the major driving force for the segment. However, strict environmental regulations imposed on chromium and cadmium electroplating is expected to hamper the market expansion over the forecast period.

Electroless plating is likely to be the fastest-growing process segment on account of the increasing usage of the process in plating printed circuit boards and consumer durables. Also, the ability of an electroless plating process to provide an even finish without the use of electrical power is expected to drive market growth.

Automotive is anticipated to be the fastest-growing application segment over the forecast period on account of ever-increasing demand and production of commercial and passenger vehicles in emerging countries, such as India, China, Thailand, and Indonesia. The growing automotive industry is the result of increasing disposable income as well as government initiatives and policies encouraging growth. 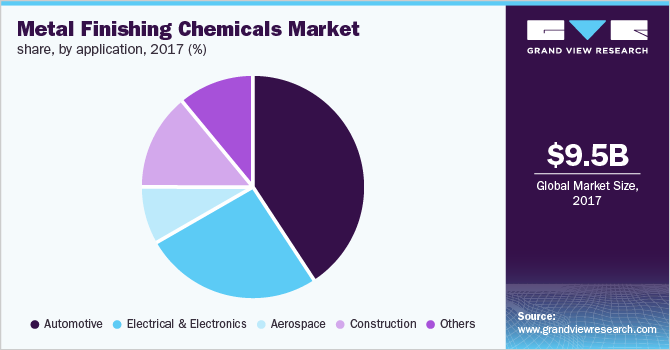 The global aerospace and defense industry is expected to witness steady growth over the forecast period owing to the increasing government expenditure on aircraft production and defense sectors. This growth has accelerated the equipment replacement cycle and has increased the passenger travel demand which is propelling the use of the product in aerospace maintenance, repair, and overhaul activities.

North America led the market in 2017 due to the presence of a large number of and growing manufacturing and automotive sector. However, Asia Pacific is expected to witness the fastest CAGR during the forecast period owing to increasing automotive manufacturing in countries, such as China, India, Indonesia, and Thailand. Also, the growing electronics and electrical sectors in Korea, China, Japan, India, and Taiwan will fuel demand. 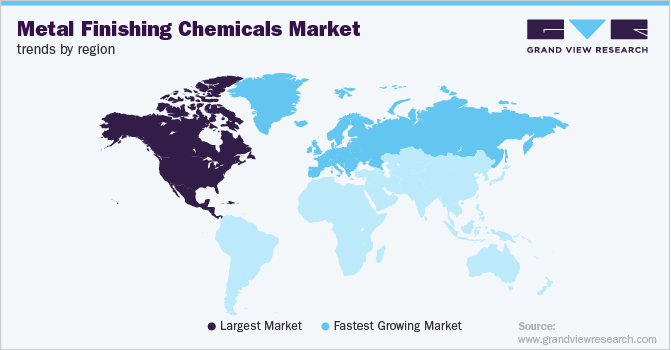 Europe was estimated to be the second-largest regional segment in 2017 and held approximately 29.0% of the total market share in terms of revenue. It is likely to witness stable growth over the next few years on account of growing automotive development, manufacturing, and demand from developed nations, such as Spain, France, and Italy. Moreover, the existence of numerous manufacturers, such as Coventya, BASF SE, Atotech Deutschland, Elementis, Henkel AG, and Rashid, is expected to propel the regional growth shortly.

The majority of manufacturers focus on Europe and North America while keeping the distribution networks across the other regions. Europe and North America are estimated to be the largest markets for these chemicals on account of growing demand from aerospace, automotive, manufacturing, and electrical and electronics industries among others. There is a significant presence of numerous regional industry players specifically those based in the U.S., Canada, Germany, U.K., Japan, and China. This scenario is projected to fuel the overall competitive environment in near future.

This report forecasts revenue growth at the global, regional, and country levels and provides an analysis of the latest industry trends in each of the sub-segments from 2014 to 2025. For this study, Grand View Research has segmented the global metal finishing chemicals market report based on products, process, application, and region: 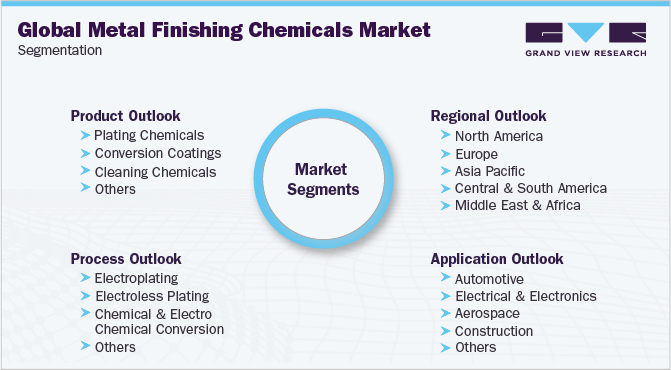