The global construction equipment market size was estimated at USD 76.87 billion in 2017. It is expected to expand at a CAGR of 4.8% from 2018 to 2025. Rising government funding for development of advanced public infrastructure is anticipated to boost demand for off-highway equipment. Additionally, development of rental market for these machineries in Europe and North America is expected to foster market growth.

Residential segment is witnessing high demand for construction equipment owing to rapid pace of urbanization in major countries. Urbanization triggers not only the requirement for residential space but also other infrastructures such as schools, hospitals, roads, and commercial spaces. To cater to demand for these public infrastructures, governments spend a substantial amount on construction activities. For instance, Chinese government spent about 8.5% of its GDP on development of roads between 1992 and 2011.

Off-highway machinery are manufactured using high strength materials as they are subjected to harsh environments. Thus, they exhibit a longer lifespan of 7 to 10 years. Additionally, the machinery itself is an expensive commodity, hence medium and small-scale builders or contractors often lack financial capacity to own it. Also, many construction projects require such machinery on temporary basis.

Thus, small builders or contractors prefer procuring used equipment on rental basis. Given the long lifespan and lack of regular use; most companies prefer renting out old machinery to gain profits. Many companies are now exploring opportunities in rental business owing to potential of high profitability. Hence, rise in rental of used machinery is anticipated to boost overall market expansion in near future.

On the basis of product, the market can be segmented into earth moving, material handling, and concrete and road construction machinery. Earth moving machinery was the dominant product segment and valued at USD 50.83 billion in 2017. Demand for large earth moving machines is escalating with increased requirement from mining sector. This machinery is sturdy and offers enhanced productivity. The concrete and road construction machinery segment is anticipated to expand at the highest CAGR of 7.0% from 2018 to 2025.

Among different large machineries, excavators dominated the market with over 70% market share in 2017. Countries such as U.S., China, and India among others have a huge demand for mini excavators and other such machines, owing to a large number of construction and mining projects. The loader segment is projected to gain much traction by 2025.

Demand for material handling machinery such as a crane is high in developed countries. Rise in establishment of enormous skyscrapers and commercial buildings is expected to drive this demand in near future. Truck-mounted cranes accounted for the largest market share in 2017, with crawler cranes anticipated to expand at a rapid growth rate over the forecast period.

Growing investment in road projects has boosted requirement of concrete and road construction machinery such as concrete mixer and pavers. The segment accounted for over 57% market share in 2017. Demand for construction pumps is expected to further escalate by 2025, owing to adoption of powerful pumps for building of skyscrapers and other mega projects. 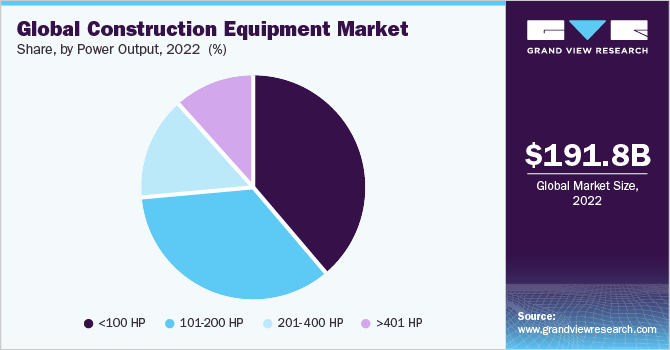 Developing countries such as China and India are investing heavily in road construction projects. For instance, Indian government has initiated huge road development projects such as Ganga Expressway and Bharatmala project. This is anticipated to trigger growth of the overall market in near future.

North America was dominant in the global construction equipment market, with a value of USD 27.88 billion in 2017. The regional growth can be attributed to rising demand for steer skid loaders. North America is expected to account for over 75% market share for skid steer loaders. Moreover, the region has moderate growth for backhoe loaders, whose sale has witnessed a decline in Europe and Asia Pacific in recent years.

Despite being one of the highly developed global regions, North America persists in high demand for large equipment such as motor graders and loaders. It is also one of the most prominent markets for dump trucks. The region is considered to be growing horizontally - new constructions are built on new lands; unlike Europe and Japan where constructions are more vertical- in forms of skyscrapers and buildings.

China has witnessed a decline in sales of heavy construction equipment from 2012 to 2016. Devaluation of Chinese currency further affected the demand in 2016. However, the country bounced back on track in 2017 with around 35% market share in the Asian market. China has a large number of manufacturing facilities for heavy construction equipment. Many global companies outsource manufacturing functions to Chinese factories owing to low production and labor costs and availability of better manufacturing facilities.

Being one of the most prominent markets, China is expected to witness the highest regional CAGR over the forecast period. Other Asian countries such as India and Indonesia are among the most promising regional markets. Governments of these countries are investing considerable funds in public infrastructure development, which is a good sign for overall market growth.

Mergers and acquisitions is a key strategy implemented by established market players. For instance, in 2017, Atlas Copco AB acquired Erkat Spezialmaschinen & Service GmbH, a manufacturer of drum cutter attachments for large and mini excavators. The acquisition helped the former improve quality of its mini excavator buckets.

This report forecasts revenue growth at global, regional, and country levels and provides an analysis of latest industry trends in each of the sub-segments from 2015 to 2025. For the purpose of this study, Grand View Research has segmented the global construction equipment market report on the basis of product and region: