The global metal recycling market size was estimated at USD 957.8 billion in 2019 and is predicted to register a compound annual growth rate (CAGR) of 4.9% from 2020 to 2027. The increasing demand for metals coupled with a rising focus on conservation of natural resources and reduction in greenhouse gas emissions is the crucial factor driving the market growth. Metal recycling allows manufacturers to procure raw materials for the production of finished goods without degrading their properties.

Furthermore, it is cheaper than the primary production of metal. In addition, the environmental imperative also plays a significant role in driving industry growth. China emerged as the largest player in the global industry in 2019. According to World Steel, China is the largest producer of steel and it produced 996.3 million tons in 2019 and accounted for roughly 53% of the global crude steel production. China sources roughly 20% of the raw material required for steel making from scrap recycling. 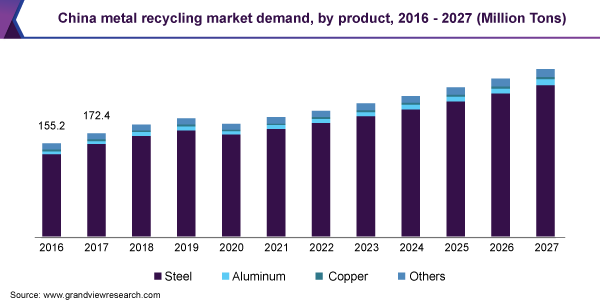 The number of scrap processing plants and local collection centers in China is predicted to increase significantly over the coming years. The ban on the operation of small induction furnaces in China placed a significant requirement on Electric Arc Furnaces (EAFs), which rely heavily on scrap. As a result, the utilization of steel scrap in steelmaking in China increased sharply from 11% in 2016 to 20% in 2018.

The COVID-19 pandemic in 2020 caused a supply chain disruption, which resulted in a significant decline in metal production. Furthermore, there was a large contraction in demand owing to the slowdown of prominent end-use industries, such as construction and automotive. This is likely to affect the recycling industry in 2020. However, a sharp rebound is expected in 2021 as manufacturing operations are allowed to continue from the latter half of 2020.

Steel led the market and accounted for more than 79.0% share of the global volume in 2019. The large-scale utilization of steel in the construction, automotive, and consumer goods industries is the major factor driving the segment growth.

Reutilization of copper saves 15% of the total energy used in extracting and manufacturing the same amount of virgin copper. The rising focus on energy conservation around the globe and increasing demand for copper from the electrical & electronics industry are likely to play a major role in driving the segment growth over the coming years. 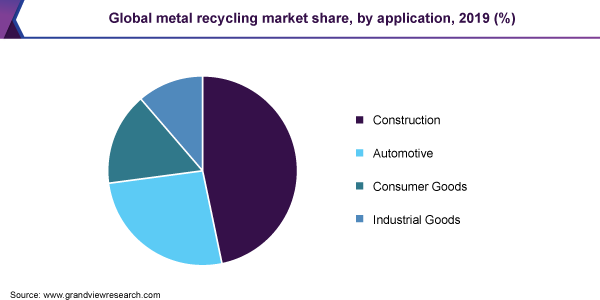 The automotive industry also uses a considerable amount of metal. For instance, engine components and various other auto components, such as hoods, mufflers, basic vehicle frames for doors, and fuel tanks, are made of steel. According to the World Steel Association, about 70% of an automobile’s weight consists of iron and steel. This represents a lucrative opportunity for industry growth.

The Asia Pacific led the market and accounted for more than a 67.0% share of the global revenue in 2019. This dominance can be attributed to the significant metal production in the region. In 2019, Asia Pacific produced 72% of steel and 66% of primary aluminum produced in the world. Therefore, the region has a well-established recycling industry.

In North America, roughly 42% of crude steel is produced using recycled materials. This illustrates the massive significance of recycling in the region. The country is a major producer of secondary aluminum. Further, the U.S. produces steel mainly using the EAF process which consumes a significant quantity of scraped material.

The global market is fragmented and unorganized. Growing environmental concerns, increasing demand for the product from end-use industries, and rising government regulations are expected to encourage manufacturers to source their raw materials from recycling at a higher rate. In June 2019, Tata Steel made an announcement of its plan to launch its first recycling plant in the state of Haryana, India. This strategic initiative is aimed at helping the company to gain an early mover advantage in the Indian market landscape. Some of the prominent players in the metal recycling market are:

This report forecasts revenue and volume growth at global, regional, and country levels and provides an analysis of the latest industry trends in each of the sub-segments from 2016 to 2027. For the purpose of this study, Grand View Research has segmented the global metal recycling market report on the basis of product, application, and region:

How big is the metal recycling market?

What is the metal recycling market growth?

Which region accounted for the largest metal recycling market share?

b. Steel dominated the metal recycling market and accounted for a volume share of 79.5% in 2019, owing to the abundant availability of steel scrap and its high recycling rate.

Who are the key players in the metal recycling market?

b. Some of the key players operating in the metal recycling market include CMC, European Metal Recycling, Novelis, Norsk Hydro ASA, and Tata Steel.

What are the factors driving the metal recycling market?

b. The key factors that are driving the metal recycling market include rising environmental awareness and increasing demand from metal from end-use industries such as automotive and construction.