The global methyl ethyl ketone market size was valued at USD 2.56 billion in 2015 and is expected to register a CAGR of 4.9% over the forecast period. Paints and coatings segment is the major consumer, where the product is widely used as a solvent. A positive demand outlook for adhesives, printing inks, paints, and coatings, on account of increasing construction spending, particularly in the Asia Pacific and Middle East regions, is expected to remain a key factor driving the global market.

Methyl ethyl ketone (MEK) is also used in pharmaceutical and personal care industries wherein the manufacturing of antiseptics, anesthetics, lotions, and drugs. Thus, the rapid growth of the pharmaceutical industry on account of increasing healthcare expenditure in Asian countries is expected to fuel the demand over the forecast period. 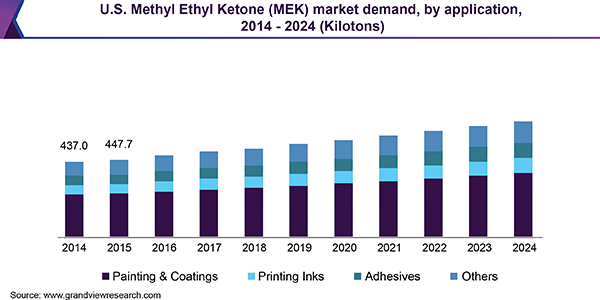 Regulatory bodies, particularly in developed economies, have imposed stringent regulations on MEK manufacturers with regard to the product’s toxicity levels. This is anticipated to restrain the market growth in the near future. Fluctuating prices of crude oil and its downstream derivatives can also directly impact market profitability, as most of the commonly used solvents including MEK are downstream derivatives of crude oil.

In the past few years, there was a drastic decline in crude prices, which negatively influenced the overall revenues. In addition, lower prices of crude oil resulted in increased inventories of the product with net inventory rising to 1.72 million barrels per day, as per the data published by the U.S. Energy Information Administration in 2016.

Paints & coatings emerged as the leading application segment and is expected to register a CAGR of 4.4% from 2016 to 2024. Increasing spending on construction activities with the rapid growth of the automobile industry in emerging markets of the Asia Pacific and the Middle East has resulted in high demand for paints & coatings. Paints & coatings include specialty, waterborne, powder, and solvent-borne coatings. The high demand for powder coatings in the automobile and electronics industries has significantly enhanced the product consumption in this application segment. Adhesives and printing ink segments are also expected to witness significant growth from 2016 to 2024.

Increasing printing inks demand from the packaging and publishing industry is expected to boost the MEK market in this segment. The product is widely used and is a preferred solvent in the printing industry owing to its characteristics, such as quick-drying and better adhesion with substrates like metals, plastics, and glass. Developments in end-user industries including pharmaceuticals, food processing, and cosmetics are expected to drive volumes in printing inks application over the next six years. MEK solvent-based inks used in these industries enable high-resolution printing. Other major applications for printing inks include newspapers, labels, commercial printings, and books.

The Asia Pacific led the global industry and accounted for over 55% of the global demand in 2015. The regional volumes are primarily driven by high demand from the printing inks sector in emerging countries including China, India, Indonesia, and Thailand. The region is expected to continue its dominance over the forecast period on account of the increasing demand for adhesives and printing inks from residential and commercial building constructions. 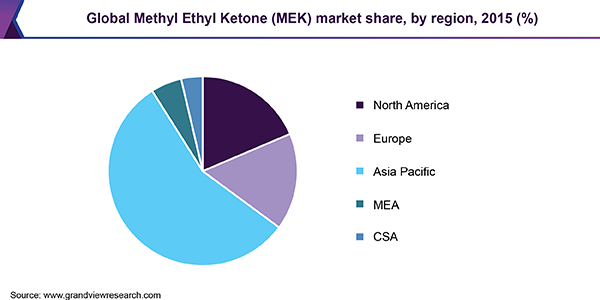 In addition, the rapid development of urban centers, especially in China and India, is likely to positively influence the adhesives industry in APAC, thereby driving the regional market. The market in Middle East & Africa is anticipated to witness a significant CAGR of 4.4% over the forecast period. The rapid growth of the construction industry in the Gulf countries including the UAE, Saudi Arabia, Qatar, and others is likely to boost the product demand over the estimated period. Moreover, industrialization in the region is also said to impel market growth.

The global is concentrated in nature and shows a high degree of integration across the value chain as manufacturers are either engaged in raw material production or consume the final product. This helps in achieving economies of scale and expanding their business to maximize profits. Major manufacturers include ExxonMobil, Maruzen Petrochemicals, Shell Chemicals, Arkema S.A, Sasol Solvents, and Petro China. Maruzen Petrochemicals installed a new distillation system called SUPERHIDIC in their manufacturing plant in Japan, to save around 40% of the energy consumption and produce the economic products.

Major manufacturers either distribute the final products through their own distribution channels or outsource them to independent suppliers. Some of the major suppliers in the value chain include Xilan Chemicals, Sigma-Aldrich, Sherwin-Williams, Wicks Aircraft Supply, and LP Chemicals. The market is price-sensitive; thus, product differentiation is anticipated to be the key business strategy to negate the competition and gain a competitive advantage.