The global microbiology & bacterial culture for industrial (food, water, bioenergy) testing market size was estimated at USD 3.38 billion in 2016. Significant worldwide rise in burden of food-borne illnesses has served as a driving force for the plethora of microbiology researches carried out in recent times.

Ongoing development in microbiology due to advancements in biotechnological research, which are aimed at investigating the role of microbes in disease pathogenesis, is one of the crucial factors impelling the growth. Moreover, growing usage of bacterial cell culture in animal feed testing to prevent microbial contamination is expected to have a positive impact on the industry progress.

Field of microbiology research has many key aspects that ensure population safety and product quality. Pure bacterium culture is recognized as an essential tool for investigating virulence factors, antibiotic susceptibility, and genome sequence of microbes to understand their role in infection and food-borne diseases.

Researchers are continually investing in developing novel consumables and working towards optimizing existing products for enhanced productivity and yield. Recently, in 2016, an alternative media was formulated for bacterial and fungal growth at University of Jaffna.

In June 2016, a culture medium was developed for isolation of Flavobacterium and Chryseobacterium from rhizosphere soil. Introduction of single-use disposable equipment to carry out microbial experiments has driven the development and sales of microbial media and related reagents, thereby aiding in revenue generation.

Escalating cases of animal feed recalling as a consequence of contamination mainly due to suspected Salmonella contamination has fomented several biologists and scientists to conduct research activities for microbiological assessment of animal feeds. Also, organizations such as Veterinary Laboratory Investigation and Response Network (Vet-LIRN) work in collaboration with various existing microbiology organizations. They are involved in conducting studies to evaluate presence of selective microorganisms in various pet feeds.

Thus, presence of organizations conducting studies associated with veterinary health are attributive for rise in adoption of culture media and reagents, thereby contributing to segment growth. Research and studies have developed methods for testing and detoxification of animal feed contaminated with various toxins.

Out of all the consumables offered by this market, media accounted for the largest share. This can be attributed to the high requirement for media due to the composition of cell culture. Growing bacterial cell cultivation is expected to have direct positive impact on the adoption of media, consequently driving the segment growth.

Easy availability, relatively less expensive cultivation, and fast growth rate are some of the advantages that have attributed to the accelerated adoption of this product. E.coli is recognized as one the widely used bacteria-based cell culture in number of microbial projects.

Food and water are the easiest and most common means of transfer of pathogens. Concerns for food safety have witnessed a rise owing to the rising incidence of food poisoning over the years. Maintaining microbial quality control at global supply chains is expected to raise demand for these products to test presence of pathogens.

Thus, rising number of eatables manufacturing processing entities is expected to contribute to lucrative growth of the market. Moreover, rising demand of consumables with increasing advent of experimentation in technology for water testing is expected to drive the segment over the forecast period. Initiatives taken up by the government are supportive for the projected growth rate. 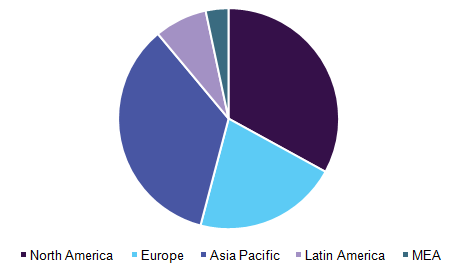 Comparatively, larger share of the U.S. has led to higher revenue generation in North America with bacterial media leading in revenue followed by yeast and fungal cell cultures. The U.S. market is expected to grow at a steady pace due to an availability of advanced technology.

Other factors that are projected to bolster progress are increasing investments by multinational companies and extensive requirement of better food supplements & agricultural innovation.

North America is followed by Asia Pacific and is anticipated to exhibit the fastest growth through to 2025.

In March 2017, Merck announced launch of Milli-Q IQ 7000 system, an advanced technique for water purification. Such initiatives by the companies are expected to drive the microbiology culture market and prove its lucrative nature.

This report forecasts revenue growth at regional & country level and provides an analysis on the latest trends and opportunities in each of the sub-segments from 2014 to 2025. For the purpose of this report, Grand View Research has segmented the microbiology & bacterial culture for industrial testing market on the basis of consumables, applications, and regions: