The global biofuels market size was valued at USD 135.7 billion in 2019 is expected to grow at a compound annual growth rate (CAGR) of of 6.9% over the forecast period. Biofuels are the types of fuels that are derived from plants, animal waste, or algae material. They are considered as a renewable fuel as feedstock material utilized can be replenished at a faster rate as compared to conventional fossil fuels. 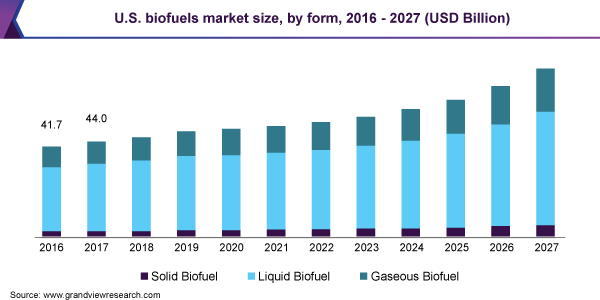 Limited availability of fossil fuel-based resources and growing awareness regarding curbing carbon emissions are some of the factors that are likely to drive the market. Also, the presence of various supporting regulatory policies and tax incentives across the world on the utilization of biofuels is anticipated to enhance their demand majorly in the transportation sector.

The U.S. has been one of the leading countries in the development and utilization of biofuels on a global level. Bioethanol is one of the majorly produced and utilized biofuel in the country which is majorly made from corn grain and is abundantly available in U.S. Bioethanol is blended with gasoline and sold in variants of E10 and E85 in the U.S., which has majorly driven the adoption of biofuels in the country.

The U.S. government has also been playing a major role to promote production and utilization of biofuels across the country. For instance, The Energy Independence and Security Act (EISA) of 2007 states to implement biofuel blending mandates in the U.S. for transportation fuels. Under this, it has kept a target that transportation fuels should contain a minimum volume of 36.0 billion gallons as biofuels in the form of blending by 2022. Further, presence of favorable policies and tax incentives in the U.S. is expected to drive the market in the forecast period.

Biofuels are being considered as one of the emerging cleaner fuel options over conventional fossil fuels in the future. Further, the availability of funds for research and development for the development of biofuels at a lower cost will enhance their adoption. In addition, ongoing research for commercialization of second and third-generation biofuels will further boost the growth of the market during the forecast period.

However, biofuels are manufactured from sources such as corn, sugarcane, soybeans, and oil palms which are basically food crops. Further, large scale utilization of these crops to generate biofuels can create a scarcity of food products made from these crops. It can affect the prices of food and also pose questions regarding food security. This will hinder the growth of the market in the forecast period in some regions or countries around the world. 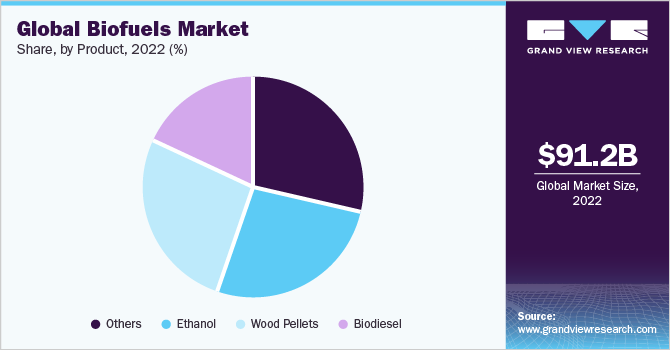 The solid biofuel form segment emerged as the fastest-growing segment with a revenue-based CAGR 8.5% in the biofuels market during the forecast period. The growth is attributed to rise in adoption and deployment of biomass power for electricity generation. In addition, solid biofuels are also emerging as a green alternative for space heating in residential and commercial buildings as compared to available conventional fossil fuels.

The gaseous biofuel form segment was the second-largest segment of the market in 2019 owing to rise in adoption of gaseous biofuels in applications such as transportation fuel and electricity generation. Further, the gaseous form is being utilized for cooking as it is a greener substitute over liquid petroleum gas.

North America held the largest market share of 38.6%, in terms of revenue, in 2019 owing to the presence of large amount of feedstock for biofuel production. Presence of supporting infrastructure for the production and favorable government policies for the utilization of these fuels in the region will result in growth of the market in the region.

Major growth is likely to be driven by Brazil, the U.S., China, and the European Union. However, other countries have been projected to grow significantly in the industry i.e., India, Thailand, Netherlands, Canada, and Indonesia on account of a rise in awareness to curb carbon emissions and to enhance the utilization of the fuels.

Further, Canadian Clean Fuels Standard (CFS) is anticipated to apply various norms for gaseous, liquid, and solid biofuels that are combusted for energy production in the transportation sector. The government of Canada has been concentrating on annual decreases by 30 Mt in GHG emissions by 2030 that contributes in the country’s efforts to accomplish an overall 30.0% reduction in GHG emissions by 2030.

In Asia Pacific, the market is expected to witness the highest volume-based CAGR of 6.4% in the forecast period as compared to other regions. Introduction and rise in the adoption of biofuel supporting policies and regulations in countries such as China, Indonesia, Australia, and India are expected to boost the demand for biofuels majorly in the transportation sector in form blending with conventional fossil fuels.

Companies are concentrating further on long-term values under which some of the top market players across the region have implemented supportable sourcing strategies on the assessment of the long-term contracts. The major players in the market are also maintaining a robust and low-risk strategy to gain market share.

The companies have started escalating their business through various mergers and acquisitions in order to accommodate the rising demand. For instance, ADM; Valero Energy Corporation; Green Plains; Butamax; Pacific Ethanol Inc.; and Renewable Energy Group, Inc. (REG) have acquired various companies across the globe to maintain their dominance in the market. Some of the prominent players in the biofuels market include:

This report forecasts revenue growth at global, regional, and country levels and provides an analysis of the latest industry trends in each of the sub-segments from 2016 to 2027. For the purpose of this report, Grand View Research has segmented the global biofuels market report on the basis of form and region: