The global microbiome therapeutics market size was valued at USD 11.3 million in 2015. Increasing prevalence of diseases due to dysbiosis of microbiota in the gut and provisioning of a high amount of funding for biological drug development studies are the key drivers affirming growth of this market.

Gut microbiome has been known to be associated with the good health of a person. Researchers have reported that alteration in a number of microorganisms such as firmicute, bacteroidetes, and actinobacteria leads to the development of gastrointestinal disorders, diabetes, arthritis, and other neurological disorders. Heavy and long-term use of antibiotics, unhealthy lifestyle, and increasing age are some of the factors reducing the number of beneficial microorganisms in the human body. 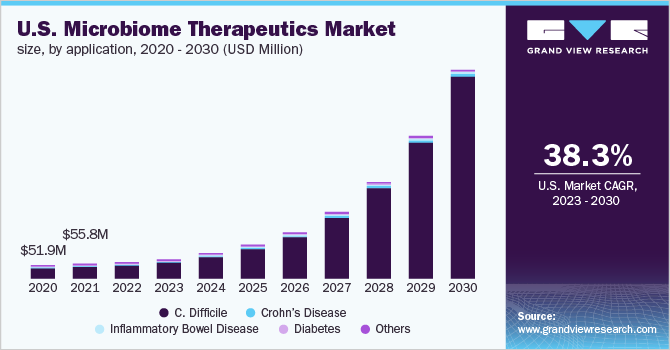 Low level of beneficial microbiota helps the growth of fatal infectious diseases and organisms, such as Clostridium difficile (C. difficile) and ulcerative colitis. C. difficile has been reported to affect over half a million people in a single year and has a high recurrence rate. People on antibiotic treatment are 7 to 10 times more likely to get affected by C. difficile infection during the treatment and the months following it.

Increasing collaboration between pharmaceutical companies for development of novel drugs is also a high impact rendering factor for growth. For instance, Seres Therapeutics, U.S., and Nestlé Health Science have entered into a collaborative agreement for development and commercialization of extensive product pipeline for ulcerative colitis and C. difficile infection.

On the basis of type, therapeutics are segmented into Fecal Microbial Therapy (FMT) and microbiome drugs. FMT has been reported to be used off label by physicians since the early 90s, until it received biological therapy Investigational New Drug (IND) approval recently for its usage in the treatment of C. difficile patients.

FMT dominated the market in 2015 with a substantial share. It is the only therapeutic option available in the market, which affirms the dominance of this segment. Moreover, increasing research activities undertaken by research institutes for finding more therapeutic applications of FMT and introduction of FMT capsules are expected to accentuate growth.

Drugs are anticipated to witness highly lucrative growth over the forecast period due to factors like presence of strong product pipeline with more than 27% drugs in phase 2. Key players are expecting high revenue generation from lead drugs, such as NM504, EB 8018, SER-109, and SGM- 1019.

Microbiome therapeutics find wide applications in various fields, some of which are C. difficile infections, Crohn’s disease, Inflammatory Bowel Disease (IBD), and diabetes. Amongst all, C. difficile held the largest market share of over 40.0% in 2015, which can be solely due to the approval of FMT for use in the treatment of C. difficile under IND approval. 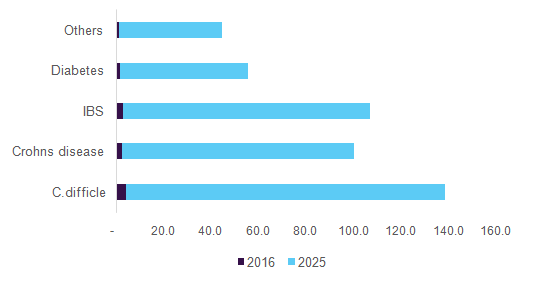 On the other hand, Crohn’s disease is expected to be the fastest growing application for microbiome therapeutics. More than 20% of drug pipeline consists of therapies for the treatment of Crohn’s disease. Other applications, such as treatment of lactose intolerance, are estimated to witness potential growth over the forecast period with the commercialization of drugs such as RP-G28 after 2019.

North America dominated the regional market with revenue generation of over USD 5.0 million in 2015. Highly established research facility for the development of novel therapeutics, presence of health conscious population, and rising healthcare expenditure are the major factors for dominance of the region. Moreover, local presence of key players, such as OpenBiome, in this region will help in maintaining this dominance over the forecast period.

North America is closely followed by Europe with a difference of merely 9.0% in the market share. However, Asia Pacific is estimated to witness growth with a CAGR of over 49% due to factors such as increasing economic stability, high amount of biological research initiatives in national institutes, and growing awareness among physicians regarding novel therapeutics.

Some of the major companies are MicroBiome Therapeutics LLC; Seres Therapeutics; Enterome Bioscience; MaaT Pharma; Rebiotix, Inc.; Ritter Pharmaceuticals; Second Genome; and OpenBiome. Key players are receiving heavy funding from other companies to support the development of microbiome therapeutics pipeline. For instance, Seventure Partners, a venture capital firm, has recently announced to have invested more than USD 160 million for research in this segment.

Companies are undertaking strategic initiatives such as new product development and venture capital investments for catering to greater opportunities in both developed and developing countries. Key players are also investigating drug molecules with more than one application for gaining wider market share. RP-G28 by Ritter Pharmaceuticals, which is currently in clinical trials for lactose intolerance, is also being investigated for future indications such as Crohn’s disease, ulcerative colitis, and irritable bowel syndrome.

This report forecasts revenue growth at global, regional & country levels and provides an analysis of the latest trends and opportunities in each of the sub-segments from 2014 to 2025. For the purpose of this study, Grand View Research has segmented the microbiome therapeutics market on the basis of type, application, and region: