The global microdisplays market size was valued at USD 888.3 million in 2017. It is projected to expand at a CAGR of 19.1% from 2018 to 2025. A microdisplay can be defined as a screen with a diagonal size of fewer than two inches. Microdisplays are being increasingly incorporated in consumer electronic devices, such as smartwatches, head-mounted displays (HMDs), smartphones, smart glasses, and viewfinders of digital cameras.

They provide a super extended graphics array (SEGA) resolution that offers an improved viewing angle and enhanced brightness for better user experience. They are being used across numerous sectors, such as military & defense, consumer electronics, medical, and manufacturing. Additionally, increasing demand for nanotechnology devices to detect micro-sized elements is anticipated to spur the growth of the market during the forecast period. 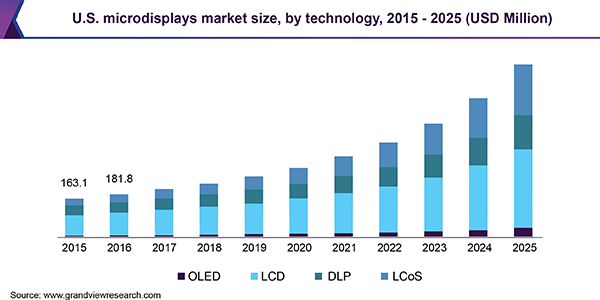 Strong demand for microdisplays in Near-To-Eye (NTE) applications along with surging use of these devices in HMDs and HUDs (Head-Up Displays) for military, medical, and automotive applications is estimated to drive the market during the forecast period.

The medical industry is a promising end-user segment for market players owing to the rising implementation of microdisplays in diagnostic equipment, including CT scanners, ECG machines, medical imaging machines, and other devices. Organic Light-Emitting Diode (OLED) microdisplays are widely used in monochrome night-vision systems for military applications, including thermal imaging, situational awareness, and training of soldiers.

The growing popularity of smartwatches and fitness trackers among consumers for various applications, such as health monitoring, lifestyle support, entertainment, and fitness monitoring, is expected to fuel the demand for microdisplays during the forecast period. The emergence of microdisplay-based holographic displays is also likely to stimulate the growth of the market during the forecast period.

Moreover, Virtual Reality (VR) headsets compatible with smartphones and other devices are being increasingly adopted by youngsters for an enhanced gaming experience. Smartphone manufacturers such as Samsung and HTC also offer VR headsets on the purchase of new smartphones. This trend is poised to further propel the market.

However, high manufacturing and R&D costs associated with microdisplays are projected to inhibit the growth of the market. Nevertheless, manufacturers are implementing low-cost technologies to reduce the overall costs.

The LCD segment accounted for just over 55.0% of the overall market revenue in 2017. The segment is anticipated to dominate the market through 2025. The growth of the segment can be attributed to the extensive use of LCD microdisplays in HUDs, HMDs, and Electronic Viewfinders (EVFs). Moreover, the Liquid Crystal on Silicon (LCoS) segment is estimated to exhibit noteworthy growth during the forecast period owing to its compact size and enhanced efficiency.

Furthermore, key market players are highly focused on incorporating new OLED microdisplay technology to provide displays with better visual performance to customers. Besides, there is a heightened demand for OLED microdisplays for VR headset displays owing to their higher power efficiency, faster response times, enhanced resolutions, and lower costs. Rising awareness regarding the advantages of this technology type is expected to bode well for the overall market.

The NTE segment dominated the market in 2017, with a share of approximately 48.0%. Spiraling demand for AR glasses in industrial applications supporting warehouse management, on-the-job training to field workers, and maintenance and inspection activities, among others has been contributing to the growth of the segment. Besides, increasing use of HUDs in premium vehicles is also likely to escalate the growth of the segment.

Growing adoption of VR headsets for gaming and entertainment purposes is poised to open growth opportunities for the microdisplays market. Moreover, growing demand for DLP (Digital Light Processing) projectors in various sectors such as education and corporate training is anticipated to supplement the growth of the projection segment.

In 2017, the military and defense sector accounted for over 39.0% of overall market revenue. The growth of the segment can be attributed to high demand for low-power OLED microdisplays for several applications, such as thermal imaging, situational awareness, simulation, and training. Prominent manufacturers such as Kopin Corporation and eMagin, Corporation are offering various microdisplay-related products such as night-vision goggles and thermal weapon sights for military applications, which deliver an enhanced visual experience. 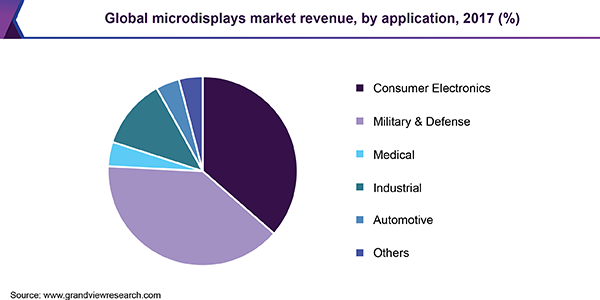 The consumer electronics segment is projected to witness the highest growth during the forecast period, owing to the surging adoption of smartphones, smartwatches, and smart glasses. Besides, the rising adoption of VR gaming headsets coupled with shifting consumer preferences toward miniaturization of electronic devices to make them handy and portable is estimated to stoke the growth of the segment during the forecast period.

North America commanded more than 35.0% of the overall revenue in 2017. Increasing use of ICT technologies in the educational sector is transforming traditional classroom teaching, which in turn is driving the regional market. High military expenditure by the U.S. government (approximately 4.0% of the total GDP) is leading to increased spending on microdisplay applications, such as night vision HUDs and thermal imaging.

This report forecasts revenue growth at the global, regional, and country levels and provides an analysis of the industry trends in each of the sub-segments from 2015 to 2025. For the purpose of this study, Grand View Research has segmented the global microdisplays market report on the basis of technology, projection, application, and region: