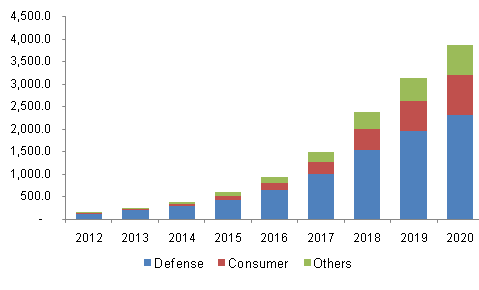 The advent of lightweight wearable technology has led to growing innovation in the head mounted display (HMD) industry. With the introduction of lightweight displays, manufacturers across the globe have started positioning HMD as a consumer product. Virtual prototyping provides a significant opportunity to purveyors, where users can be involved in virtual car designing by evaluating accurate positions of different components and communicating customization to designers.

The market is in the early stage of evolution. Lack of awareness about the diverse applications in stereoscopic imaging used for medical applications, especially in the developing nations has been restricting industry growth for a few years. In addition, lack of awareness based on the potential hazards due to obstructive line of sight, resulting in large wearable displays is hampering industry growth for defense-based applications.

Lack of standardization in components such as orientation sensors is hampering industry growth. Standardized evaluation processes need to be developed for complete systems as well as individual components. Simulator sickness associated with general discomfort, eyestrain, perceptual constancy, dark focus, and effect of darkness needs to be addressed in order to enhance the market.

Rapidly mounting HMD demand in consumer electronics is expected to drive the industry over the next six years. Additionally, the need for a shorter testing period in virtual prototyping has resulted in price degradation, which is estimated to further enhance industry growth. Besides consumer applications, growing demand for these displays for security, tracking, and imaging is a key driver contributing to the overall industrial growth.

There is a growing need for lightweight and flexible wearable displays in the industrial ecosystem owing to the lack of standardization. The development of advanced technical developments for stereoscopic imaging could benefit surgical training or utilization in remote medicine applications. HMDs are integrated into many consumer electronics devices, which are expected to augment market growth.

Growing industrial opportunities for HMDs are mainly concentrated in the defense sector. Advanced military HMDs for ground-based applications (simulator, combat vehicle, and soldier applications) and airborne (rotary and fixed-wing) are manufactured by industry participants to optimize and improve their usage. However, growth prospects for new industry entrants are very low on the account of industry saturation. Other end-use industries such as safety, sports, medical, and automation are expected to grow at a relatively slower rate over the forecast period.

The development of innovative technologies along with growing awareness regarding diverse applications has led to the development of inter-pupillary distance for stereoscopic imaging, which employs HMD for functionality. This trend is expected to continue over the forecast period, driving the global market.

North America HMD market contributed to over 35% of the global revenue in 2013 and is expected to maintain a steady growth rate throughout the forecast period, with the majority of the overall demand originating from medical, defense, and safety services. The head mounted display industry in Europe is expected to be boosted by considerable innovation in display technologies. Asia Pacific HMD market is expected to emerge as a lucrative region, owing to low production costs, low maintenance costs, and availability of cheap labor with adequate expertise in the field.

Global head-mounted display market share is moderately concentrated in nature and is characterized by a high degree of competition among the leading players, who adhere to significant M&A activities to gain a strong foothold in the industry by the expansion of business operations and enhancement of production capabilities.

How big is the head mounted display market?

b. The global head mounted display market size was estimated at USD 9.4 billion in 2019 and is expected to reach USD 11.8 billion in 2020

What is the head mounted display market growth?

b. North America dominated the head mounted display market with a share of 33.2% in 2019. This is attributable to the majority of the overall demand originating from the medical, defense, and safety services industry.

Who are the key players in head mounted display market?

What are the factors driving the head mounted display market?

b. Key factors that are driving the market growth include reduced microdisplay pricing coupled with high demand for helmet-mounted displays across the application area and the growing demand for mobile-based AR applications for 3D scene assembly.