The global microfluidics prototype market size was valued at USD 425.7 million in 2017 and is anticipated to expand at a CAGR of 20.54% over the forecast period. It is majorly driven by research, development tools, and viable commercial technologies. Introduction of advanced technologies, increasing demand for low volume sample analysis, and the emergence of 3D printing technology are expected to drive the market. 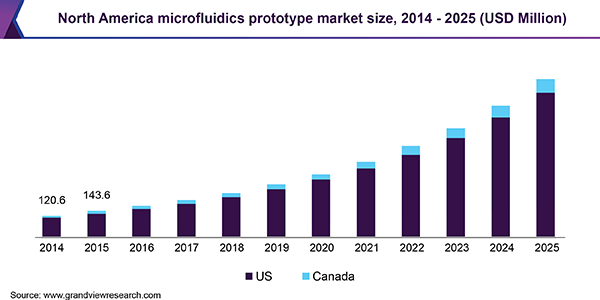 For instance, in July 2018, researchers from Paracelsus the Medical University and McMaster University developed ‘artificial placenta’, a microfluidic device consisting of microchannels that interchange oxygen between blood and external air in newborns and is connected to the umbilical cord. The researchers designed a double-sided single oxygenator unit to develop a prototype with a gas exchange membrane along with a microchannel network layered with stainless steel reinforced Polydimethylsiloxane (PDMS) polymer.

The microfluidics field is majorly dominated by startups along with a few multinationals. Research groups from various universities play a major role in the technological exploration and have established spin-offs to form their own startup companies. For instance, in March 2018, researchers from the National University of Singapore (NUS) developed a microfluidic chip that can detect nano-bioparticles without the use of fluorescent labels providing disease diagnosis and quantification of viruses, proteins, DNA, and extracellular vesicles (exosomes) at low cost.

North America led the microfluidics prototype market in 2017 with the U.S. holding the highest market share. This dominance can be attributed to high research capital, the introduction of improved sample volume screening techniques, and availability of high funding. More than 170 prototyping providers are based in the U.S. whereas, in Europe there are around 90 companies. In July 2016, New Jersey Institute of Technology received a research grant of USD 1 million from the W.M. Keck Foundation to develop a microfluidic device. The 3-year project was to develop new fabrication materials such as topological phononic crystals, which have wide a range of applications.

The Europe market for microfluidics prototyping is expected to exhibit a rapid CAGR over the forecast period and U.K plays a key role due to the increasing technological innovations. For instance, in March 2016, Dolomite developed the first-ever 3D printer for microfluidic devices called Fluidic Factory. The device is anticipated to help perform rapid prototyping of fluidically-sealed devices at low cost. 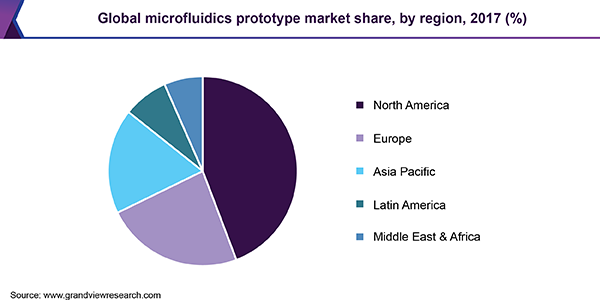 Asia Pacific (APAC) is the fastest growing market owing to the developing economy, advancing research infrastructure, and availability of low-cost labor. International players are trying to penetrate untapped markets by introducing their products in APAC.In February 2016, Samsung Electronics introduced a wearable lab-on-chip device as a data monitoring and processing device for laboratory test biomarkers. The bioprocessor chip is an integrated device that performs all-in-one tests.

Microfluidics in Latin America is still in an emerging phase and thus has huge potential. In July 2011, the first microfluidics lab was set in Chile. The research was supported by the Science for Life Foundation, which provided the platform for the research. Low-cost substrates and microfabrication are some of the enabling features of microfluidics in Latin America. In a study published in July 2016 in Brazil, rapid and low-cost fabrication of PDMS electrophoresis microchips was performed using Polyvinyl Acetate (PVAc) emulsion. The resulting fabrication method offered reproducibility for prototyping of microchips with the potential to be implemented in any laboratory condition.

microLIQUID; thinXXS Microtechnology; Dolomite; Potomac; uFluidix; Alvéole; Micronics, Inc.; and ALine, Inc. are some of the key market contributors. uFluidix manufactures and provides prototyping services of microfluidics devices and provides grants for innovative technologies and startups in the early prototype development stage. It has incorporated a community termed as the Microfluidic Circle, which encourages innovations and technological advancements in the field. In May 2018, the company granted USD 50,000 worth of design and fabrication services to uFraction8 Ltd., a manufacturer of microfluidic-based filtration systems, as a winning prize in the annual Microfluidic Circle competition.

Some manufacturers are forming alliances to deliver higher quality solutions to clients. For instance, in July 2017, Aline, Inc. announced a strategic partnership with Triple Ring Technologies (TRT) to provide diagnostic solutions in cases where microfluidic consumables are supported with instrument automation.

This report forecasts revenue growth at global, regional, and country levels, and provides an analysis of the latest industry trends in each of the sub-segments from 2014 to 2025. For the purpose of this study, Grand View Research has segmented the global microfluidics prototype market report on the basis of region:

How big is the microfluidics prototype market?

b. The global microfluidics prototype market size was estimated at USD 0.6 billion in 2019 and is expected to reach USD 0.7 billion in 2020.

What is the microfluidics prototype market growth?

Which segment accounted for the largest microfluidics prototype market share?

b. North America dominated the microfluidics prototype market with a share of 47.6% in 2019. This is attributable to high research capital, the introduction of improved sample volume screening techniques, and the availability of high funding.

Who are the key players in microfluidics prototype market?

What are the factors driving the microfluidics prototype market?

b. Key factors that are driving the market growth include the emergence of 3D printing technology, increasing demand for low volume sample analysis, and the introduction of advanced technologies.