The global migraine drugs market size was valued at USD 1.7 billion in 2017 and is expected to exhibit a CAGR of 18.0% during the forecast period. Increased uptake of novel drug classes, the launch of Calcitonin gene-related peptide (CGRP)-based therapies, and high unmet needs are some of the key factors driving the market growth.

Migraine is a common neurological disease characterized by recurrent attacks of severe throbbing head pain. Often unilateral, the headaches can last from four hours to three days. Pain is often associated with other symptoms such as nausea, vomiting, increased sensitivity to light (photophobia), increased sensitivity to sound (phonophobia), tingling or numbness in the extremities or legs, sweating, and diarrhea. Migraines are more frequent in women, with 17.0% women reporting an attack compared to 6.0% men, every year. 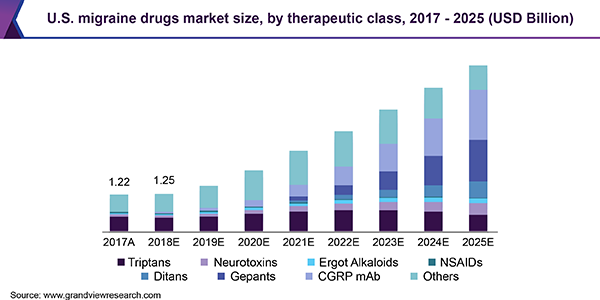 Majority of the drugs currently available are approved for the acute form of the condition, led by generic triptans as the first-line treatment. The market is witnessing a shift in terms of strong R&D with the introduction of CGRP-based therapies and uptake of novel drug classes such as ditans, gepants, and reformulation of triptans for both chronic and episodic migraine.

The market can be segmented by treatment into acute/abortive treatment and preventive/ prophylactic treatment. Acute treatment includes therapeutic classes such as triptans, ergot alkaloids, NSAIDs, and other non-specific drugs prescribed over-the-counter (OTC) such as aspirin, acetaminophen, and ibuprofen. The therapeutic classes are diversified through the route of administration with drugs available as oral, injectables, nasal spray, and others.

Preventive/prophylactic treatment includes prescription of off-label and generic medications including beta-blockers such as atenolol and propranolol, anti-epileptics such as topiramate, and divalproex sodium. Currently, Allergan’s Botox (neurotoxin), Amgen/ Novartis’s Aimovig, and Teva’s Ajovy (CGRP mAb) are the only drugs approved for migraine prevention. However, Botox requires more than 30 injections across the forehead, shoulders, and neck and does not provide relief from episodic migraine.

Current research focuses on using novel mechanisms of action such as CGRP-based receptor and ligand inhibition, corticotrophin receptor antagonism, and nitrous oxide inhibition. Approval of CGRP monoclonal antibodies is one of the key developments in the preventive market. Though several companies are expected to enter this sphere in the next two years, Amgen and Novartis are poised to benefit from Aimovig’s first-mover status, favorable reimbursement scenario, and easy to use the pen-device mode of administration. The drug was launched in North America in May 2018 and in Europe in July 2018 and has witnessed a positive response from patients and healthcare providers alike. In September 2018, Teva’s Ajovy (fremanezumab) became the second CGRP therapy to be approved by the FDA for migraine prevention. Ajovy is the first and only CGRP monoclonal antibody that provides patients quarterly (675 mg) and monthly (225 mg) dosing options. Eli Lilly’s Emgality (galcanezumab) is also anticipated to receive FDA approval by October 2018.

Currently, there are three novel drugs in the late-stage pipeline that are set to change the treatment landscape. These drugs follow disease-modifying approaches and are associated with superior clinical efficacy and a favorable safety profile compared to currently marketed drugs.

Allergan’s ubrogepant and Eli Lilly’s Lasmiditan are expected to be first-in-class migraine drugs with a novel mechanism of actions for patients unresponsive to triptans or those who are at risk of cardiovascular disorders. Several triptans under late-stage development consist of reformulation of generic triptans, with an aim to improve the efficacy of existing formulations. Zosano Pharma’s M207 is being investigated in the Phase III ADAM (NCT03282227) trial. The drug is a novel formulation of zolmitriptan delivered via Zosano’s proprietary Adhesive Dermally-Applied Microarray (ADAM) technology.

Migraine is the third most prevalent and the sixth most disabling illness in the world, affecting more than 37 million in the U.S. and over one billion people worldwide. The U.S. dominated the market with more than 65% share in 2017 and is projected to maintain its position until 2025. Launch of CGRP based therapies, high prevalence, increasing adoption of novel therapeutics, and a large target population in the U.S. are some of the factors contributing to the dominance of the country. 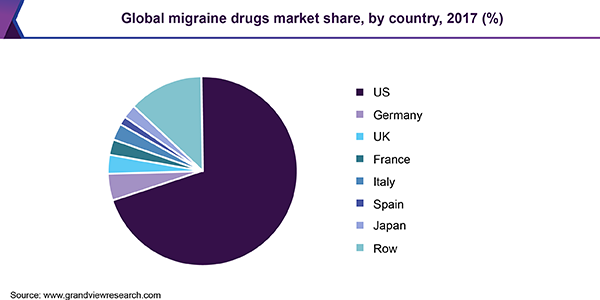 Emerging markets in the Asia Pacific are driven by increasing expenditure on healthcare, a large underserved patient population, low-cost production of drugs, and growing disease awareness.

Some of the key players in the market are Pfizer, GlaxoSmithKline, Allergan, Amgen, Eli Lilly, Teva Pharma, Biohaven Pharma, Johnson & Johnson, and Valeant Pharma. Until 2017, Allergan’s Botox, a neurotoxin was in a strong competitive position in the preventive migraine market. As the only drug approved for prevention, Botox commanded premium pricing with more than 60.0% market share in 2017. However, Botox is expected to face competition from the launch of Amgen/Novartis’ Aimovig and other highly efficacious CGRP-based therapies, which target both chronic and episodic migraine, as opposed to Botox, which is only approved for the chronic variant of the condition.

Aimovig’s launch at a lower than expected price will facilitate patient access and help drive drug sales in preventive migraine space, which is expected to be crowded and competitive with entry of CGRP mAbs from Teva Pharma, Eli Lilly and Alder.

CGRP small molecule antagonists (gepants) also represent a promising strategy for the treatment of acute migraine. Orally administered small molecules tend to be cheaper than biologics and thus could represent a preferred option for both patients and physicians. AOBiome Therapeutics is developing a novel antibacterial agent AOB-203 for the prevention of migraine. The product is an ammonia oxidizing bacteria AOB that produces nitric oxide to regulate inflammation and vasodilation associated with migraine.

This report forecasts revenue growth at global, regional, and country levels and provides an analysis of the latest industry trends in each of the sub-segments from 2017 to 2025. For this study, Grand View Research has segmented the global migraine drugs market report based on treatment, therapeutic class, route of administration, and country: