The global mineral supplements market size was valued at USD 10.26 billion in 2018 and is anticipated to expand at a CAGR of 5.1% over the forecast period. Rising prevalence of mineral deficiencies, especially calcium, zinc, and iron, and growing awareness regarding health and fitness are the key factors propelling the growth of this market. High prevalence of diseases, such as osteoporosis, anemia, cancer, and diabetes, is also fueling the market growth as these supplements are commonly used in the management of these conditions.

According to a research article published in NCBI in 2017, more than 200 million people were suffering from osteoporosis across the globe. According to the International Diabetes Federation, over 12.5 million cases of diabetes were reported in Brazil in 2017. Moreover, increasing consumer willingness to spend more on mineral supplement products also contributes to market growth. According to a consumer survey published in Forbes in 2015, over 30% of the global population was willing to pay more for functional foods fortified with calcium. 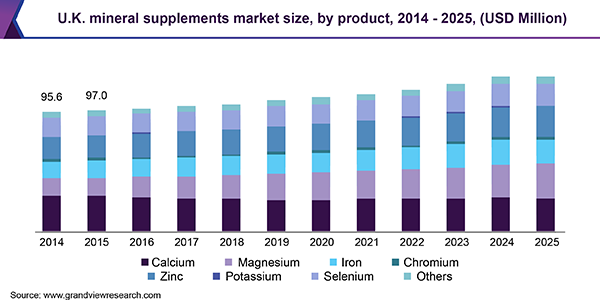 Also, a rise in the number of distribution channels further boosts market development. The recent trend of veganism also propels the demand for these nutrients, especially calcium and iron, as these are emerging as substitutes for vegans to meet their required intakes of essential minerals. According to a 2015 report published in La Repubblica, a leading newspaper in Italy, vegans, and vegetarians are increasing by 10% to 15% annually. Also, the growing geriatric population and rise in disposable income are some of the significant factors expected to boost market growth in the coming years.

Growing consumer preference for preventive healthcare is also one of the key factors augmenting the product demand. Besides, new product launches are expected to fuel the demand for mineral supplements over the forecast period. For instance, in April 2018, Mineral Bioscience (MBS) launched IoniCell for women, which has a fulvic ionic mineral that contains 65 to 72 essential macro and trace minerals. It protects against cellular damage, enhances nutrient absorption, and acts as a powerful antioxidant.

The calcium segment held the largest mineral supplements market share of approximately 30% in 2018. The growing prevalence of osteoporosis is one of the significant factors that boost the segment growth. According to the International Osteoporosis Foundation, over 5.3 million people in Germany suffered from osteoporosis in 2015. Also, the easy availability of calcium supplements contributes to segment growth. Increasing cases of cancer, particularly breast cancer, pose a high risk of developing osteoporosis at an early stage. For instance, research conducted by the NIH supported Women’s Health Initiative Observational Study (WHI-OS), reported an increase in fracture risk among breast cancer survivors. 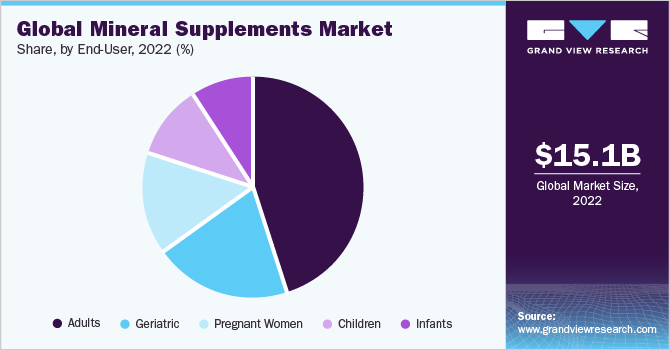 Besides, a growing number of new product launches and recent innovations also contribute to its increased market share. For instance, in December 2018, Nanova Tech, Inc. launched next-generation Nano-Cal supplements on its e-commerce website. A magnesium supplement is expected to witness a lucrative CAGR of 7.1% over the forecast period. This is attributed to its application in multiple health conditions including hypertension, migraine, bone health, and others. Companies are focused on making magnesium ingredients suitable for a variety of formulations. AIDP’s magnesium ingredient, Magtein, can be formulated for use in beverages, gummies, and others, which in turn boost its demand.

In 2018, Asia Pacific led the global market. Key factors contributing to the high demand include the presence of a large number of companies and emerging contract manufacturing hubs, like China, India, and the Philippines. Growing consumer interest towards preventive healthcare, presence of target consumer base, and rising health consciousness will drive the market further.

A recent survey showed that consumption of mineral supplements in China increased from 36% to 40% in the heavy user category between 2014 and 2016. Also, growing disposable income in emerging Asian countries, such as India, Indonesia, and Thailand, is expected to boost the product demand over the forecast period. For instance, India’s per capita income and discretionary spending are expected to increase to 10.2% and 45.0% respectively by 2025.

Middle East & Africa is expected to emerge with the fastest CAGR of 6.0% over the forecast period. The rising number of manufacturers and initiatives for increasing the awareness about products boosts the market growth. For instance, in 2018, iNova pharmaceuticals launched the Big O campaign to raise awareness about osteoporosis and the role of calcium for bone health. The company offers B-Cal calcium range, which is one of the leading brands of calcium supplements in South Africa.

Key companies in the market include Abbott; Nestle SA; Amway; Herbalife International of America, Inc.; and Glanbia plc. The market is fragmented in nature comprising of a large number of both small- and large-scale firms. Increasing investments in R&D, mergers & acquisitions, collaborations with other companies, new product launches, geographic expansions, and product & flavor differentiation are the key strategies adopted by these companies for gaining a competitive edge. For instance, in 2019 Unilever announced the acquisition of OLLY Nutrition, a provider of vitamin, mineral, and supplements category. Lupin, a major pharmaceutical company in India, launched a calcium supplement for women in 2018 to expand its business in the OTC market.

This report forecasts revenue growth at global, regional, and country levels and provides an analysis of the latest industry trends in each of the sub-segments from 2014 to 2025. For this study, Grand View Research has segmented the global mineral supplements market report based on product and region: