The global mining equipment market size was valued at USD 120.82 billion in 2017 and is anticipated to record a CAGR of 11.7% during the forecast period. Growing drilling and exploration activities across the globe are projected to drive the market over the coming years. Increased adoption of automation technologies in the field has led to the augmented use of smart and connected solutions. This, in turn, has provided significant opportunities to market players for the retrofitting of existing products.

The market has further witnessed adoption of data analytics to help improve processes and reduce operational costs and losses. Big data analytics is used in a majority of the stages involved in mining processes to facilitate smart collaboration, worker safety and security, and smarter procurement of equipment. Since the operations involved are complicated, data analytics has evolved as a technological boon in identifying any equipment breakdown during the mining operation. 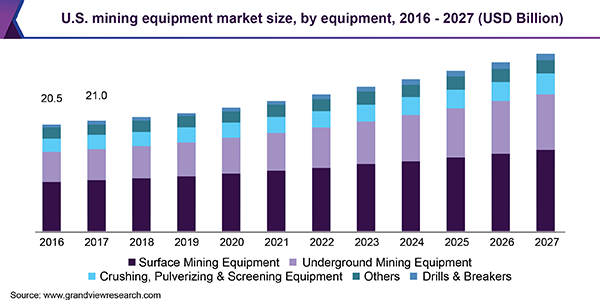 This not only increases the overall machine reliability but also improves business operation efficiency at the site. Rising demand for base metals, such as silver, gold, platinum, and copper is estimated to contribute to the revenue growth. However, favorable government policies, growth in mining-related end-use industries, and fluctuations in commodity prices may affect the demand for extraction tools in metal excavating applications.

Increased demand for metals in the Asia Pacific and Latin American regions has bolstered the adoption of extraction equipment. Furthermore, due to adverse climatic effects of excavating activities, equipment manufacturers are introducing energy-efficient equipment that has lower diesel consumption levels. Manufacturers are installing combustion catalysts, such as FuelSpec, with an aim to reduce emissions and fuel consumption during the extraction process. This will also contribute to the growth of mining equipment market in the years to come.

The surface mining equipment segment accounted for a revenue share of over 40% in 2017 and is anticipated to grow further during the forecast period. Currently, almost all metallic and non-metallic minerals along with a larger fraction of coal are mined via surface mining methods, which is expected to provide an impetus to the segment growth.

There has been continuous innovation in equipment including shovels and excavators to reduce the environmental impact without compromising the performance. For instance, Komatsu Ltd. manufactured a hybrid shovel, P&H 2650CX, based on the Switched Reluctance (SR) technology, which enables cost reduction of up to 15% per ton.

The underground mining equipment segment captured a significant revenue share in 2017 on account of substantial investments by governments in advanced technology for underground quarrying operations. For instance, in 2016, Eastern Coal Fields (ECL) in India invested USD 88.6 million at the Jhanjra underground mine to modernize the infrastructure and introduce a Low Height Continuous Miner (LHCM) at the site.

The safety challenges associated with underground mines have resulted in the deployment of fully mechanized technology with less involvement of mine workers to minimize hazards. For instance, AngloGold Ashanti Mine announced full automation of mines that are below 13,200 ft.

Metal mining is expected to emerge as the highest revenue-generating application segment over the forecast period. It was valued at over USD 54 billion in 2017 and is expected to witness substantial growth over the next eight years. Implementation of government schemes, growth in local demand, and enhancing production capacity are expected to boost the demand in metal exploration application.

The Government of India’s measures to curb metal and mineral imports and the introduction of a price floor on few existing imports are expected to review the regional metal exploration demand. The changing exploration landscape is further adding to the increased demand for mining equipment in the metal exploration application. The coal mining segment exhibits a high growth potential and is projected to gain traction over the coming years. 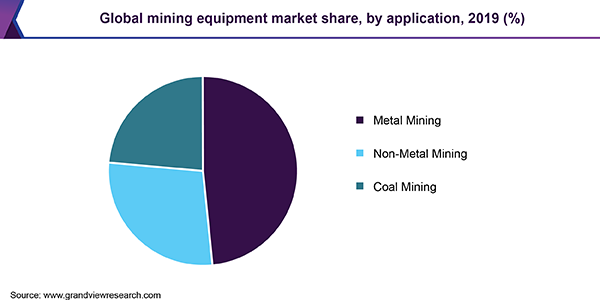 Rising population coupled with increasing economic activity have significantly fueled the demand for coal for various purposes, such as electricity generation. Exploration of coal differs on a regional basis as few countries, such as France, Finland, and Sweden, have banned coal excavating due to environmental impacts. However, many other countries including China, India, Russia, and U.S. have witnessed greater coal exploration activities, which has fueled the demand for mining equipment particularly for shearers and continuous miners.

Asia Pacific accounted for the largest revenue share in 2017 and is expected to continue its dominance over the next eight years. Growing investments in advanced excavating tools for mineral exploration in Australia and India have positively impacted the regional market growth. Additionally, China is expected to witness considerable growth in the coming years due to China’s policy toward encouraging foreign investments in the mining sector.

Moreover, the country witnesses maximum demand for equipment dominating the Asia Pacific region. Local manufacturers in the country are rapidly upgrading and expanding their product portfolio to match both domestic and international demand. Many local manufacturers have established manufacturing facilities in U.S. and Brazil, allowing them to remain in the proximity of the miners.

The Latin America and MEA regions are projected to experience significant growth over the forecast period owing to favorable regulations for overseas investors, particularly in Peru, Chile, and Colombia. The regions have a large potential for mineral exploration as compared to North America and Europe. Furthermore, low cost of mineral production and growing investments are boosting the demand in these regions.

Caterpillar, Inc.: Komatsu Ltd.; Atlas Copco AB; and Sandvik AB are some of the prominent market players. These companies are aiming at developing zero-emission underground extracting tools with battery-powered machines. They also focus on improving product efficacy and productivity, along with lowering operational costs to uphold profit margins. Upgrading and retrofitting existing products to meet current exploration demands is an important strategy adopted by most of the companies.

This report forecasts revenue and volume growth at global, regional, and country levels and provides an analysis of latest industry trends in each of the sub-segments from 2014 to 2025. For the purpose of this study, Grand View Research has segmented the global mining equipment market report on the basis of equipment, application, and region: