The global mining lubricants market size was valued at USD 2.06 billion in 2016. Growth of drilling and exploration activities on a global level, as well as increased demand for mining equipment, has a direct and positive impact on the industry demand. Moreover, equipment manufacturers increasing their capital spending to provide for the new sites opening up is expected to accelerate the growth of the market over the forecast period.

Stringent regulations imposed by government bodies towards environmental protection are anticipated to augment the demand for bio-based lubricants. As a result, regulatory support towards bio-based products coupled with superior mechanical properties of bio-lubricants as compared to synthetic lubricants is expected to act as an advantage for the product market in the near future.

The global lubricants market is governed by stringent regulations from various environmental agencies at the regional level. Since lubricants are produced through mineral oils and petrochemicals, they impact the environment in terms of biodegradability, aqueous toxicity, and recyclability. But the opportunities for implementing new technology are on the rise, and the companies can benefit from this by carefully administrating their potential while making this technology available on the market.

On account of untapped or unexplored sites in Congo, Gabon and Zambia in Africa, and Peru, Brazil and Chile in Latin America, and the growing demand for mining products including drills & breakers, crushing, pulverizing & screening equipment, and mineral processing machinery coupled with mineral processing machinery market is expected to fuel the demand for the product as a result of rising excavation of minerals and metals.

High industrialization and consumerism, increasing population as well as disposable income and rapid urbanizations are expected to fuel the demand for automatic lubrication systems in developing countries including India and China on account of rising demand from mining and metal industries such as zinc, copper, iron ore and bauxite.

Mineral oil lubricants were the most extensively used and accounting for 83.8% of the global volume share in 2016. It is obtained from the distillation of crude, which is quick to dispose of and reuse on account of existing infrastructure in place. The rise in demand for mineral oil lubricants is owning to its compatibility with metals, seals, and coatings, which can be further manipulated chemically to produce semi-synthetic through the distillation process. 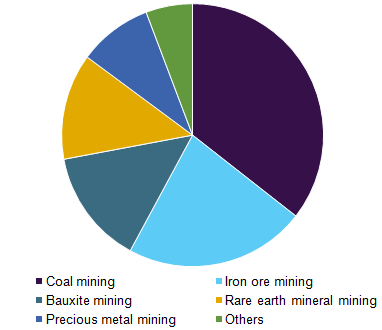 Mineral oil lubricants are cheaper than synthetic and bio-based lubricants and provide an enhanced operational benefit through supplying a stable structure to equipment, thereby expected to exhibit substantial growth over the forecast period. The high growth of mineral-based lubricants is expected over the next eight years on account of their hydrophilic properties and solvency, as well as their ability to work at standard temperatures without advanced machinery.

Demand for these lubricants was highest in coal mining at 217.9 kilo tons in 2015 and is expected to witness growth due to its increasing penetration in construction and commercial industries.

Coal, segmented into four parts including lignite, sub-bituminous coal, bituminous coal, and anthracite coal has various applications such as thermal power generation, steel manufacturing, cement manufacturing, and heating. High Demand for coal in the production of a variety of metals, chemicals, ceramics, and papers by manufacturing plants is anticipated to increase mining activities, thereby spurring the demand for the product in coal mining.

The product is also used in heavy load equipment during the process of coal mining, wherein coal mines require high-performance lubricants having resistance to oxidation, high viscosity index as well as corrosion prevention properties, therefore augmenting the demand for mining lubricants in the related industry.

In addition, increased demand for steel for the purpose of urbanization and industrialization in developing nations mainly India and China, as well as dependence on steel for construction and transportation purposes, is expected to augment the demand for iron ore mining, which will in turn fuel the demand for the product in the iron ore extraction sites.

Asia Pacific is expected to show high volume gains at a CAGR of 5.3% from 2016 to 2025. Mining is a significant economic activity for Asian countries including India, China, Australia, Indonesia. The Asia Pacific is anticipated to grow at a significant rate owing to rapid industrialization and changing lifestyles. The growing automobile industry and consumer preference for white metal jewelry in the region is expected to fuel demand for the product over the forecast period.

North America is not only one of the major manufacturers of coal, iron, natural gas, and petroleum, but is also home to major North American manufacturers in the concerned industry such as ExxonMobil Corp., Bel-Ray Company Llc., and Quaker Chemical Corp. Therefore, the utmost reliability of these market players on coal and iron ore for industrial and commercial purposes is anticipated to augment the demand for mining lubricants over the forecast period.

The market is highly competitive in nature owing to the presence of various small and large-scale manufacturers in the U.S., China, and Germany. The market is dominated by various major participants including Royal Dutch Shell Plc., BP Plc., ExxonMobil Corp., Sinopec, Lukoil, Chevron Corp., and Total S.A.

Product differentiation along with the threat of forward integration by manufacturers to distribute mining lubricants and to capture market share is expected to result in high industry rivalry in the product’s market over the forecast period. In addition, possible entry of new players is further expected to intensify rivalry in the industry.

In March 2017, Cabinda Gulf Oil Company, Chevron’s subsidiary, started the oil and gas production at Mafumeira Sul project offshore, Angola. The production capacity for liquids on the plant site is 150000 barrels while natural gas is 350 million cubic feet. Located 15 miles away from offshore Cabinda Province, this production plant in Angola will not only enhance the production and value for its partners and corporations through improved cash flow and priority completion of major projects.

This report forecasts volume and revenue growth at global, regional & country levels and provides an analysis of the industry trends in each of the sub-segments from 2017 to 2025. For the purpose of this study, Grand View Research has segmented the global mining lubricants market on the basis of product, application, and region: