The global minivans market size was valued at USD 100.7 billion in 2021 and is expected to expand at a compound annual growth rate (CAGR) of 2.9% from 2022 to 2028. Increasing disposable income, affordability, and spending on passenger vehicles are major factors influencing the market growth. As a result of economic revolution and technological developments, passenger car affordability has increased leading to the increasing contribution from a middle-income class population, which is expected to increase further over the forecast period. Increasing product launches with improved functionality and aesthetics from the key manufacturers are anticipated to increase consumer interest and encourage purchase, further fueling the market growth. 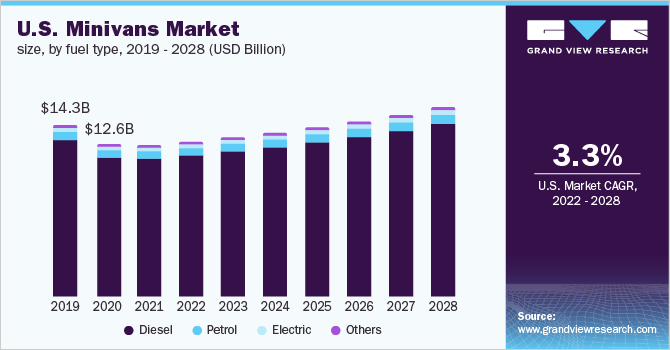 New stylish products with excellent passenger and cargo space, flexible floorplan, and connected technologies are being launched in the market by the manufacturers which are the selling points of the minivans. Global minivans industry growth is substantially restrained by rising immense popularity and increasing competition from the other passenger vehicles, especially SUVs. These vehicles are gaining traction in the most major automotive markets, hindering the market growth of minivans. Furthermore, stringent rules and regulations hamper the market growth. Stricter emission rules and standards by the governments and environmental authoritative bodies are also restraining factors limiting the market growth.

The COVID-19 pandemic negatively affected the overall automotive industry. Automotive industry production plummeted due to various challenges including, lack of labor, supply chain disruption, lack of automotive parts, shortage of semiconductor chips, etc. The minivans market experienced a fall in unit sales and market revenue during the pandemic as production was halted. Also, due to the lockdowns and restrictions, consumers’ influx to the dealer’s showroom was affected significantly resulting in a declined consumer demand. The market is likely to experience a little shadow of the COVID-19 pandemic in the future, however, recover with steady and slow growth over the forecast period.

The diesel segment accounted for a global market revenue share of over 90%. This largest market revenue share of the diesel fuel type segment is attributed to the higher consumer preference for the diesel models of minivans over the other fuel type. Diesel-powered vans are efficient as well as powerful, suitable for multipurpose vehicles such as minivans for light-duty hauling and towing capacity. Diesel-powered minivans effectively deal with the payloads running at a low cost compared to the other fuel-type vehicles. Furthermore, the majority of the minivan models available in the market are diesel engine models.

The electric segment of the fuel type is anticipated to witness the fastest growth rate, registering a CAGR of 7.3% over the forecast period. The electric vehicle market is rapidly increasing as well as evolving due to technological developments in electric batteries and other areas. It has become a prime concern of global leaders and automotive manufacturers to reduce the consumption of fossil fuels and prevent global warming. Government initiatives and manufacturers' increasing product launches are expected to drive the segment growth in the global minivans industry. For instance, according to media report more than 10 electric models are expected to make their launch in the coming years including, Chrysler Pacifica EV, Voyah Dreamer, Mercedes EQT, Hyundai Staria FCEV, etc.

The Asia Pacific dominated the global market and held the largest market revenue share of around 60% in 2021. This is credited to the higher consumer adoption and usage of minivans in China, and Japan. The body built and cargo space of the minivan models are more appealing to the consumers in the region compared to the others. Moreover, the market key player’s strong presence, higher brand awareness, and market penetration in the region are also attributable to higher market share. The market in the region is well- established with frequent product launches credited for the higher market revenue. For instance, as reported on 13th January 2022, Toyota launched new Noah and Voxy minivans in Japan, redesigned with TNGA (GA-C) platform, comfortable seats, and roomy cabin space. Also, for instance, Hyundai started to sell Staria minivans in Thailand in July 2021. 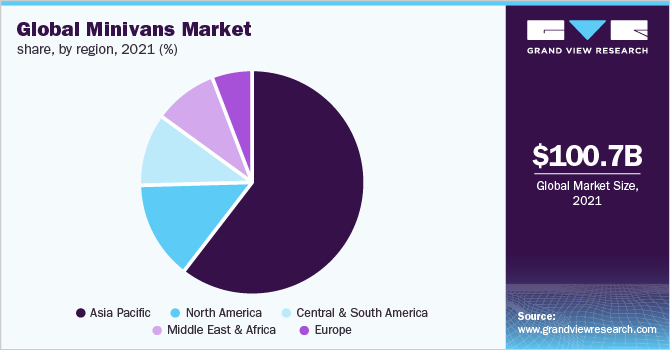 North America is anticipated to witness the highest growth rate in the global market, registering a CAGR of 3.5% from 2022 to 2028. The highest growth rate in the region is mainly attributed to the changing consumer perception about the appearance of the minivans and emerging as luxurious and stylish vehicles. Key players increasing product launches and penetration in the region are helping market growth in the region.  New minivan models have extra added perks that give them a luxurious look along with comfortable space, perfect for an outing with family and friends. For instance, the new Kia Corporation is planning to introduce the Carnival Hi Limousine minivan in the U.S. in 2022, which has special features including curtains, an air purifier, a high roof, and recliner-style seats.

The global market is characterized by the presence of large, prominent key players and is partially consolidated. The leading players are focused on the development and research activities and frequent product launches to stay ahead in the market. Also, with growing awareness about greenhouse gas emissions and air pollution, many manufacturers are investing in the electric minivans segment. To increase the consumer group, key players are focused on the expansion in the new and untapped areas. For instance, in August 2021, Kia launched a new Carnival minivan in Brazil, which comes with three rows of seats, and ample cargo/luggage space.

Some prominent players in the global minivans market are

This report forecasts revenue growth at global, regional, and country levels and provides an analysis of the latest industry trends in each of the sub-segments from 2017 to 2028. For this study, Grand View Research has segmented the global minivans market report based on fuel type and region:

How big is the minivans market?

What is the minivans market growth?

Which region accounted for the largest minivans market share?

b. Asia Pacific dominated the minivans market with a share of 60.0% in 2021. This is attributable to higher consumer spending on minivans contributed by the large consumer base in China and India.

Who are the key players in minivans market?

What are the factors driving the minivans market?

b. Key factors that are driving the minivans market growth include increasing ownership of personal cars, increasing spending, and heightened product launches.