The global mixed tocopherols market size was estimated at 117.8 kilo tons in 2016. The growing vitamin E demand in food and dietary supplements owing to rising health concerns is anticipated to drive the market over the forecast period.

Surging demand for nutritious products such as fortified food and energy drinks is expected to drive tocopherols demand in North America over the next eight years. The U.S. is expected to witness moderate growth on account of increasing health concerns in the country. Stringent government regulations and anti-dumping laws in the U.S. are anticipated to raise the demand for nature based products over the foreseeable future.

The growing demand for dietary supplement for enhancing physical endurance and improving muscle strength is expected to drivethe industry over the next few years.In addition, vitamin E reduces the sideeffects of medical treatments such as radiation and dialysis, doxorubicin and amiodarone medication.

Alpha tocopherols are the main source of vitamin E in dietary supplements.Regulatory approval to use it as antioxidants for food and as additives in nutrient preparations for use in infant formula is expected to drive the global market growth over the forecast period.

Alpha rich mixed tocopherols was the largest product segment, which accounted for 60.3% of the market volume share in 2016. Alpha rich category forms amajor component of vitamin E for human diet intake. It acts as an antioxidant and minimizes the effects of aging process. Owing to its ability to minimize risks associated with blood clotting, alpha rich find huge significance in dietary supplement and pharmaceutical segments. The aforementioned factors are expected to drive the product demand over the forecast period.

The global gamma richmixed tocopherols demand is expected to grow at a CAGR of 4.3% from 2017 to 2025. Owing to its ability to minimize inflammatory threats, gamma rich is expected to witness significant growth over the forecast period. Food sources of this product include sesame seeds, soybean, corn oils, black walnuts, flaxseeds, pumpkin seeds, and pistachios. Growth of this product segment can be attributed to its high nutritional value that can be utilized in the food & beverage industry.

The global gamma-deltamixed tocopherols demand is expected to reach over 26 kilo tons by 2025, growing at a significant rate from 2017 to 2025. Owing to its enhanced benefits including oxidizing stability and vitamin E supplement, gamma-delta is expected to gain significance over the forecast period.

Dietary supplements was the largest application segment and accounted for 43.3% of total demand in 2016. Mixed tocopherols, especially those containing high purity alpha and gamma ones have excellent antioxidant and nutritional properties. The growing importance of naturalbased dietary supplements along with growing health concerns among general consumers is anticipated to steer the segment growth over the forecast period.

Animal feed nutrition is expected to grow at a CAGR of 3%, in terms of revenue from 2017 to 2025. Vitamin E plays a significant role in improving cattle health and enhancing immunity. Factors, such as the ability of mixed tocopherols to protect animals from bacterial infection and provide enhanced dairy productivity, are expected to drive demand in this segment over the next eight years.

Surging demand for vitamin E and its derivatives in animal feed is expected to drive the application segment growth which accounted for 20.5% of the market share in terms of volume in 2016. High production capacities in Asia Pacific give flexibility to the manufacturers to scale-up the production depending on demand trends. 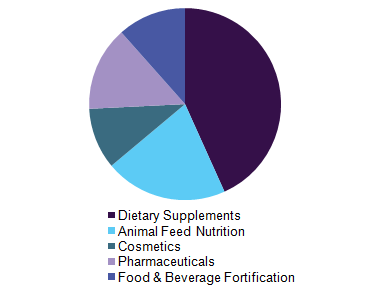 Pharmaceuticals segment accounted for 14.6% of total revenue share in 2016. Owing to its medicinal value in minimizing risks associated with diseases such as cancer, Alzheimer’s, and cardiovascular,mixed tocopherols is expected to gain significance in the pharmaceutical application segment over the long term.

In addition, mixed tocopherols are expected to gain significance in cosmetic application and generate revenues worth over USD 1.3 billion by 2025.Various skincare benefitsincluding UV protection and antioxidant/anti-aging properties have attributed to increasing product demand in the segment. The growing awareness toward health benefits associated with vitamin E is expected to drive the product demand in the pharmaceutical application over the forecast period.

North America is expected to witness growth at a CAGR of 3.5% from 2017 to 2025 on account of growing consumer health concerns across the U.S. and Canada. The stringent regulatory framework in the region is expected to drive demand for naturally derived products over the forecast period.

Europe is expected to witness moderate growth rate on account of growing demand for processed food products in the region. The CSA and the MEA regions are expected to grow rapidly over the next eight years on account of increasing meat consumption and rising cosmetic industry, especially in the emerging markets of South Africa and Brazil.

The global mixed tocopherols market is dominated by large multinational corporations such as BASF, Cargill, and ADM with significant presence across the value chain. The market is characterized by vertical integration across each component of the value chain.

This report forecasts revenue growth at global, regional & country levels and provides an analysis of the industry trends in each of the sub-segments from 2014 to 2025. For the purpose of this study, Grand View Research has segmented the global mixed tocopherols market on the basis of product, application, and region: