The global mobile VoIP market size was valued at USD 27.5 billion in 2015. Low data rates, inexpensive calling prices, and the presence of robust network infrastructure are expected to boost the growth of the mobile VoIP industry. The widespread adoption of social media applications is increasing the usage of these services. 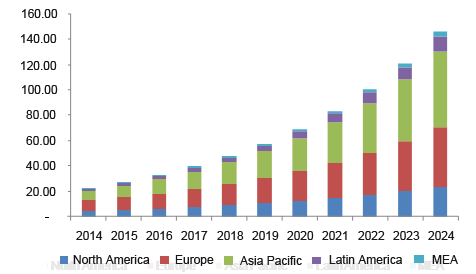 The increase in the penetration of smartphones is fueling the growth of the mobile VoIP market. Smartphone manufacturers are developing devices that are compatible with VoIP services. Moreover, the rising popularity of innovative and user-friendly applications including Skype, Viber, Line, and WhatsApp are driving the demand for mobile VoIP services. These apps enhance smartphone functionality regarding communication, connectivity, and entertainment, which exploits the full potential of the device.

However, the limited availability of high-speed networks is expected to challenge industry growth. Moreover, in a few economies, strict regulations exist against the use of VoIP services. For instance, in Turkey, VoIP is not banned but is strictly regulated.

Instant messaging is estimated to be the fastest-growing segment accounting for a CAGR of over 21% from 2016 to 2024. The widespread availability of different devices and platforms, ease of usage, and free accessibility are providing traction to the demand for instant messaging applications. These applications offer a high level of user experience and convenience over text-based messaging. With the increasing need for social connectedness, there is a growing demand for the usage of instant messaging applications which is further expected to drive the demand of the overall mobile VoIP industry.

Video and voice call segment is expected to witness considerable growth owing to the deployment of 4G services. The availability of 4G services is increasing the capability of network providers to offer high-quality voice and video calls. Various instant messaging applications are focusing on adding video and voice calling facilities to their applications owing to their growing popularity. For instance, in 2015, a popular instant messaging application WhatsApp added the voice-calling feature.

The Android OS is anticipated to dominate the mobile VoIP industry, reaching over USD 90 billion by 2024. This growth can be accredited to the rising need for smartphones with improved features such as augmented reality, flexible screens, and holographic displays. Despite the growing popularity of these devices, manufacturers are constantly differentiating by building user interface skins to provide a different mobile appearance to consumers. Moreover, unlike iOS and Windows, Android powers several popular and widely accepted devices such as Samsung, Motorola, and Sony smartphones.

The iOS is expected to witness a significant growth owing to the growing popularity of Apple products. The increased demand for luxury smartphones is further boosting the growth of iOS devices. Moreover, the company is focusing on several initiatives to reignite the growth of iOS devices. For instance, in May 2016, Apple announced its plan to open a center in India to encourage the development of applications for its iOS software that powers its mobile devices such as iPad and iPhone.

Asia Pacific is projected to be the fastest-growing region owing to the increasing subscriber base in economies such as India, China, and Japan. This growth is owing to the increased investment in the deployment of high-speed internet and the wider availability of free applications. Moreover, content and mobile consumption are on a rise in India leading to increased demand for these services.

Europe is one of the major contributors to industry growth, owing to the high internet penetration in the region, which is boosting the need for instant communication platforms such as Skype and WhatsApp. As of November 2015, Europe accounted for 82.1% of internet users. Moreover, the western and central European region is one of the fastest-growing mobile internet markets, boosting the adoption of these services over the forecast period.

The intense competition is enabling industry players to develop groundbreaking applications that are cost-effective to maintain their share. Smartphone manufacturers are focusing on providing differentiated solutions, increased capability for mass production, and reduced production costs. Telecom operators are investing in the deployment of LTE services owing to significant opportunities in carrier generation.

Key players are adopting various strategies such as acquisition and collaboration with service providers. For instance, in 2014, Facebook Inc. acquired WhatsApp to expand its reach in emerging markets. In 2014, Rakuten Inc. acquired Viber to expand its digital empire.

How big is the mobile voip market?

What is the mobile voip market growth?

Which segment accounted for the largest mobile voip market share?

b. North America dominated the mobile voip market with a share of 36.5% in 2019. This is attributable to the increased investment in the deployment of high-speed internet and the wider availability of free applications.

Who are the key players in mobile voip market?

What are the factors driving the mobile voip market?

b. Key factors that are driving the market growth include the increase in penetration of smartphones, and widespread adoption of social media applications across the world.