The global modified starch market size was valued at USD 9.36 billion in 2016 and is projected to witness a CAGR of 5.7% from 2017 to 2025. Rising demand for convenience food and rapidly developing the pharmaceutical industry, particularly in the Asia Pacific region, is anticipated to drive the growth of the global market. The market is highly competitive and fragmented with a large number of companies concentrated in North America, Europe, and the Asia Pacific.

The U.S. has been one of the leading countries in the global market, in terms of starch production, as well as consumption, on account of high demand from various end-use industries. The major end-use sectors are food & beverage, pharmaceuticals, oil and drilling, animal feed, textiles, and paper. Modified starches are generally made from maize and wheat owing to their low cost and ease of availability and processing. 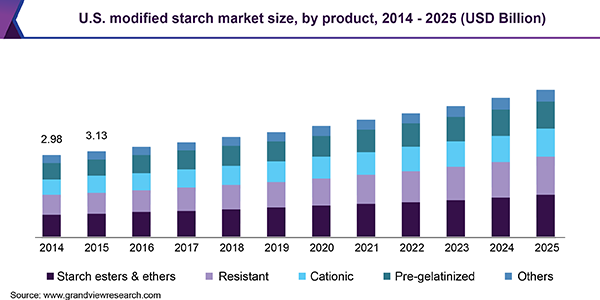 Small-scale mill owners play an important role, in terms of working in collaboration with large-scale manufacturers and act as contract manufacturers. Most of the prominent companies in this market are focusing on research and development, in terms of using new technology for processing to improve product properties and enhance overall capabilities.

Modified starch products are widely used in the F&B sector as emulsifiers, stabilizers, and thickening agents in the production of bakery products, biscuits, noodles, and other convenience food products. The Asia Pacific is expected to be the fastest-growing market on account of the expansion of production facilities and increasing product demand from the food, paper, and textile sectors in the region.

In terms of volume, cationic starches are anticipated to witness rapid growth at 4.6% from 2017 to 2025. This growth can be attributed to the product’s unique property of dry strength and emulsification of sizing agents, which has wide use in the paper industry. The above factors along with many retention and drainage properties will augment the product demand in the paper industry over the coming years. Starch esters & ethers led the market in 2016.

Growing consumption of these products in bakery, dairy, and convenience foods, owing to their ability to enhance food texture and shelf life is expected to propel their demand further. Positive food & beverage industry outlook in China and India will also drive the segment. These emerging economies are also expected to witness a significant growth in the pharmaceutical industry owing to increasing consumer demand for sophisticated medicines, which, in turn, will propel product demand over the forecast period.

The corn-based modified starch segment led the market in 2016 and is anticipated to continue its domination over the forecast period expanding at a CAGR of 5.9%. Corn is one of the most widely available raw materials. Corn-based modified starch is extensively used across various end-use industries as stabilizers, thickening agents, and emulsifiers. Cassava starch is widely used in applications, such as food, beverages, confectionery, paper, pharmaceuticals, adhesives, textiles, and building materials. The growth in the cassava-based segment is primarily driven by the remarkable characteristics of these products, such as high paste clarity, freeze-thaw stability, and paste viscosity.

In terms of revenue, the thickeners segment dominated the global market in 2016 and is likely to ascend at a CAGR of 5.7% over the forecast period. Modified starch as a thickening agent intensifies the viscosity of a liquid without significantly changing its other properties. It is extensively consumed in the F&B industry, especially in sauces, puddings, gravies, and soups without altering the taste. It is also very useful for emulsifying the end-use products in various industries, especially in F&B products that contain flavored oils. The emulsifier segment is also anticipated to witness healthy growth over the forecast period.

The food & beverage segment led the global market and held 37.6% of the revenue share in 2016. The product is used in desserts, allowing it to thicken with the addition of cold water or milk. Similarly, cheese sauce granules or gravy granules may be thickened with boiling water without the product going lumpy. 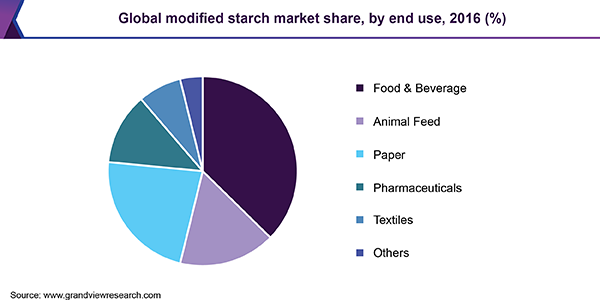 The advantages of small mills located close to farms for starch production from root crops has helped in reducing their transportation and logistics costs, thereby improving the efficiency and reducing overheads. The intervention of government policies like FDI is expected to drive the market in India with the country being the leading raw textile material producer in the Asia Pacific.

North America led the global market and held over a 40% revenue share in 2016. Rising awareness about the benefits of consuming low-fat food is expected to fuel the product demand in the region, particularly in the U.S. as it is one of the world’s leading producers of corn and corn starch. Canada is the second-largest contributor in the North American market on account of rising product demand in the animal feed sector. Favorable government policies in agriculture trade to promote modified starch products and investments in the industry have created new growth opportunities in the Asia Pacific region.

Countries, such as India, China, Japan, South Korea, and Taiwan depend on the agriculture sector to some extent for economic growth on account of it being a major contributor to their GDP. The Asia Pacific has accounted for a major chunk of the global production with high levels of development in the emerging economies. The textile industry in the Asia Pacific is also expected to have a positive impact on the global market.

Cargill Inc. was among the prominent market players in 2016. The company provides modified starch products for personal care, beverages, confectionery snacks, and food. In July 2015, Cargill launched an instantly modified starch called ‘C PulpTex 12931’. This product can withstand harsh processing conditions and can improve the texture in sauces, condiments, and soups. Archer Daniels Midland Company (ADM) offers starch products that are widely used in food products mainly to extend the shelf life and in baked foods to add strength.

This report forecasts revenue and volume growth at global, regional, and country levels and provides an analysis of the latest industry trends in each of the sub-segments from 2014 to 2025. For this study, Grand View Research has segmented the global modified starch market report based on product, material, function, end-use, and region: