The global monitor arm market size was valued at USD 1.3 billion in 2019 and is anticipated to register a revenue-based CAGR of 2.7% from 2020 to 2027. Monitor arm is a supportive arm or bracket used to hold a computer display, notebook, and other display screens. According to the International Telecommunication Union (ITU), more than 40% of the households in Asia Pacific have computers as compared to 37.8% in 2015. This is attributed to the rising disposable income and technological advancements in countries such as India and China. 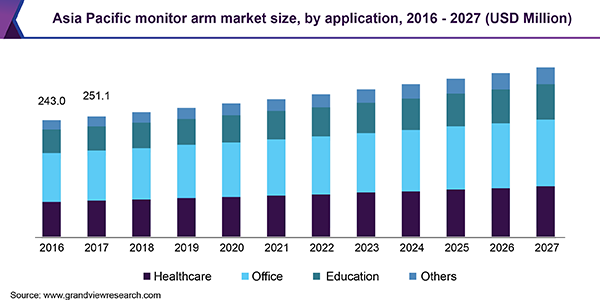 Increasing number of small businesses is fueling the demand for monitor arm. For instance, according to the Chamber of Commerce, around 400,000 small businesses began their operations each year in the U.S. from 2009 to 2016. These businesses require computers and other display monitors for a technologically advanced infrastructure to increase productivity, manage workload, and ensure efficiency. However, availability of products manufactured from low-quality raw material is adversely affecting market growth.

Increase in the number of internet users is one of the major drivers for the market. Majority of the people use internet services on desktops, laptops, and tablets. According to Our World in Data publication, the global number of internet users increased from 413 million in 2000 to more than 3.4 billion in 2016. Furthermore, as per the study conducted by the American Community Survey (ACS), in 2016, around 89% of the households in the U.S. had a computer as compared to 79% in 2015. These numbers are projected to rise owing to the rising disposable income and technological advancements, thereby resulting in market growth.

Rising usage of computer accessories for gaming is also anticipated to fuel market growth. This has enabled manufacturers to enhance their product offerings and address the varied demands of consumers. For instance, LUMI Legend Corp. has a specialized pro gaming monitor arm. Furthermore, the monitor arm can support both single display and multiple display monitors. Single screen monitor arm are preferred at workstations in various commercial and government spaces whereas multiple display monitors are used in private and government firms to enhance employee productivity.

Rising demand for TVs is also anticipated to drive market growth over the coming years. Monitor arm for TV sets are widely used in the healthcare sector to allow the patient to move the TV over the bed as per their convenience. Furthermore, several TV manufacturers are focusing on introducing TVs with advanced technologies such as 4K and 8K. Moreover, increasing adoption of curved TVs is expected to drive market growth over the forecast period.

The application segment is segmented into healthcare, office, education, and others. The office segment held the largest market share exceeding 30% in terms of revenue in 2019. Features such as single screen monitor arm, multiscreen monitor arm, and advanced technology for arm movement eliminate additional efforts and increases the productivity of workers. Furthermore, increasing number of start-ups is driving the demand for computers and laptops, thereby resulting in the monitor arm market growth. 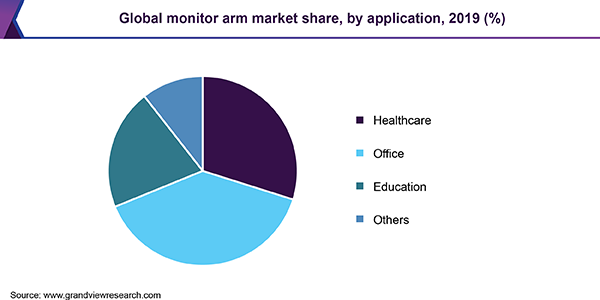 Meanwhile, the healthcare segment is projected to register the highest CAGR of over 2% in terms of revenue from 2020 to 2027. This upsurge is due to increasing demand for monitor arm, which results in the ease of access to computers for effortless recording and data viewing from multiple angles. Furthermore, monitor arm with specific designs that offer cable management within the arm provide an organized appearance on workstations and reduce the chances of the operator’s entanglement with wires during work. Such arms also ensure better performance of medical teams in hospitals and other healthcare setups.

In 2019, North America held the largest market share of over 35% in terms of revenue. This share is attributed to the increasing number of private and corporate offices along with advanced infrastructure in the educational and healthcare sectors. Furthermore, increasing adoption of technology in the hospitality sector is anticipated to boost the demand for monitor arms in this region. The U.S. is considered as the major contributor in terms of revenue over the forecast period considering the technological advancements in the healthcare sector.

Furthermore, market players are focusing on forming strategic alliances with healthcare organizations to expand their business in this region. For instance, Innovative Office Products, LLC entered in a partnership with healthcare organizations such as Fresenius Medical Care, VA Medical Centre, and Cedars-Sinai to develop ergonomic space-saving mounts to enhance the productivity of medical teams. This partnership has led to the company to provide monitor mounts and wall mounts for patient exam rooms, dental offices, and nurses’ stations, among other units of the healthcare center.

Asia Pacific is projected to emerge as the fastest-growing region with a CAGR surpassing 3% in terms of revenue over the forecast period. This is attributed to the increasing number of computer users over the past few years. China and Japan are the most lucrative countries to monitor arm manufacturers owing to the rising usage of household computers for educational, gaming, and communication purposes. Furthermore, the government of India has taken initiatives such as Phased Manufacturing Programme (PMP) and National Policy on Electronics (2019) to promote the manufacturing of personal computers in the country.

Similarly, various companies are engaged in regional expansion, mergers, acquisitions, and strategic collaborations to expand their business at global and regional levels. For instance, in August 2017, Legrand AV Inc. announced the acquisition of Milestone AV Technologies LLC, which is one of the key manufacturers of monitor mounts. Through this acquisition, Legrand AV Inc. expects to strengthen its position in digital infrastructure. Furthermore, in April 2018, Herman Miller, Inc. announced the merger of its Chinese manufacturing factories located in Ningbo and Dongguan. This merger has increased the production and efficiency of its Ningbo factory and has thereby ensured enhanced service for its customers in Asia Pacific region.

This report forecasts volume and revenue growth at global, regional, and country levels and provides an analysis of the latest industry trends in each of the sub-segments from 2016 to 2027. For the purpose of this study, Grand View Research has segmented the global monitor arm market report on the basis of application and region:

How big is the monitor arm market?

What is the monitor arm market growth?

Which segment accounted for the largest monitor arm market share?

b. North America dominated the monitor arm market with a share of 40.4% in 2019. This is attributable to increasing number of private and corporate offices coupled with demand for advanced infrastructure in the educational and healthcare sectors.

Who are the key players in the monitor arm market?

What are the factors driving the monitor arm market?

b. Key factors that are driving the market growth include rising usage of computer accessories for gaming coupled with the increasing number of small businesses.