The global MRI-guided neurosurgical ablation market size to be valued at USD 865.2 million by 2027 and is expected to grow at a compound annual growth rate (CAGR) of 7.3% during the forecast period. The increasing prevalence of brain tumors and other nervous system-associated disorders and the rising adoption of less invasive neurosurgeries are the major factors expected to fuel the market growth. An increasing number of patients suffering from brain tumors is one of the high-impact rendering drivers for the market. As per the World Cancer Research Fund International data report 2018, around 296,851 new cases of brain and central nervous system cancer were diagnosed globally in 2018. Similarly, according to the American Cancer Society 2020, in the U.S., around 23,820 new cases of malignant brain tumors are expected to be diagnosed in 2020. This is anticipated to boost the demand for MRI-guided neurosurgical ablation during the forecast period. 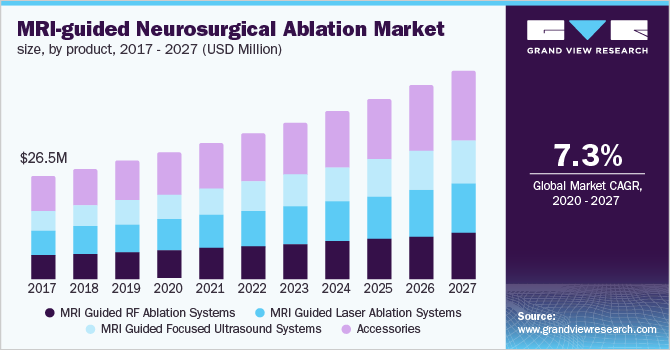 Several initiatives are being undertaken by various governments and private organizations to spread awareness related to early brain disorder diagnosis and treatment. For instance, the month of May is being recognized as “Brain Tumor Awareness Month”. A campaign launched by the National Brain Tumor Society-“It’s Your Fight, It’s Our Fight” aims at educating and engaging the people through activities that can lead to increased awareness and cure for brain tumors. Similarly, the HeadSmart national awareness campaign funded by the Brain Tumor Charity aims to reduce brain childhood brain tumors and cancer diagnosis times to 4 weeks or less. This growing awareness among people regarding the treatment and diagnosis is likely to boost the market growth.

Countries such as the U.S. and Canada have witnessed increasing cases of brain-related disorders and a growing number of surgeries in recent years. Increasing the prevalence of brain cancer is majorly driving the market. According to the National Brain Tumor Society, in the U.S., around 700,000 people are surviving with brain tumors. This includes 69.8% of benign tumors and 30.2% of malignant tumors. It is estimated that in 2020, approximately 87,240 people will be diagnosed with a primary brain tumor. Similarly, as per the Brain Tumor Foundation of Canada, approximately 55,000 people are living with a brain tumors in Canada, and in 2020, it is estimated that around 3,000 Canadians will be diagnosed with brain and spinal cord cancer. Thus, increasing the prevalence of brain cancer is anticipated to boost the market growth in the forecast period.

Additionally, an increasing number of cases of neurological disorders, including brain tumors, in developed and developing countries has driven the launch of technologically advanced products in the market. For instance, Insightec’s MR-guided Focused Ultrasound (MRgFUS) is used for the treatment of essential tremor and tremor-dominant PD. This procedure is incisionless and produces ultrasound beams, thus heating and removing targeted tissue from the brain. Thus, market players are making constant efforts for introducing technologically advanced products in the market.

The market's key driver is the growing number of individuals suffering from brain tumors. The high occurrence of nervous system-related ailments and brain tumors, as well as the expanding acceptance of less intrusive neuro-surgeries, are driving market expansion. According to the World Cancer Research Fund International statistic report in 2020, around 308,102 new cases of brain and central nervous system were reported globally. Likewise, the American Cancer Society reported that in 2022, about 25,050 cases of brain and spinal cord malignant tumors will be diagnosed in the country.

Based on the product, the market for MRI-guided neurosurgical ablation is segmented into MRI-guided RF ablation systems, MRI-guided laser ablation systems, MRI-guided focused ultrasound systems, and accessories. The accessories segment dominated the market with a share of 31.6% in 2019 and is expected to witness the highest growth from 2020 to 2027. The application of accessories is more as compared to the devices. There are various accessories that are used in performing surgeries, such as curettes which are used for delicate and precise neurosurgeries, rongeurs which are used to open a window in skull bone in neurosurgery, and dissectors which enable neurosurgeons to perform a minimally invasive discectomy. These accessories are designed to help neurosurgeons in the diagnosis and restoration of the central nervous system. Thus, benefits offered by the accessories segment are expected to fuel the segment growth.

As neurosurgeons routinely operate on the most delicate nervous system of the human body, they require certain accessories that can help in their surgical treatment. In order to ensure optimal surgical outcomes, the surgeons need high-quality sets of accessories that can assist in the surgical procedure. This segment includes certain advantages, such as they meet the quality standard in terms of functionality, maneuverability, and precision to ensure patient safety during a surgical procedure, thus driving the demand for MRI-guided neurosurgical ablation devices during the forecast period.

On the basis of end-use, the market is segmented into hospitals, clinics, and ambulatory surgical centers. The hospital segment dominated the overall market with a share of 65.3% in 2019. As hospitals consist of an independent department of neurosurgery that includes a team of senior consultants with expertise and they are backed by a skilled support staff team, which makes them work efficiently. In hospitals, the department of neurosurgery is well equipped with technologically advanced products. Most of the neurosurgeries are performed in hospitals as it provides the best possible treatment and it involves skilled neurosurgeons to perform complicated neurosurgical procedures, such as MRI-guided laser ablation brain surgery, which uses laser technology to treat epilepsy and remove a brain tumor. Thus, these factors are anticipated to increase the demand for MRI-guided neurosurgical ablation devices during the forecast period. 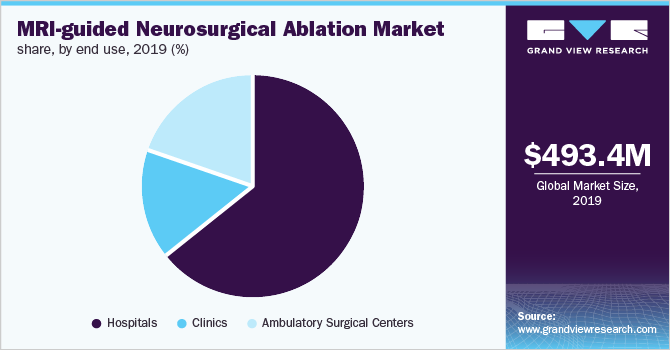 The ambulatory surgical center segment is expected to expand at the highest CAGR of 7.8% from 2020 to 2027 as ASCs are medical centers that provide same-day surgeries and patients do not require to stay overnight. They mainly perform procedures involving non-invasive surgical techniques as they have fewer complications. It includes less damage to the body as compared to open surgery. Most ASCs use MRI-guided neurosurgical ablation technology for brain tumors that allows surgeons to perform MRI-guided laser ablation surgery. This surgical treatment involves less invasive surgeries and in most cases, it has a shorter recovery time as compared to the traditional method. Thus, this segment is expected to witness the fastest growth as it operates patients with fewer complications than hospitals.

North America dominated the market with a share of 34.6% in 2019. This is attributed to the presence of well-established healthcare facilities in the region, the increasing prevalence of brain cancers as well as malignant tumors in the brain, and the availability of highly skilled neurosurgeons. The market for North America is majorly driven by the growing occurrence of targeted diseases, such as neurodegenerative diseases and brain tumors, mostly malignant ones. In addition, the presence of major key players, such as Medtronic, Boston Scientific Corporation, and Insightec Ltd., is contributing to the market growth in the region. Thus, a growing number of minimally invasive neurosurgical procedures and the increasing prevalence of neurology diseases are primarily driving the market. 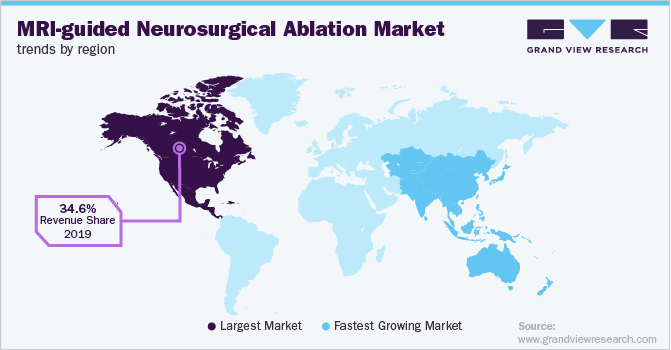 Asia Pacific is expected to expand at the highest CAGR of 7.6% from 2020 to 2027 owing to factors such as the presence of a large patient base, increasing medical tourism, rising healthcare expenditure by the government, and adoption of minimally invasive surgeries. In addition, countries in this region are expanding their intensive care units in hospitals as well as in other ambulatory surgical units for the treatment of neurosurgeries as there are a large number of people suffering from brain cancer, Alzheimer’s disease, and many other nervous system disorders. Thus, these factors are boosting the market growth in this region.

Companies are focusing on research and development to develop technologically advanced products to gain a competitive edge. For instance, in January 2019, MRI Interventions, Inc., a neurosurgery company, received U.S. FDA approval for the ClearPoint PURSUIT Neuro Aspiration system. This device is developed in association with the Mayo Clinic and is designed for the aspiration of clotted blood, cystic tumors, colloid cysts, cerebral spinal fluid, and abscesses. Similarly, in April 2018, Medtronic announced the launch of the Visualase MRI-Guided Laser Ablation System in the European market, which is a minimally invasive laser therapy that precisely targets and treats small areas of unwanted tissue designed for the treatment of brain disorders. These advancements are anticipated to boost the market growth over the forecast period.

Companies are involved in mergers, partnerships, and acquisitions, aiming to strengthen their product portfolio, and manufacturing capacities, and provide competitive diversity. For instance, in March 2020, Insightec raised USD 150 million for the development of an incisionless surgical device used for the treatment of tremors in patients that are not responsive to medication and tremor-dominant PD. In addition, in December 2017, Medtronic acquired Crospon, an Ireland-based gastrointestinal disorder diagnostic company, in a transaction value of USD 45 million. This acquisition has provided the company to access FDA-cleared devices of Crospon for assessing motility disorders.

Some of the prominent players in the MRI-guided neurosurgical ablation market include:

This report forecasts revenue growth at the global, regional, and country levels and provides an analysis of the latest industry trends and opportunities in each of the sub-segments from 2016 to 2027. For the purpose of this study, Grand View Research has segmented the global MRI-guided neurosurgical ablation market report on the basis of product, end-use, and region. 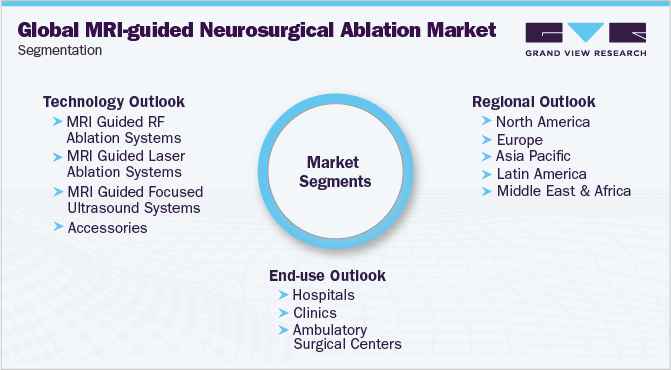 How big is the mri guided neurosurgical ablation market?

b. The global MRI-guided neurosurgical ablation market size was estimated at USD 493.4 million in 2019 and is expected to reach USD 527.7 million in 2020.

What is the mri guided neurosurgical ablation market growth?

b. North America dominated the MRI-guided neurosurgical ablation market with a share of 33.9% in 2019. This is attributable to the rising prevalence of brain cancer and the increasing number of minimally invasive neurosurgical procedures.

Who are the key players in mri guided neurosurgical ablation market?

b. Some of the key players operating in the MRI-guided neurosurgical ablation market include Monteris Medical, Inc., Medtronic, Insightec Ltd, and MRI interventions, Inc.

What are the factors driving the MRI-guided neurosurgical ablation market?

b. Key factors that are driving the market growth include rising prevalence of brain cancer, increasing adoption of minimally invasive surgeries, and favorable reimbursement policies.