The MPLS IP VPN services market is poised for high growth as several enterprises are expected to incorporate these networks to harness various benefits offered by them such as performance maximization and cost minimization. Even though the VPN market has considerably matured over the last five years as the majority of enterprises have implemented some or the other form of VPN, managed network-based MPLS IP VPN services that exhibit appreciable growth potential. 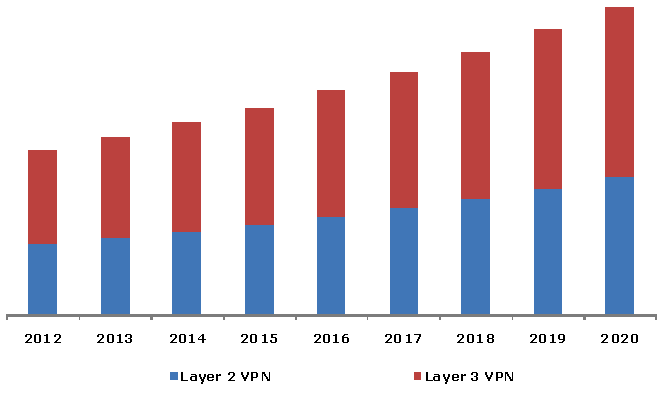 The declining ATM/frame relay market is expected to buoy the MPLS IP VPN Services market growth throughout the forecast period. Enterprises migrating from a packet have implemented layer 2 and layer 3 MPLS IP VPN Services, with the latter generating a major proportion of the revenue. MPLS IP VPN Services helps enterprises in prioritization of applications such as Voice over Internet Protocol (VoIP) by a class of service (CoS), creation of disaster recovery infrastructures and reducing complexity to simplify network management. The ability to provide scalable bandwidth and convergence of voice, data, and video from multiple platforms on a single platform is expected to encourage the incorporation of MPLS IP VPN Services. The technology considerably helps meet increasing traffic requirements where additional capacity is required.

Due to decreasing bandwidth costs and growing concerns pertaining to IT costs and network security, organizations have increasingly started adopting a cloud-based approach, which necessitates the addition of more locations in their network along with inter-network connectivity. With its ability to easily support multipoint full-mesh connectivity, MPLS is more suited to meet the aforementioned requirements. MPLS IP VPN Services also is well-equipped to address the security issues faced as more and more enterprises move data to the cloud. Cloud-based services accessed via IP VPNs are expected to play a pivotal role in market growth throughout the forecast period.

As compared to L2VPN, Layer 3 VPNs (L3VPN) are ubiquitous and available with a majority of service providers, as a result of which enterprises can plan and implement a network globally with relative ease. Additionally, several equipment vendors provide equipment such as VPN dialers, firewalls, and Integrated Access Devices (IADs) which help enterprises build layer 3 MPLS IP VPN Services themselves. Enterprises that opt for layer 3 MPLS IP VPN Services services typically have more than 20 corporate locations which require a bandwidth of 10 Mbps or lower. The IT departments of such enterprises prefer outsourcing their networking and routing decisions.

L2VPN services have started gaining considerable traction to address the demand for enhanced security which is required in several applications where data integrity is of utmost importance such as banks, government agencies, and defense. Several prominent carriers such as AT&T and BT have deployed L2VPN solutions globally, whereas a few regional service providers have also strengthened their offerings. Enterprises opting for L2VPN services generally have fewer than 20 corporate locations, which need the bandwidth of more than 10 Mbps. The IT departments of such enterprises are usually sophisticated and desire to maintain firm control of their networking and routing decisions.

Video conferencing is expected to emerge as a key application area owing to the high quality of service (QoS) offered by MPLS. Networks need to ensure a high QoS in order to run apps such as VoIP for video conferencing as they are intolerant to latency and other irregularities. MPLS IP VPN Services offers significant bandwidth between the service provider network and the user’s site to satiate the requirements of VoIP. Audio conferencing is projected to be a lucrative and fast-growing application sector. Small and medium-sized businesses (SMBs) using broadband and LTE wireless access present a favorable growth potential for the MPLS IP VPN Services market.

IT managers in organizations usually have to take decisions pertaining to the deployment of hardware or software VPNs. As compared to their software counterparts, hardware VPNs provide enhanced security to the enterprise. Software-based VPNs share a server with other operating systems and applications, making them more prone to attacks thereby compromising their security to a certain degree.

The Asia Pacific and North America constituted the key regions of the MPLS IP VPN Services market in 2013 and are expected to exhibit high growth throughout the forecast period. U.S.-based providers Verizon Business, Sprint, Global Crossing, AT&T have extensive national networks, with MPLS PoPs in several major U.S. and Canadian cities along with second-tier U.S. markets. There has been a significant influx of international carriers in the MPLS IP VPN Services market such as BT, Reliance Globalcom, Orange Business Services, Telstra International, and Telefónica in North America over the last few years to serve their existing MNC clients having offices in the region.