The global myasthenia gravis (MG) treatment market size was estimated at USD 1.16 billion in 2018 and is anticipated to grow at a CAGR of 7.5% over the forecast period. The key factors driving this market include the rising adoption of immunotherapies, the approval of promising drugs, the emergence of biologics, and increasing awareness of rare diseases. 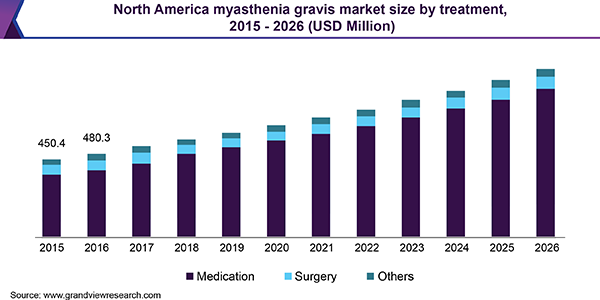 Myasthenia gravis (MG) is a chronic, progressive, and rare neuromuscular disorder that is characterized by weakness of the head, limb, spinal, eye, and respiratory muscles. In this autoimmune disorder, antibodies are produced against the acetylcholine receptor (AchR) that impedes the normal transmission of electrical signals from nerves to muscles.

According to the National Organization for Rare Disorders (NORD), in the U.S. around 14-40 per 100,000 individuals suffer from myasthenia gravis. Reports suggest that the frequency of the disorder is on the rise over the last several decades. This can be attributed to the better identification of patients and the increasing prevalence of autoimmune disorders in general across the world.

Myasthenia gravis occurs more frequently in females than in males, and although symptoms may appear at any age, its onset usually peaks in men in their 50s or 60s and women during their 20s or 30s. There is no proven cure for myasthenia gravis, however, patients can be treated with medications and surgery for the management of the symptoms.

At present, research is focused on a better understanding of the specifics of the autoimmune problems associated with MG and improving their diagnosis and treatment. Additionally, the market is observing a paradigm shift in the area of research from suppressing the immune system to rebalancing it. Another important area of research is the physiology of the neuromuscular junction (NMJ), aimed at improvement in its function regardless of probable immune system attacks.

Among the treatments, medication held the largest market share and is expected to maintain its leading position through the forecast period. This is because medications can dramatically inhibit the immune system and largely manage the associated symptoms. Medications include immunotherapies such as Soliris (eculizumab), corticosteroids, and immunosuppressive drugs such as Prograf (tacrolimus) and Neoral/Sandimmune (cyclosporine). The other major treatment alternative, surgery, is the most invasive in nature and usually involves a thymectomy (thymus removal). The thymus deteriorates with age (thymic involution), however complete loss of the thymus in such manner will significantly weaken a patient’s immune system.

The myasthenia gravis treatment market is witnessing an upsurge in the number of pipeline studies for drug development that is expected to drive the market. Recently, Alexion Pharmaceuticals’ Soliris (eculizumab) received approval by both the U.S. FDA and the European Commission for the treatment of adult patients with generalized myasthenia gravis who are anti-AchR antibody-positive. Soliris is the first and only complement inhibitor approved for this disorder. The increasing use of monoclonal antibodies and immunosuppressants is aimed at the reduction of lifelong exposure to corticosteroids and improvement in long-term results.

Based on end-use, the myasthenia gravis treatment market has been segmented into hospitals, clinics, and others. The hospital segment held the largest market share in 2018 and is expected to grow at the highest CAGR over the forecast period. This can be attributed to access to a large patient pool and high demand for advanced equipment for MG treatment in hospital settings. There has been an increase in the number of patient visits for diagnosis and treatment of MG due to the availability of a broad range of treatment options in such facilities. Furthermore, one of the major factors contributing to its large share is the increased investment in state-of-the-art healthcare infrastructures. 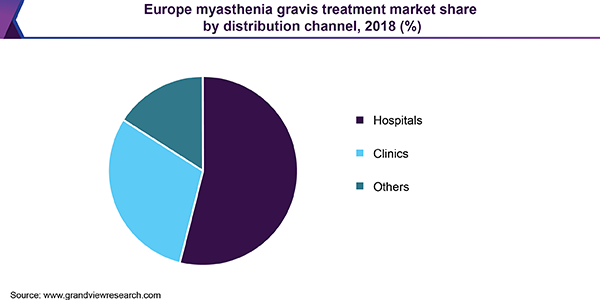 The clinic segment held the second-largest share in 2018 and is expected to retain the position through the forecast period. Currently, with the growing need for specialized treatments, a lot of patients are preferring specialty clinics for rapid diagnosis and effective MG treatment. A large segment of the end-users also depends on eCommerce channels for obtaining therapeutics for myasthenia gravis. These segments are significantly contributing to the growth of myasthenia gravis treatment market.

Among all the regions, North America had the largest market share in 2018 and is projected to lead the market over the forecast period. This can be attributed to the high adoption of immunotherapies and monoclonal antibodies, increasing healthcare expenditure, presence of established research and development facilities, and favorable reimbursement scenario.

Asia Pacific is anticipated to grow at the fastest CAGR through the forecast period due to the increase in revenue generation from medications such as immunosuppressants and monoclonal antibodies in this region. Other factors propelling the growth are the initiatives associated with increasing investments in the healthcare sector by the governments and manufacturers in the region.

However, generic competition is a major hindrance to market growth, due to patent loss of several marketed products and the availability of low-priced substitutes to branded drugs in the market. To gain an advantage against competitors, companies are adopting strategies such as expansion in the emerging countries, new product development, spreading awareness, and getting into collaborations.

This report forecasts revenue growth at global, regional, & country levels, and provides an analysis of the industry trends in each of the sub-segments from 2015 to 2026. For the purpose of this study, Grand View Research has segmented the global myasthenia gravis treatment market report on the basis of treatment, end-use, and region:

How big is the myasthenia gravis treatment market ?

b. The global myasthenia gravis market size was estimated at USD 1.7 billion in 2019 and is expected to reach USD 1.8 billion in 2020.

What is the myasthenia gravis treatment market growth?

b. North America dominated the myasthenia gravis market with a share of 48.4% in 2019. This is attributable to the high adoption of novel therapies, increasing research and development investments, and favorable reimbursement scenario.

Who are the key players in myasthenia gravis treatment market ?

What are the factors driving the myasthenia gravis treatment market ?

b. Key factors that are driving the market growth include rising adoption of immunotherapies, approval of promising drugs, emergence of biologics, and increasing awareness of rare diseases.