The global nanosilica market size was estimated at 3,348.3 kilo tons in 2015. Rising demand from the rubber industry in light of the growing automotive industry is expected to be a key factor propelling market growth. The global market is projected to reach USD 5,140.2 million by 2025, growing at a CAGR of 7.6% from 2016-2025. This growth is expected to be driven by the growing use of nanosilica as an additive in various application segments such as concrete, rubber, and others. The Asia Pacific and North America together estimate for 68.3% of the global market revenue. The growing demand for coatings due to growth in coatings applications in the construction industry is propelling the growth of the market in these regions.

Nanosilica is extensively used in a wide range of applications such as rubber, healthcare & medicine, food, plastics, concrete, electronics, cosmetics, agriculture, gypsum, battery, and others. Usage in rubber and concrete application is further propelling the growth of the market over the forecast period. The rising awareness about nanosilica intermediary products is also expected to fuel market growth over the forecast period.

Nanosilica is used in concrete mixture to improve the strength and reduce the environmental impact. Also, its advantageous properties such as nano-sized particles that enable them to fill in the gaps which cannot be filled by cement particles. On account of these factors, the global market is expected to witness a significant rise growing at a rate of 5.0% from 2016-2025, in terms of volume.

Stringent regulations are expected to restrict the usage of nanosilica in various application segments. Under article 13 by European Commission, cosmetic products that contain nanomaterials shall be notified six months before the product is being launched in the market. Furthermore, according to EU Commission No. 1223/2009, usage in cosmetics over specified limits may be harmful to the human body.

Rising investments in research & development, particularly across the major economies like China, India, U.S., and others, has been a dominant factor propelling the demand for nanosilica globally. Extensive R&D results to improve the product, which opens new avenues for the usage of nanosilica into new application areas such as healthcare & medicine, and agriculture.

P-type emerged as the leading product category in 2015 and was estimated at 47.1% of the global volume share. The increasing demand from the concrete industry which was augmented by the construction sector including residential and commercial buildings is projected to propel the market growth. The growing end-use sector, particularly in the Asia Pacific and North America region, is projected to be a key factor for the increased demand for the P-type products over the forecast period.

Due to dispersivity property S-type can be used as high content filler material for several resin applications. Moreover, the applications include electronics, coatings, and varnishes which reduce viscosity, flash, and increases fluidity. These factors make it useful for external additive materials, sintering materials, filler for liquid type sealants, and others.

S-type was estimated as the second-largest product segment, accounting for a share of 43.8% of the overall market in 2015. This growth can be credited to substantial growth in developing economies, owing to the growing population and increasing purchasing power of consumers. Furthermore, the biocompatibility of nanosilica has accelerated the product demand in the healthcare & medicine industry. In terms of revenue, the S-type product market was valued at USD 1,057.6 million in 2015 and is expected to reach USD 2,221.1 million by 2025.

The fluctuation in prices of nanomaterials is attributed to the volatile raw material prices and the complexity of manufacturing processes adds to the expense of the end product. These factors may negatively impact market growth over the forecast period. Other than this, it reduces the release of toxic gases and thus helps to reduce the environmental footprint of concrete mix manufacturers.

The global demand nanosilica has witnessed a surge in the growth owing to increasing demand from various application sectors. Rubber industry emerged as the largest application in terms of volume and revenue which was accounted for over 32.0% of the global market volume share in 2015. 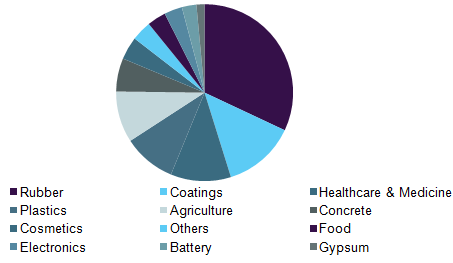 It is used as an additive in various types of rubbers which includes natural rubber, ethylene propylene diene monomer (EPDM), styrene-butadiene rubber (SBR), ethylene acrylic rubber (AEM), nitrile rubber (NBR) and silicone rubber. It is extensively utilized as a reinforcing agent to enhance the mechanical strength of vulcanized rubber. The tensile strength of natural rubber is low which can be increased to 14 Mpa from 0.35 Mpa. Besides, it increases other mechanical properties of the rubber such as anti-friction, toughness, anti-aging, and durability, which is also expected to fuel the market growth over the forecast period. China, India, and the U.S. are expected to account for the highest production owing to the growing automotive industry in these countries.

The coating segment followed the rubber application segment in 2015 and is projected to account for 13.2% of the global market volume share. Nanosilica was widely utilized in the superhydrophobic coating which helps to create a high water contract and low sliding angle which is credited to superhydrophobicity in the coating application. Low prices of nanosilica in comparison with its expensive counterpart such as carbon nanotube has bolstered the demand in the coating industry.

The Asia Pacific accounted for as the largest nanosilica market accounting for 47.5% of the global revenue market share in 2015. Emerging economies in the region such as China, India, and Japan have been witnessing strong economic growth in light of growing industrial activities in various application sectors such as coatings, rubber, agriculture, food, concrete, healthcare & medicine, and others.

China was estimated as the largest consumer of nanosilica globally accounting for 900.6-kilo tons in 2015 on account of growing industrial activities in the country. Nanosilica is extensively used in the concrete mixture as an additive which is supported by rising infrastructural growth in China. North America emerged as the second-largest market which accounted for 20.7% of the total volume in 2015. The presence of major end-user companies is further supporting the growth of the market in this region.

The key market players are investing to design environment-friendly and sustainable nanosilica that can be used in various applications. The application scope of the market is primarily driven by different physical and morphological properties.

This report forecasts revenue growth at global, regional & country levels and provides an analysis of the industry trends in each of the sub-segments from 2014 to 2025. For this study, Grand View Research has segmented the global nanosilica market based on product and region: