The global narcolepsy therapeutics market size to be valued at USD 3.85 billion by 2025. The market is expected to grow substantially owing to the rising incidence across the globe. Narcolepsy is generally a lifelong sleep disorder with the occurrence of sudden uncontrollable sleep attacks and it affects every aspect of a patient’s life, making it difficult. It is estimated by the Narcolepsy Network that approximately 1 in every 2,000 people in the U.S. is affected by this condition. 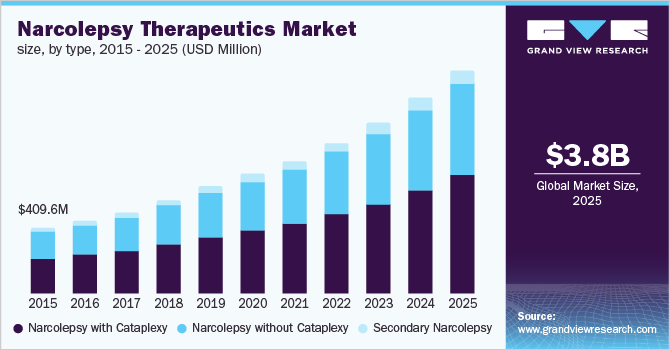 The prevalence in North America is around 0.07%. The incidence of narcoleptic patients without cataplexy is 1.37 per 100,000 people and with cataplexy is 0.74 per 100 people. According to data published by Narcolepsy UK, at least 25,000 people in the UK are suffering from this condition and around 75% of them are untreated as they remain undiagnosed or are misdiagnosed. The increase in cases is indeed alarming.

According to Narcolepsy Network, only 25% of people suffering from the condition are estimated as diagnosed worldwide. This disease is comparatively difficult to diagnose due to low awareness amongst patients & healthcare providers. The favorable reimbursement policies associated with the drugs are further fueling the growth of this vertical.

The market is majorly driven by the growing elderly population with the need for medical attention, increasing occurrences of narcoleptic diseases, changing lifestyles, and the rise in stress levels results in narcolepsy disorder. Furthermore, increased research activities, a rise in spending on healthcare, and the presence of better medical infrastructure is expected to drive the narcolepsy therapeutics industry in the upcoming years.

Circadian delay, high sleep time, and teleworking contribute to reducing the central hypersomnia symptoms. This has substantially impacted the market growth due to the low consumption of narcolepsy therapeutics and pursuance of better sleep conditions in the population. ​On the other hand, high costs and lack of awareness are anticipated to hinder market growth in the future.

Various local, national, and worldwide institutions, and organizations have taken initiative measures to raise useful data about accessible narcolepsy treatment choices to raise awareness about sleep disorders and the existence of therapies associated with narcolepsy. This awareness is anticipated market growth opportunities over the forecast period.

Covid-19 had a substantial impact on market growth because of the decreased uptake of narcolepsy medications during the pandemic. In January 2022, ‘Sleeping through a pandemic: impact of Covid-19-related restrictions on narcolepsy and idiopathic hypersomnia’ was published in the Journal of clinical sleep medicine. It stated that central hypersomnia symptoms were reduced by increased sleep duration, teleworking, and circadian delay (in idiopathic hypersomnia patients). This affected the growth of the narcotic therapeutics industry, as the population's dependence on narcolepsy medicines dropped as a result of having sufficient sleep.

Narcolepsy with cataplexy segment was identified as the largest segment in terms of revenue in 2016, owing to the increasing prevalence of cataplexy as a major symptom in patients. It is expected to retain its position throughout the forecast period. Moreover, cataplexy is the confirming symptom for a conclusive diagnosis of narcolepsy, as observed in some cases. Although it is rarely the first symptom of narcolepsy, almost 75% of narcoleptic patients suffer from it.

Narcolepsy without cataplexy is expected to be the fastest-growing segment. The major factor responsible for the growth of this segment is an increase in public awareness via awareness campaigns conducted by various networks, such as U.S. Narcolepsy Network and Europe Narcolepsy Network.

EDS is majorly the first clinically apparent symptom. According to the National Institute of Neurological Disorders and Stroke, sleep deprivation is the most common cause of EDS in the U.S. Apart from EDS, hallucinations, sleep paralysis, disrupted nocturnal sleep, and obesity are other symptoms observed in this condition. Increasing awareness about the disease and the available treatment options leading to early diagnosis as well as increasing healthcare expenditure are the factors anticipated to drive this segment’s growth over the forecast period.

The market comprises various classes of drugs for the disease management and associated symptoms. Sodium oxybate dominated the overall market in the year 2016. In addition, it is expected to be the fastest growing segment during the forecast period owing to the high cost of this drug, the presence of favorable reimbursement policies, and the rising awareness levels pertaining to diagnosis & associated treatments.

Xyrem is an FDA-approved drug in this category and is specially indicated for use in cataplexy and associated EDS, resulting in high prescription rate of this drug. The American Academy of Sleep Medicine (ASSM) has recommended Xyrem as standard treatment option for EDS and cataplexy related to narcolepsy. 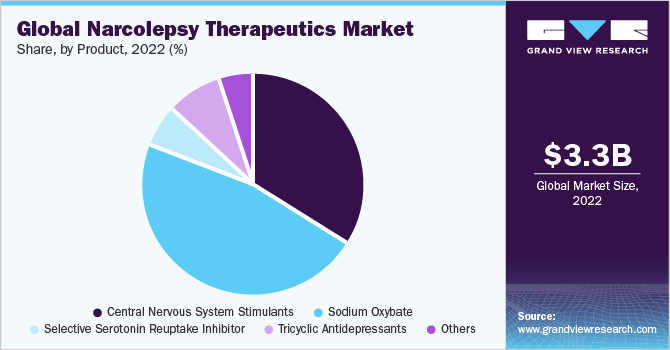 Most of the insurance companies, including Medicare and Medicaid, offer reimbursement for Xyrem. Manufacturers also offer assistance program for patients who do not have insurance coverage and are unable to afford the drug. On the other hand, CNS stimulants are estimated to lose revenue share owing to patent expiration of key drugs such as Provigil and Nuvigil.

Europe dominated the overall market in terms of revenue in the year 2016. A large affected population, well-established healthcare infrastructure, and growing R&D initiatives for the development of novel drugs are the factors that can be attributed to its largest share. In Europe, H1N1 influenza pandemic resulted in the growth of sleep-related disorders in the year 2009. 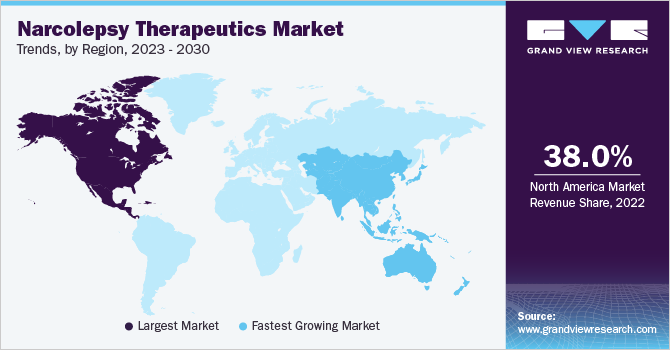 The Asia Pacific on the other hand is expected to register lucrative growth over the forecast period owing to economic development, rising awareness among people, high disposable income, growing investments in pharmaceutical & biotechnology sectors, and supportive government initiatives.

Japan is identified as one of the regions with a high prevalence of narcolepsy amongst Asia Pacific countries. In addition, a flourishing generics industry and improving healthcare facilities are anticipated to result in further market growth in the near future. However, a high number of undiagnosed cases in this region still remains a major concern for the growth of this market.

Some key market players that dominated the global market are Teva Pharmaceutical Industries Ltd.; Jazz Pharmaceuticals PLC; Addrenex Pharmaceuticals, Inc.; Graymark Healthcare, Inc.; and BIOPROJET. These companies are partnering with other players as a part of strategic expansions. In addition, the market players are focused on new product development and launches to capture a considerable revenue share in the coming years. Many players are supporting their consumers via various strategies, such as out-of-pocket co-pays & free products for eligible patients, to increase their market penetration. For instance, Jazz Pharmaceuticals has initiated Patient Assistance Programs for those unable to afford insurance coverage for therapies.

This report forecasts revenue growth at global, regional & country levels and provides an analysis on the industry trends in each of the sub-segments from 2014 to 2025. For the purpose of this study, Grand View Research has segmented the global narcolepsy therapeutics market on the basis of type, product, and region: 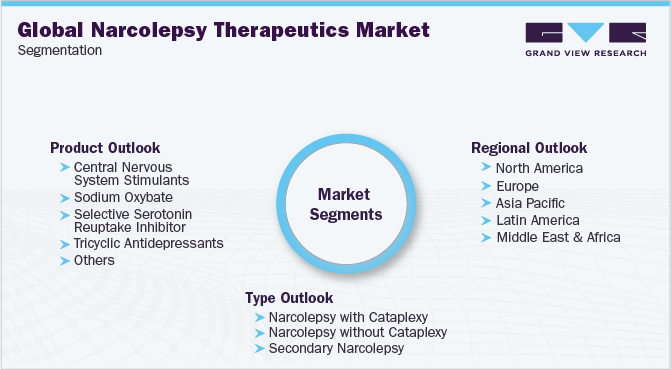