The global nebulizer market size was estimated at USD 926.1 million in 2019 and is anticipated to witness a CAGR of 6.6% over the forecast period. The high growth is attributed to the rising incidence rate of chronic respiratory diseases, increasing demand for home healthcare devices, and rising geriatric population. As per lung.org, in 2018, Chronic Obstructive Pulmonary Disease (COPD) is the leading cause of death in U.S.

Moreover, rising consumption of alcohol, tobacco, ultra-processed products, including sugar-sweetened beverages is a major cause behind the increasing prevalence of respiratory diseases in North America. According to the Centers for Disease Control and Prevention (CDC) data, about 14% of deaths in adults aged 30 to 70 years in North America are caused due to tobacco consumption. Thus, an increase in number of smokers and environmental pollution is anticipated to increase the demand for nebulizers. 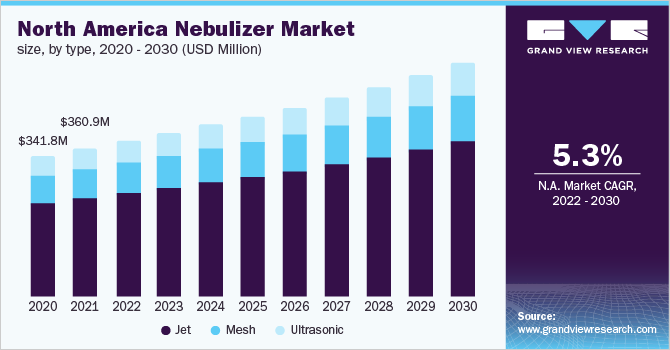 In addition, as per WHO, in 2017, there were around 3.2 million deaths worldwide due to COPD. However, initiatives such as the “Global Alliance against Chronic Respiratory Diseases” are likely to improve diagnosis and treatment rates of respiratory disorders, which may, in turn, boost the market for nebulizers.

The market for a nebulizer and respiratory devices is quite mature with jet dominating the market due to its low cost. Hence, other nebulization devices are expected to experience high competition. Furthermore, it is a challenge for new technology or device to gain momentum in mature markets, particularly with the intricacies of different reimbursement and national regulatory systems that need to be followed for both drugs as well as devices.

Jet nebulizers are expected to account for the largest share in the nebulizer market over the forecast period owing to the low cost of the devices. The mesh nebulizers segment is expected to witness lucrative market growth over the forecast period due to the technological advanced compact size devices and minimized drug loss, thereby improving the effectiveness of the devices.

The market for mesh nebulizers is expected to grow further, majorly due to increased patient acceptance, quick treatment, portability, and convenience. Furthermore, increasing commercial acceptance of mesh nebulizers due to accurate drug delivery to the lung and lower residual volumes also aid in market penetration.

The ultrasonic nebulizers segment is anticipated to have steady growth owing to wider range of benefits such as increased portability, low drug delivery time, low noise generation during operative procedures, and high efficiency as a consequence of incorporation of high frequency wave oscillators. Other benefits associated with these devices include reduced size of drug droplets that lead to increased exposure of drugs to lungs, thereby inducing inclination of physicians toward ultrasonic nebulizers. Various products under this segment offered by the key players are Omron Corporation’s NE-U780 for clinical treatment of asthma, cystic fibrosis, and COPD and Briggs Healthcare’s NebPak Ultrasonic Nebulizer.

Hospitals are expected to account for the largest share in the market over the forecast period owing to favorable reimbursement policies and larger patient footfall. Furthermore, emergency centers are expected to witness lucrative growth owing to the increasing cases of sudden asthmatic attacks. 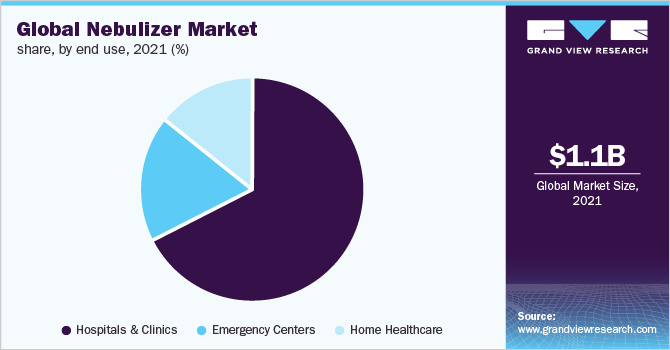 North America commanded over 35.0% share of the market in 2019 owing to growing respiratory disorders and efforts by the government such as favorable reimbursement scenario, rise in customer awareness, and well-established healthcare infrastructure. Furthermore, introduction of technologically advanced devices and favorable reimbursement scenario in this region are expected to fuel market growth in this region.

However, Asia Pacific is expected to be the fastest growing market over the forecast period owing to large geriatric population, increasing focus on preventive care, and government initiatives promoting technological innovations. For instance, according to Japan’s Ministry of Health, Labor and Welfare, in 2017, COPD is the seventh most common cause of death in the country.

A significant increase in the number of application areas, such as postoperative rooms, delivery rooms, and care units, of respiratory devices is expected to increase the demand for technologically advanced devices in Europe. According to WHO data, about 2.9 million people in Europe are suffering from COPD; whereas, as per NCBI, approximately 43,000 people died due to asthma in Europe in 2017.

A large population base in Brazil is affected by pulmonary disorders, such as asthma and COPD, which require nebulizers for management.  Moreover, a study by Rehabilitation Center at Federal University, shows that in most Latin America countries, the prevalence of asthma varied from 2.6% in Guatemala to 33.1% in Peru.

To differentiate their products, form the other market players, companies are adopting strategies such as new product development and collaboration with other players or research institutes. For instance; in October 2018, Pari Pharma gets approval for its e-FLOW technology device LAMIRA, which is the only nebulizer system to deliver amikacin liposome inhalation suspension (ARIKAYCE). Moreover, ARIKAYCE is used for the treatment of mycobacterium avium complex lung disease in adult patients. Furthermore, in Nov 2018, Koninklijke Philips launched InnoSpire Go portable nebulizer in U.S. The product is the smallest and lightest portable handheld nebulizer.

Companies are further involved in creating awareness amongst end-users to gain an edge over the competition. For example, Koninklijke Philips introduced CSR campaign in October 2019, to encourage awareness on childhood pneumonia in India. With this, the company will expand its reach in India and market penetration. The initiatives like these are anticipated to boost the market growth over the forecast period.

This report forecasts revenue growth at global, regional, and country levels, and provides an analysis of the latest industry trends in each of the sub-segments from 2016 to 2027. For the purpose of this study, Grand View Research has segmented the global nebulizer market on the basis of type, end use, and region:

Unusually high demand for mechanical ventilators is resulting in a significant shortage of the same in key countries affected by the Covid-19 outbreak. Biomedical engineers and scientists are using respiratory devices such as nebulizers, manual resuscitators, PAP devices, oxygen concentrators to create makeshift ventilators to meet the heightened demand. This is acting as a pivotal factor for the growth of the nebulizer market in recent times. We at GVR are trying to quantify the impact of this pandemic on the nebulizer market. Get your copy now to gain deeper insights on the same