The global needles market size was valued at USD 5.97 billion in 2017. The market is projected to expand further at a strong CAGR of 6.6% over the forecast period. Increasing geriatric population and demand for vaccines are among the key growth-driving factors. Rising prevalence of various chronic diseases and increasing number of hospitals and clinics in emerging countries are also likely to augment the growth of this market during the forecast period. 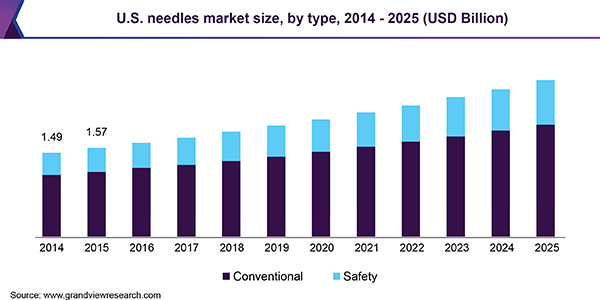 In addition, extensive R&D by major companies across the globe to introduce needle technology with maximum safety and precision is expected to contribute to the market expansion. In January 2017, a research team from the University of Adelaide developed a biopsy needle attached with tiny imaging probe to enable surgeons to evaluate the particular blood vessels at risk as they insert the needle, preventing fatal bleeding. Moreover, the emergence of needle technology focuses on reducing the level of pain and anxiety experienced during injections.

Certain treatment regimens are associated with pain and anxiety where various psychological and physical factors trigger the pain receptors of the brain. For instance, there is a close association of pain and anxiety with dental injection during dental procedures. Furthermore, rising awareness levels regarding blood donation are also projected to fuel market growth in the near future. The gap in blood supply can be offset using voluntary blood donations resulting in higher demand for needles and syringes.

Stringent regulations in many developed regions, such as Europe, have led to mandatory blood screening tests on donations for infections including HIV and HBV. Thus, the use of needles for blood donation and testing has increased significantly in the past few years. According to the Red Cross, there is a high demand for blood and blood products due to rising cases of complex surgeries, such as chemotherapy, heart surgery, and organ transplant, which require a large amount of these products.

Safety needle is expected to be the fastest-growing type segment during the forecast period. This growth can be attributed to reduced risk of needle stick injuries offered by these products as such injuries can result in the transmission of blood borne pathogens, such as HIV and hepatitis B and hepatitis C virus. Healthcare organizations and stakeholders must focus on specific issues that contribute to the ongoing risk of injury in order to better understand issues related to product limitations and hospital environment.

Safety needles reduce the incidence of infection, cost as well as offer better convenience and practicality in use. NMT type of safety syringe activates an automatic retraction technology on pressing the plunger to inject the medication. Single-step activation of the safety mechanism is easy to activate in all models of syringes with safety needles. Factors such as accuracy, operation time, and prompt use design were favorable with the majority of health care personnel preferring safety needle technology as compared to conventional devices.

Based on product, the market is segmented into pen, suture, blood collection, dental, and ophthalmic needles. Pen needles led the market in 2017 due to factors, such as growing prevalence of diabetes. The segment is also expected to witness the fastest growth over the forecast period. Insulin pen needles are available in a variety of lengths and widths. Conventional pen needles were long and sharp; however, due to advanced technology, small, thin, and pain-free needles are commonly available worldwide.

The hypodermic segment led the global needles market in 2017. This growth is attributed to rising cases of chronic diseases, such as diabetes, and advent of needles that are compatible with high-power injectable technology and can withstand high pressure. 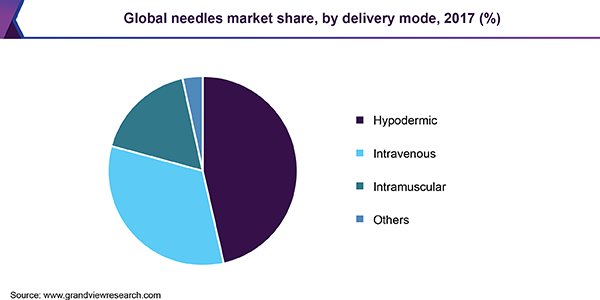 The intravenous segment is expected to witness the fastest growth in the coming years. Intravenous needles are hollow and are attached to IV syringes to inject and extract samples. They reduce contamination while inoculating a sterile substrate. Increasing per capita healthcare expenditure is expected to drive the segment.

Europe led the overall market in terms of revenue share in 2017. Constantly improving healthcare infrastructure in the region is responsible for the market growth. Moreover, growing population is contributing to the market expansion. The Asia Pacific region, on the other hand, is likely to witness the fastest CAGR over the forecast period.

Research institutes and medical device manufacturers are focusing on introducing needles with enhanced drug delivery. In Singapore, a team of researchers collaborated with several institutions within the country and designed an eyepatch with dissolvable needles for treating eye diseases. The 2-layered device has been successfully tested on mice wherein the first layer delivers the first dose within 30 seconds while the second layer offers a sustained release over a period of several days.

This report forecasts revenue growth at global, regional, and country levels and provides an analysis of the latest industry trends in each of the sub-segments from 2014 to 2025. For the purpose of this study, Grand View Research has segmented the global needles market report on the basis of type, product, delivery mode, raw material, and region:

Increased hospital admissions and the demand of consumables in the isolation centres across the globe is impacting the dynamics of these market spaces. With many medical devices' manufacturing centers in China, the supply has been severely disrupted which in turn is affecting the medical supply chain. We are working to account for this surge in our estimates. The report will account for Covid-19 as a key market contributor.