The global pen needles market size was valued at USD 2.7 billion in 2021 and is anticipated to expand at a compound annual growth rate (CAGR) of 12.1% from 2022 to 2030. The growing prevalence of diabetes has led to the rising demand for pen needles. According to the International Diabetes Federation (IDF), 642 million people are estimated to have diabetes by 2040. With the rising diabetic population, the target market is expected to grow continuously during the forecast period. These products are commonly used by diabetic patients for injecting insulin or any other injectable medication. Obese people are highly susceptible to diabetes. 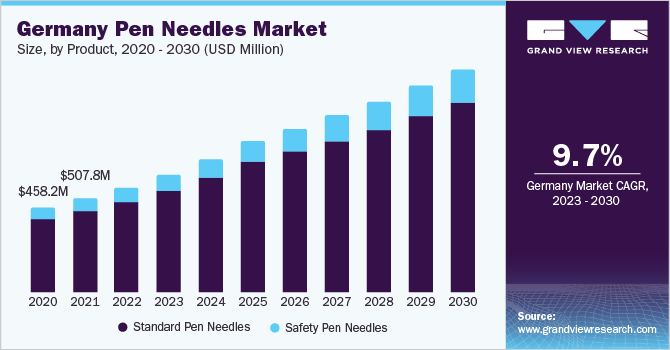 According to Diabetes.co.uk, obesity is assumed to account for 80-85% of the risk of developing diabetes. Insulin pens are the most convenient and fastest mode of injecting drug delivery. Pen needles are highly demanded in conjunction with the growing need for insulin pens for people suffering from diabetes. These devices used with insulin pens help in delivering the dosage of the drug to the patient. Technological advancements in the different types of products are also anticipated to drive the growth of the industry. Companies are focusing on new product development with respect to the needle length.

For instance, Novo Nordisk announced the commercial availability of NovoFine Plus, the shortest and thinnest needle in the U.S. Pen needles of shorter length can be easily used by everyone including overweight patients. Insulin pens coupled with needles are considered an improved alternative drug delivery process in comparison to syringes and vials. Traditional syringes are large and create difficulty in self-administration. However, pen needles have fine pointed tips, which help in easy penetration into the patient’s muscle. These needles also facilitate safety pertaining to insulin delivery amongst diabetic patients.

The standard pen needles segment dominated the global market in 2021 and accounted for the largest share of more than 87.5% of the overall revenue. The growth was attributed to the daily usage of these products for larger dosages by diabetic patients. People suffering from dexterity problems commonly use these needles. However, these needles are not preferred since there is a high risk of causing needlestick injuries, which hampers the safe applicability of pen needles. Hence, they are expected to have low demand in the near future. Standard pen needles are used more in home settings. Lack of proper training on the appropriate usage of these devices leads to improper doses and subsequent complications.

Some examples of these devices include NovoLog FlexPen and Lantus SoloStar. The rising diabetic population and awareness level regarding the usage of insulin pens are some of the factors supporting the growth of this segment. Safety pen needles are expected to showcase a lucrative growth rate during the forecast period as a result of the rising technological advancements in this field. These devices enable the minimization of needlestick injuries amongst patients. The demand for safety pen needles is high in hospital settings as they help in effective injection to bed-ridden patients and in emergency rooms. BD Autoshield Duo Pen Needles, Novofine, and Accu-Fine Pen Needles are some of the major brands for safety needles.

Amongst the various needle lengths, the 8mm-sized pen needles segment dominated the global market in 2021 and accounted for the largest share of more than 20.00% of the overall revenue. These types of needles are most commonly prescribed to all patients including overweight patients suffering from the target disease. Safety, user convenience, and easy disposal are some of the features of 8mm needles, which lead to their preference in home settings. The easy availability and affordability are among the other factors expected to support the segment growth. Owing to their larger size, the needles are easy and safe to dispose of, with minimum chances of needlestick injury. Moreover, these are easy to separate from other sharp waste, and thus, are recommended.

The 4mm-sized needle pens segment is anticipated to register the fastest CAGR during the forecast period on account of the short length of these devices. The shortest and thinnest needles are increasingly being used by patients due to a greater comfort level offered by them as compared to injections. Moreover, their short layer helps reach the subcutaneous tissue of the patients easily. Latest studies have proved that short-length needles have similar efficacy as compared to their counterparts. In addition, these needles are easy to use for patients with trypanophobia complications. The use of 4mm and shorter needles helps in minimizing complications related to intramuscular injection and irregular dosing.

On the basis of therapies, the global market has been segmented into insulin, GLP-1, and growth hormone. The insulin therapy segment dominated the market in 2021 and accounted for the maximum share of more than 85.00% of the overall revenue. The segment is also expected to showcase lucrative growth during the forecast period. This is due to the increasing awareness about the self-administration of insulin among Type 1 and Type 2 diabetes patients. GLP-1 therapy is also expected to exhibit moderate growth in the near future. This is due to its capability to minimize the blood glucose level among patients suffering from type 2 diabetes. GLP-1 therapy is looked at as a better alternative for insulin. Some of these drugs are generally taken on a weekly basis. This reduces the number of injections and increases patient convenience. 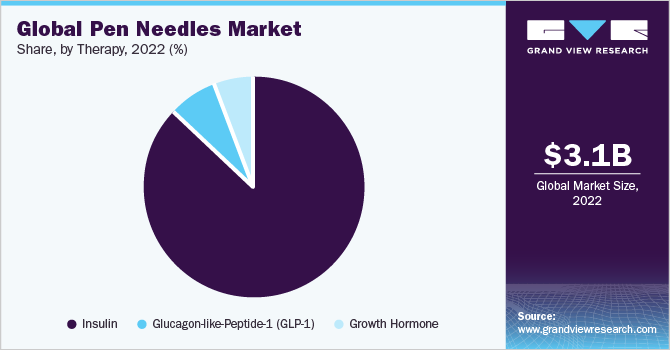 Dulaglutide, Exenatide (extended-release), and Semaglutide are some of the GLP-1 drugs that are taken once weekly. Along with blood sugar control, these help with weight loss, which is of high importance in diabetes patients. Growth hormone therapy includes injection either by traditional syringe-vial combination or injection pens. Owing to the complications and minimal user-friendliness of syringe-vial combination, it is getting rapidly replaced by injection pens. As most growth hormone deficiency patients are children, user acceptance is important in product development. Companies are focusing on pen needle development with minimum pain. Omnitrope is one of the leading brands of injection pens intended for growth hormone deficiency.

In 2021, Europe dominated the global market with a revenue share of around 38.0% on account of the rising prevalence of the target disease in this region. High patient volume and high product prices are the factors contributing to the large market share. Increasing patient awareness and favorable reimbursement scenarios across the region are aiding the adoption of advanced devices. A sedentary lifestyle and rising obesity rates in the region are also expected to fuel the demand. Moreover, the U.K. government is also taking initiatives to invest in diabetes care and research to improve treatment techniques for diabetic patients. The Asia Pacific is projected to witness an attractive growth rate during the forecast period. Prevalence of diabetes and rates of obesity & other lifestyle disorders are rising continuously. 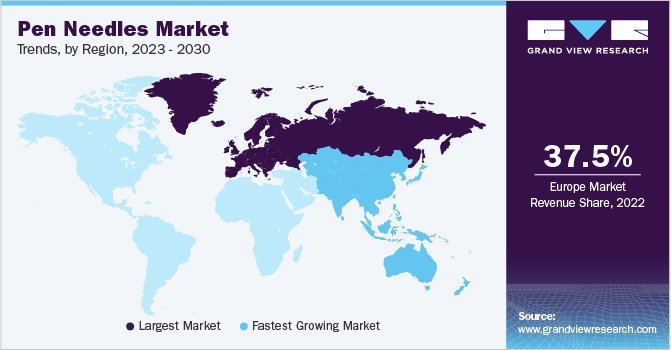 Low awareness levels about advanced products and the unavailability of government-funded reimbursements and insurance are the factors responsible for the limited adoption of the latest pen needles. However, this region represents the highest diabetes population in the world. Major market players are focusing on providing affordable options, which would help boost the adoption of advanced treatment options. Local manufacturing and government support can potentially bring down the final prices. Increasing medical tourism is one of the reasons making this region more attractive to global players. Increasing penetration of international healthcare service provider franchises and private insurance providers is expected to boost the market growth.

The key companies are engaged in new product development through the introduction of improved technology, regional expansion, and mergers & acquisitions to target the unmet needs of diabetic patients. Other initiatives such as new product developments are also being adopted in order to cater to the rising needs of the patients. Some of the key companies operating in the global pen needles market are:

This report forecasts revenue growth at global, regional, and country levels and provides an analysis of the latest industry trends in each of the sub-segments from 2018 to 2030. For the purpose of this study, Grand View Research has segmented the global pen needles market report on the basis of product, needle length, therapy, and region: 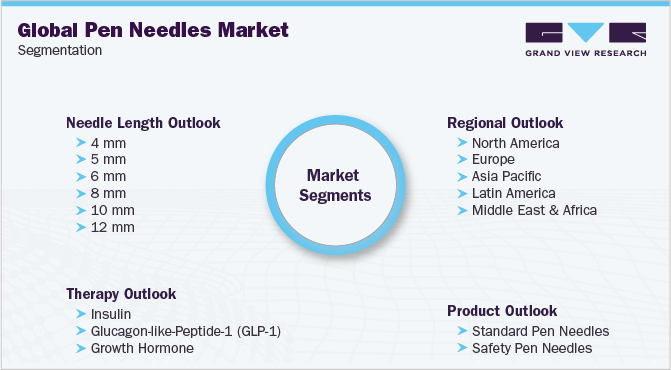 How big is the pen needles market?

What is the pen needles market growth?

Which segment accounted for the largest pen needles market share?

b. Europe dominated the pen needles market with a share of 38.6% in 2021. This is attributable to the rising prevalence of the target disease in this region. Moreover, the U.K. government is also taking initiatives to invest in diabetes care and research in order to improve treatment techniques for diabetic patients.

Who are the key players in pen needles market?

What are the factors driving the pen needles market?

b. Key factors that are driving the pen needles market growth include the growing prevalence of diabetes.