The global neglected tropical disease (NTD) treatment market size was valued at USD 1.2 billion in 2018 and is expected to grow at a CAGR of 5.5% over the forecast period. Formal recognition of NTDs in the Sustainable Development Goals (SDG), a United Nations Development Programme, as a global target is anticipated to fuel the market growth. 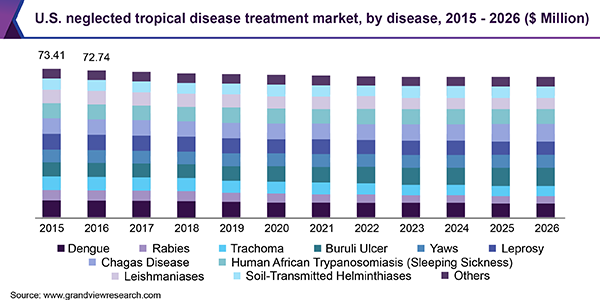 The rise in the number of programs to tackle NTDs is expected to positively impact the market. For instance, in 2000, WHO launched the Global Programme to Eliminate Lymphatic Filariasis (GPELF) with a target of eliminating the disease by 2020. This program aims to prevent the spread of transmission and to alleviate the suffering of those already affected by the disease.

The NTD program has expanded its support to 31 countries in Asia, Latin America, and Africa. Besides, it has provided more than 2.6 billion treatments and leveraged more than USD 22.3 billion in donated medicines.

Dengue held the largest segment share in 2018 owing to its increasing prevalence. According to data published in the WHO, around 390 million dengue infections are observed per year globally.

Furthermore, based on studies published in the Epidemiological Update Dengue by the WHO and Pan American Health Organization, in 2018, 16 countries and territories in America reported an increase in dengue cases nationally in comparison to 2017 cases. Moreover, in the first 6 weeks of 2019, there were around 99,998 dengue cases reported in America which accounts for 10.2 cases per 100,000 population including 28 deaths.

Buruli ulcer is estimated to be the fastest-growing segment over the forecast period owing to the rising awareness of the disease. For instance, the Global Buruli Ulcer Initiative (GBUI), a partnership initiative of WHO, Member states, donors, research & academic institutions, non-governmental organizations, and others, is dedicated to raising awareness of Buruli ulcer.

The initiative aims to obtain commitments from policymakers, governments, and donors for support & development of health systems of endemic countries and research and control to improve access to early diagnosis and treatment.

Based on product type, the market is segmented into drugs and vaccines. In 2018, drugs were anticipated to be the largest product type segment owing to its cost-effectiveness and patient compliance, especially for oral drug formulations.

Vaccines were estimated to witness the fastest growth over the forecast period due to the presence of pipeline products. For instance, Takeda Pharmaceutical Company Limited is developing a vaccine for dengue, TAK-003 which is currently under phase III clinical trials. The clinical development program consists of 5 phase III trials which include DEN-304, DEN-305, DEN-314, DEN-301, and DEN-315. 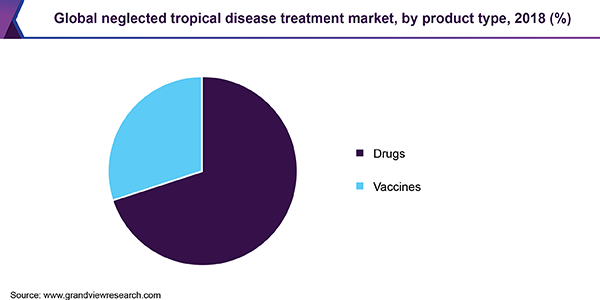 Besides, Merck & Co. Inc., is developing a vaccine for dengue, V180, which is currently under Phase I clinical trial in the U.S. & Australia and is likely to target dengue-endemic Latin America and the Asia Pacific regions.

NTDs are endemic to around 150 countries and have affected people across the globe. The Asia Pacific dominated the neglected tropical disease treatment market in 2018 and is expected to contribute around 31% of the revenue share. High prevalence of NTDs in the region, continuous increase in the GDP rate, and the presence of a huge target population are anticipated to support the market growth.

However, over the forecast period, Latin America is anticipated to witness the fastest growth. Rising awareness and untapped potential for the treatment of patients with NTDs in Latin American countries regarding ways of tackling NTDs are expected to accelerate the growth of this regional market.

MEA held the second-largest regional share in 2018 owing to the increasing burden of neglected tropical diseases in this region. According to the statistics published in the Uniting to Combat NTDs in 2017, more than 600 million people are affected by NTDs in Africa.

New product development, collaborations, and partnerships are some of the common strategies adopted by key players in the market. For instance, Eisai Co. Ltd. is developing E1224 (Fosravuconazole) for the treatment of Chagas disease and is currently under phase II clinical trial.

This report forecasts revenue growth at global, regional & country levels and provides an analysis of the industry trends in each of the sub-segments from 2015 to 2026. For this study, Grand View Research has segmented the global neglected tropical disease treatment market based on disease, product type, and region: