The global neonatal critical care equipment market size was valued at USD 649.7 million in 2021 and is expected to witness a compound annual growth rate (CAGR) of 8.70% from 2022 to 2030. The high prevalence of neonatal jaundice, an increasing number of preterm births, and the introduction of new products for use in the Neonatal Intensive Care Units (NICU) are expected to drive the market. The World Health Organization (WHO) estimates that over 15 million infants are born prematurely each year, with about 1 million dying as a result of preterm problems. Newborn monitoring is one of the most challenging responsibilities. Developing better devices has remained significant in managing neonatal health issues. Manufacturers are making significant investments to keep up with the increasing demand for neonatal critical care equipment, particularly thermoregulation devices. 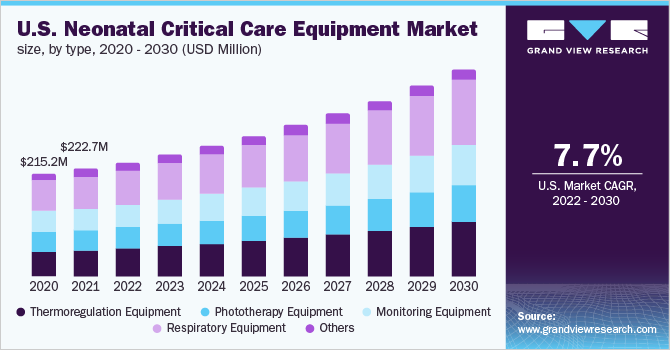 Globally, the neonatal critical care equipment market is characterized by a high rate of newborn jaundice. According to the National Center for Biotechnology Information, around 55.2% of newborns involved in the research suffered jaundice in 2018. Additionally, jaundice, or hyperbilirubinemia, occurs in roughly 60.0% of full-term infants (and 80% of preterm infants) within the first week of life, according to The Royal Children's Hospital Melbourne, Australia. As phototherapy equipment is employed as an effective treatment against neonatal jaundice, its increasing cases have a positive impact on the market.

When a baby is born before completing the 37 weeks of pregnancy, it is called a preterm birth and is admitted to the NICU. As per the March of Dimes, a U.S. non-profit organization, among the total NICU admissions more than half comprised preterm babies. According to the Centers for Disease Control and Prevention (CDC), in 2020, 1 out of every 10 infants was born prematurely. This results in increased NICU admission and a rise in the requirement for NICU facilities.

Public and private organizations are taking initiative to increase the availability of the NICUs to cope with the requirement. For instance, in September 2017, BC Children's Hospital, Vancouver, announced to launch of Teck Acute Care Centre and claimed to have North America’s first NICU to provide critical care to mothers and infants in the same room.

Monitoring devices are one of the important newborn care equipment in the NICU infrastructure. Hence key manufacturers are conducting research and development to launch innovative monitoring devices for use in the NICUs. For instance, in June 2019, Masimo received the  U.S. Food and Drug Administration (FDA) approval for the use of its O3 Regional Oximetry on neonatal patients.

Based on type, the respiratory equipment segment dominated the market with a share of 29.5% in 2021. The growth of the segment is characterized by an increase in respiratory disorders requiring NICU admissions and the launch of new products. For instance, in September 2018, the Augmented Infant Resuscitator (AIR) was launched by Koninklijke Philips N.V to aid in the resuscitation of the asphyxiated newborn babies. The product is developed by Philips by the Consortium for Affordable Medical Technologies (CAMTech), Massachusetts.

Moreover, infants in respiratory distress are provided with ambu-bag support or oxygen therapy during transportation to a NICU facility, which does not fulfill the clinical requirements of infants, leading to patient death in many cases. Hence, in April 2019, a portable neonatal Continuous Positive Airway Pressure therapy (CPAP) system was developed by Coeo Labs in collaboration with doctors of the Consortium of Affordable Medical Technologies (CAMTech), from the U.S. and Uganda. The portable CPAP intends to provide respiratory support to neonates with Respiratory Distress Syndrome (RDS) during transportation.

On the other hand, the thermoregulation equipment segment is projected to exhibit maximum growth of 9.79% compound annual growth rate (CAGR) during the forecast period. Thermoregulation devices include newborns incubators, newborn cooling systems, radiant warmers, and others.

To keep their body temperatures steady, neonates with cold stress or hypothermia require a thermostable environment. Hypothermia is a leading cause of infant illness and mortality, according to the World Health Organization. Thus, the increased frequency of hypothermia has surged demand for thermoregulation devices.

North America dominated the market with a share of 39.6% in the year 2021 owing to a huge demand for technologically advanced products ensuring better healthcare delivery for newborns. The value-based healthcare model has led to the development of well-equipped NICU centers along with an increasing number of approvals for newborn care devices from the FDA. Furthermore, the launch and approval of advanced, next-generation devices in the U.S. & Canada are likely to boost the market. 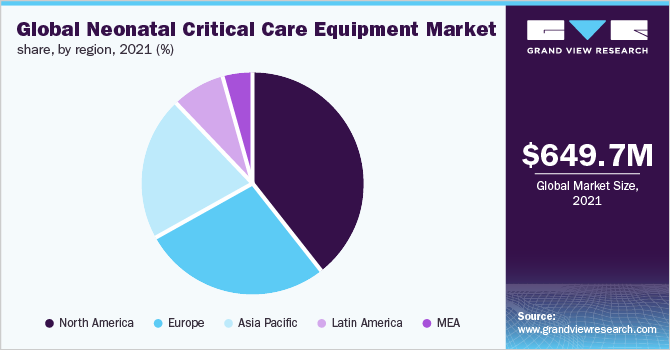 On the other hand, Asia Pacific is expected to witness remarkable growth at a 7.87 % CAGR during the forecast period. This can be attributed to the high number of new births along with an increase in healthcare expenditure in the region. In addition, increasing government initiatives in developing countries such as India is favoring the growth of the market in the Asia Pacific.

The market is characterized by the increase in NICU facilities and research and development leading to the launch of new products. According to the American Hospital Association, there were around 53,096 NICUs in overall U.S. community hospitals. Also, medical service providers are adopting the use of advanced products to improve patient comfort. In May 2019, the NICU at St Peter’s Hospital announced the arrival of a transport incubator system which is used for transport while admitting the babies to a NICU and post-discharge. Some of the prominent players in the global neonatal critical care equipment market include:

This report forecasts revenue growth at the global, regional, and country levels and provides an analysis of the latest industry trends and opportunities in each of the sub-segments from 2016 to 2030. For this study, Grand View Research has segmented the global neonatal critical care equipment market based on type and region:

How big is the neonatal critical care equipment market?

What is the neonatal critical care equipment market growth?

b. North America dominated the neonatal critical care equipment market with a share of around 39.6% in 2021. This is attributable to a huge demand for technologically advanced products ensuring better healthcare delivery for neonates and high adoption of the value-based healthcare model.

Who are the key players in the neonatal critical care equipment market?

What are the factors driving the neonatal critical care equipment market?

b. Key factors driving the neonatal critical care equipment market growth include growth in the incidence of neonatal jaundice, an increasing number of preterm births, and the introduction of innovative equipment for use in the neonatal intensive care units (NICU).