The global neurorehabilitation devices market accounted for USD 1.60 billion in 2019 and is expected to grow at a CAGR of over 15.9% during the forecast period. The rising prevalence of neurological disorders such as stroke, multiple sclerosis, cerebral palsy, brain injuries, etc. has led to an increasing number of patients suffering from movement disabilities. This treatment option is a progressive process that renders functional restoration in patients suffering from movement disabilities. The primary aim of these services is to provide patients with an optimum environment to perform their daily activities at ease. 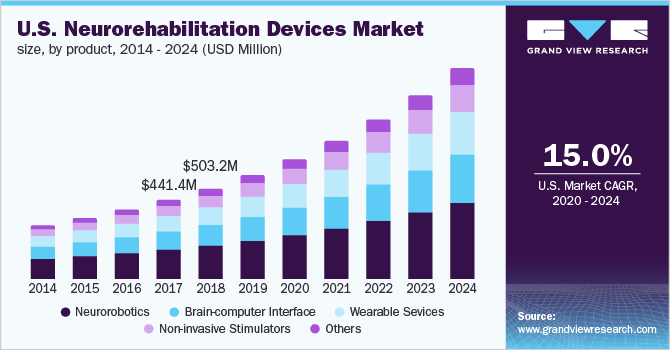 The major factors contributing to the growth of this industry are increasing incidences of neurological disorders, increasing awareness among the care providers and patients, and an upsurge in the target patient population (majorly elderly people) across the world. The growth in the geriatric population worldwide has resulted in an increased prevalence of age-related neurological disorders, thereby resulting in an increasing prevalence of movement disabilities. This in turn would lead to increased demand for the appropriate and efficient neuro-rehab devices and services.

Some neurological conditions do not possess treatments to date or they cannot be cured completely. In such cases, neurorehabilitation comes to the complete rescue of the patients thereby facilitating them to carry out daily chores. These services have undergone tremendous changes in recent years due to the incorporation of several technological sophistication thereby rendering enhanced performance and efficiency with the help of computer and electronic robotic devices.

Estimates published by the WHO suggest that population of age group 65 years and above is expected to grow from 7% in 2000 to 16% in 2050. The data published by United Nations in 2012 states that aging population will reach nearly 1.13 billion by 2022. Due to reducing immunity levels, geriatric population is more prone to the age-related neurological conditions, such as Parkinson’s disease. Therefore, over the forecast period, the increasing global base of aging population will drive the growth of neurorehabilitation devices market. In Asian countries such as Japan, China, and India, increasing aging population coupled with large untapped opportunities is anticipated to increase need for neurorehabilitation devices.

Neurorehabilitation has undergone tremendous change in the recent yearsdue to adoption of computer-aided and electronic robotic devices. These devices help in improving patient response to the rehabilitation treatments. The market has immense growth potential due to rising incidence and prevalence of neurological disorders.

Immobility is the most common effect of neurological conditions. According to American Stroke Association, stroke is 5th cause of death in the US and the leading cause of disability. Around 2.5 million people are suffering from multiple sclerosis, whereas 10 million are suffering from Parkinson’s disease worldwide. Spinal cord injuries can also affect the nervous system, leading to disability, which depends on the injury. According to WHO, between 250,000 and 500,000 people suffer a spinal cord injury every year.

The current treatment cost pertaining to neurorehabilitation is high. Developed countries such as the US, Canada, and the UK are adopting newer treatments at a fast rate, due to technological advancements and higher disposable income. On the other hand, developing countries such as China, India, and Brazil are lacking technologically. There is deficit in capital required to employ high-end rehabilitation treatments due to lower disposable income.

Neurorobotics combines robotics, neurosciences, and machine learning to form a connecting link between robotic devices and realistic biologic simulations of the brain. Neurorobotics systems work on the principles of the central nervous system. The recent development in this field in the form of exoskeletons and prosthetics is acting as a major driver for neurorobotics. The exoskeletons provide body support to physically disabled and traumatized patients. Bioness, Inc. Saebo, Inc., and Hocoma AG are some of the key manufacturers of exoskeletons and prosthetics. These systems are expected to generate large revenues owing to high availability coupled with increasing investments by the manufacturers to develop novel systems and platforms.

Stroke causes the death of brain cells by interrupting the blood and nutrient supply. Strokes can result in different consequences including motion impairment, sensory impairment, cognitive impairment, and visual impairment. Among these, the most common deficit associated with stroke is motion impairment. In most cases, one side of the patient’s body is affected leading to physical disability. Stroke was the second global cause of death in 2013 across the world and the leading cause of disability. People suffering from lifestyle diseases and an aging population are more prone to this condition. Owing to the high incidence and prevalence in conjunction with the leading cause of movement disabilities render the largest market. 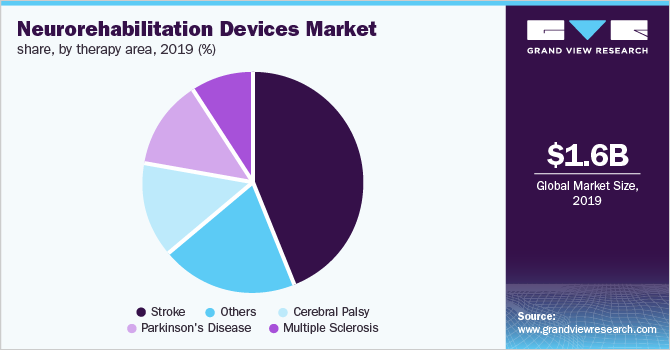 North America is the largest regional segment for neurorehabilitation devices. The North American market will reach 1.3 billion in 2024. The drivers for the growth of this market are the increasing incidence rate of neurological diseases, the increasing geriatric population, and sophisticated and equipped healthcare infrastructure in comparison with the other regions. The US and Canada are the major contributors to the North American neurorehab devices market. More than 130,000 people die each year in the US due to stroke and it is the leading cause of disability. Also, more than 400,000 Canadians are suffering from long-term stroke disability.

The majority of the key players such as Bioness, Inc., Ekso Bionics Holdings, Inc., Medtronic PLC (US), Bionik Laboratories, Kinova Robotics, and NINET (Canada) are established in North America. The adoption rate for these treatments is expected to witness growth in North America, as the treatments are covered under the medical insurance plans as well as the average out-of-pocket expenses are high in this region. 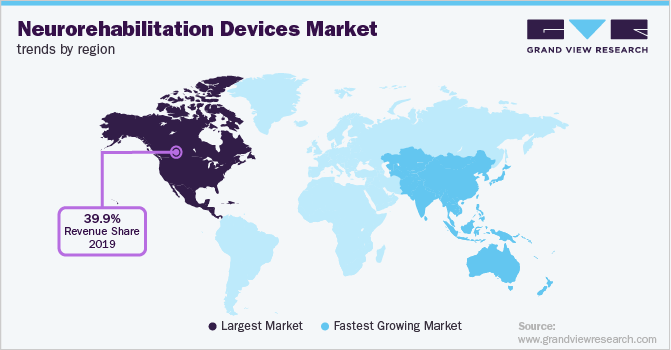 Asia Pacific market is likely to witness more growth opportunities. This market is estimated to grow at the highest CAGR of around 16% during the forecast period. Although there are no monopolized key players at present, however, increasing the patient base with neurological disorders and improving healthcare infrastructure will create a wide scope for the companies to enter this lucrative market. Furthermore, one of the major growth factors for the Asian market is the rising awareness coupled with constantly improving healthcare infrastructure. Owing to the promising market potential, companies are taking up strategic initiatives to expand their operations in this region. For instance, Switzerland-based Hocoma AG has entered the Indian market by associating with Apollo Hospitals to provide neurorehabilitation services to the patient base in India.

Some of the key market players are Bioness, Inc., Ectron Ltd., Hocoma AG, Medtronic, and Tyromotion. Collaborations for novel product development and strengthening of distribution networks constitute some of the strategic initiatives implemented by key players. For instance, Ectron Ltd. has collaborated with Bioness, Inc. and Tyromotion for distribution of their products across different geographical regions.

This report forecasts revenue growth at the global, regional, and country levels and provides an analysis of the latest industry trends in each of the sub-segments from 2013 to 2024. For the purpose of this study, Grand View Research has segmented the global neurorehabilitation devices market report based on products, therapy area, and region: 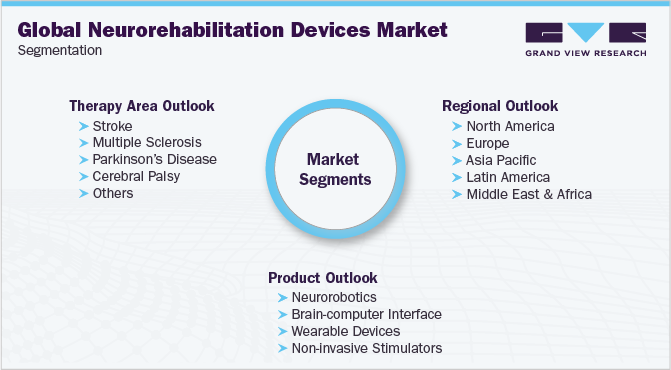