The global neurostimulation devices market size was valued at USD 4.99 billion in 2018 and is anticipated to witness a CAGR of 12.5% during the forecast period. Neuromodulation is a process that makes use of an implantable medical device to modulate and alter neural activities for therapeutic purposes. Equipment that is used for neuromodulation is called as neurostimulators or neurostimulation. Neurostimulators help in the treatment of neurologic disorders that aid in the delivery of electrical stimulation to the intended parts of the patient’s brain, peripheral nervous system, and spinal cord.

These are particularly used for the treatment of various diseases, such as movement disorders, epilepsy, Parkinson’s disease, chronic pain, and depression. Some of the key factors driving the neurostimulation devices market include the growing geriatric population, the introduction of technologically advanced products, escalating product demand as add-on therapy, and increasing incidence of chronic diseases, such as migraine and epilepsy, and the presence of highly unmet medical needs in these disease segments. 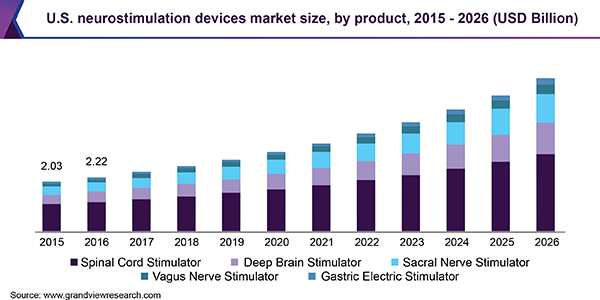 Also, the rising prevalence of neurological disorders and lifestyle-related disorders, external funding for R&D, and demand for minimally invasive surgeries are other factors propelling the market growth. According to the American Academy of Neurology, stroke is ranked as the third leading cause of death in the U.S., with Alzheimer’s being ranked as the sixth leading cause of death. Statistics from the same source indicate that Parkinson’s affects nearly 1 million Americans annually with at least a minimum of 60,000 new cases that are reported annually.

Based on application, the neurostimulation devices market is segmented into pain management, epilepsy, essential tremors, urinary and fecal incontinence, depression, dystonia, gastroparesis, Parkinson’s disease, and others. Pain management led the market in 2018. High prevalence of chronic pain disorders and growing product usage for pain management on account of their high therapeutic value are the key factors driving the segment. The segment is expected to register the fastest CAGR during the forecast period. Some of the diseases encompassed under this segment include chronic pain, disk surgery pain, and leg pain. Epilepsy is a seizure causing neurological disorder and affects approximately 50 million people across the globe according to the World Health Organization (WHO).

High product efficacy exhibited in treating epilepsy coupled with the availability of limited treatment options for the disease is expected to impel market growth during the forecast period. Essential tremors are characterized by severe involuntary limb movement. The disease also affects the neck, jaw, and other body parts. Growing global geriatric population is one of the highest impact rendering drivers for essential tremors. Rising cases of depression are also likely to contribute to the market development as neurostimulation equipment provides easy treatment by activating or inhibiting electrical brain signals.

Based on product type, the neurostimulation devices market is divided into deep brain, gastric enteric, spinal cord, sacral nerve, and vagus nerve stimulators. Spinal cord segment led the market in 2018, in terms of revenue share, owing to the wide scope of product application and high market penetration of commercially available products in this segment. Technological advancements in this segment are expected to fuel the growth further. Spinal cord stimulators are used in non-malignant chronic neuropathic pain management as they help mask the pain by producing tiny nerve impulses without making any anatomical changes to the target area. 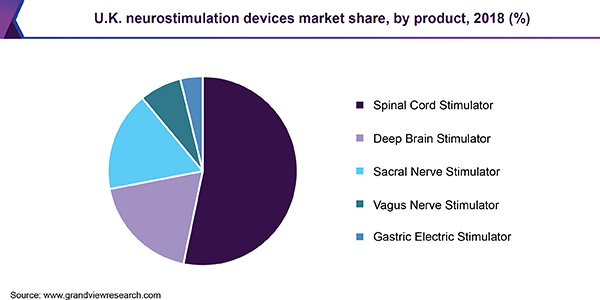 Deep brain stimulators are used in the treatment of several neurological disorders, especially Parkinson’s disease. These equipment are based on a nascent technology and thus are currently undergoing an experimental phase. The use of these devices for diseases, such as Alzheimer’s, Tourette syndrome, refractory epilepsy, cluster headache, trigeminal neuralgia, and movement disorders by multiple sclerosis, is awaiting FDA approval.

Sacral nerve stimulators, used in the treatment of chronic diseases including urinary incontinence and fecal incontinence, are expected to witness the fastest CAGR from 2019 to 2026. Increasing awareness regarding these devices is expected to be the major driver for this segment. However, risks associated with the implantation of these devices, such as mechanical failures and post-surgery pains and infections, may hinder segment growth to some extent.

North America accounted for the largest revenue share in the past and is projected to maintain dominance during the forecast years. However, strict government regulations and a rise in the average number of days required in the FDA approval process may hamper the region’s growth. Europe followed North America, in terms of revenue share. Rapid economic development in Eastern European countries is expected to accelerate this growth further. Moreover, since obtaining a CE approval is easier than obtaining FDA approval, the production penetration is relatively higher in the region.

Also, the growing geriatric population in the region is likely to boost growth. Asia Pacific is expected to witness the maximum CAGR from 2019 to 2026 as several international manufacturers are shifting their production base in this region due to the presence of unmet medical needs and untapped growth opportunities. Furthermore, economic development in emerging countries like India and China and rising healthcare expenditures are estimated to augment the market development in the region.

Some of the key companies in the market are Medtronic PLC; Cyberonics; Boston Scientific Corporation; St. Jude Medical, Inc.; and Nevro Corporation. Manufacturers are focusing more on R&D to develop novel products and technologies. Regional expansion and M&A are the key strategic initiatives followed by these companies to gain a competitive advantage. In April 2017, Boston Scientific announced that the first patient was successfully implanted in the PRISM (Precision Implantable Stimulator for Migraine) clinical study.

This report forecasts revenue and volume growth at global, regional, and country levels and provides an analysis of the latest industry trends in each of the sub-segments from 2015 to 2026. For this study, Grand View Research has segmented the global neurostimulation devices market report based on product, application, and region: