The global neurovascular catheters market size was valued at USD 2.7 billion in 2019 and is anticipated to expand at a CAGR of 6.7% over the forecast period. Increasing prevalence of neurological conditions, such as stroke and brain aneurysm, and rising demand for minimally invasive neurosurgical procedures are expected to drive the market for neurovascular catheters.

Strokes or hemorrhage are the results of damaged, blocked or injured blood vessels, which can cause bleeding or circulation problems in the brain. Open or minimally invasive surgical techniques are used for the treatment of the blocked blood vessels of the brain. Minimally invasive endovascular surgery techniques are preferred for the repair of an infrarenal abdominal aortic aneurysm. Microcatheters, coupled with the other advanced techniques, are preferred for the treatment of various neurovascular conditions, such as aneurysms, stroke, and other blood vessel conditions. 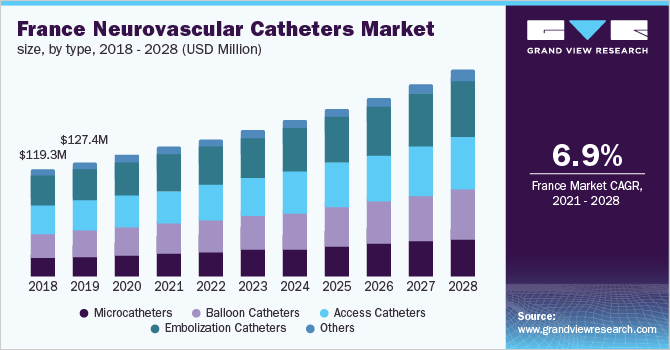 Moreover, minimally invasive neurovascular surgeries involve fewer interruptions of muscles and tendons, making the procedure more natural and easier. Minimally invasive techniques are used in the treatment of various neurovascular conditions, such as acute ischemic stroke, intracranial aneurysms, vascular malformations, and intracranial vascular stenosis. In these cases, wound closure is easier and simpler as well as the healing time is less as compared to traditional, open surgery.

Additionally, growing concerns over more aesthetic and natural appearance among all age groups as well as less amount of blood loss during minimally invasive surgeries are expected to fuel the demand for neurovascular catheters. Such procedures will further help lower trauma and facilitate quicker recovery than invasive procedures. Thus, increasing demand for minimally invasive procedures is expected to drive the market for neurovascular catheters.

Increasing awareness about neurological conditions, such as stroke, hemorrhage, and brain aneurysm, boosts the demand for neurovascular catheters. As per the Brain Aneurysm Foundation, almost 500,000 people die due to brain aneurysm every year. Whereas, in the U.S., 30,000 people suffer from brain aneurysm every year. In addition, the federal government of the U.S spends 83 cents per year on brain aneurysm research for each person affected. At present, several initiatives and programs have been launched by the governments of various countries to improve public awareness and treatment related to neurological conditions, such as ischemic stroke.

Furthermore, the U.S. government has implemented a smoking cessation policy, which indirectly aims at countering the incidence of stroke. Initiatives such as the Family Smoking Prevention and Tobacco Control Act give FDA the power to control the manufacture, marketing, and use of tobacco products. Moreover, the American Stroke Association is actively involved in the prevention and treatment of stroke and other neurovascular disorders. These initiatives are expected to positively impact the growth of the market for neurovascular catheters.

In addition, favorable government initiatives such as those undertaken by the Department of Health and Human Services in the U.S. to control the incidence of stroke are anticipated to provide growth opportunities for the market. The program involves initiatives undertaken to limit disorders causing stroke and improve the overall health of the people. Growing awareness among people and government initiatives to prevent the incidence rate of stroke is likely to boost the market growth.

The microcatheters segment is expected to expand at the highest CAGR during the forecast period. Increasing number of neurosurgical procedures and the introduction of technologically advanced microcatheters by the key players, such as Medtronic, Stryker, and Terumo Corporation, are expected to drive these neurovascular catheters. Furthermore, microcatheters can be used for navigating the vast network of small veins that helps the surgeons to reach the tumor or clots even in the small veins, which is not accessible through other neurovascular catheters.

The others segment is expected to expand at the highest CAGR during the forecast period. An increasing number of patients suffering from various neurovascular conditions, such as atherosclerosis and intracranial artery stenosis, government initiatives, and an increase in the R&D investment are a few factors contributing to the segment growth.

Based on end use, hospitals dominated the market for neurovascular catheters in 2019. Government funding, availability of advanced products, and the presence of skilled neurosurgeons are some of the key factors driving the segment. In addition, increasing number of hospitals worldwide and improvement in the healthcare infrastructure in the developing countries are boosting the segment growth. 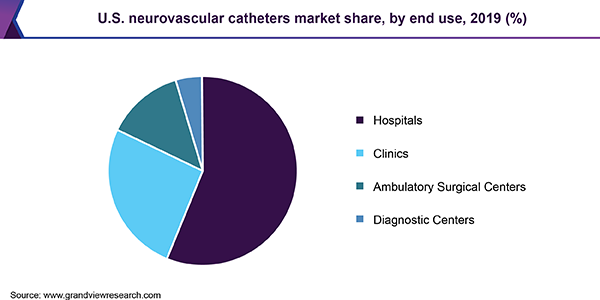 North America dominated the market for neurovascular catheters owing to government initiatives and increasing demand for minimally invasive surgical procedures. Furthermore, a surge in the prevalence of neurological conditions, such as brain aneurysm and stroke, and increasing disposable income are contributing to the market growth in the region.

Asia Pacific is expected to expand at the highest CAGR during the forecast period due to factors such as unhealthy lifestyle, growing aging population, increasing incidence of hypertension, improvement in the quality of diagnosis, and increasing government spending on healthcare. Moreover, the presence of high growth opportunities in developing countries, such as Japan, India, and China, due to the rising geriatric population and increasing prevalence of various neurovascular conditions, like an aneurysm, is likely to contribute to the regional market growth.

For instance, in 2019, Medtronic announced the launch of Solitaire X revascularization device in the U.S. for the treatment of patients suffering from acute ischemic stroke. Additionally, the company has launched Phenom 21 Catheter, (160cm microcatheter) for the delivery of all sizes of Solitaire X. Now, this neurovascular catheter eliminates blood clots from obstructed vessels in the brain to restore blood flow in patients with large vessel occlusion. These advancements are anticipated to drive the market for neurovascular catheters over the forecast period.

This report forecasts revenue growth at the global, regional, and country levels and provides an analysis on the latest industry trends and opportunities in each of the sub-segments from 2016 to 2027. For the purpose of this study, Grand View Research has segmented the global neurovascular catheters market report on the basis of type, application, end use, and region:

How big is the neurovascular catheter market?

What is the neurovascular catheter market growth?

Which segment accounted for the largest neurovascular catheter market share?

b. North America dominated the neurovascular catheter market with a share of 33.7% in 2019. This is attributable to the increasing government initiatives, rising demand for minimally invasive surgical procedures and technological advancement by the key market players in the region.

Who are the key players in neurovascular catheter market?

What are the factors driving the neurovascular catheter market?

b. Key factors that are driving the market growth include increasing prevalence of neurological conditions such as brain aneurysm and stroke, adoption of unhealthy lifestyle, increasing disposable income and new product launch by the key market players.