The global neurovascular devices market size was valued at USD 2.68 billion in 2021 and is anticipated to expand at a CAGR of 6.0% in the forecast period. The increasing prevalence of neurological disorders, technological advancements, and increasing demand for minimally invasive procedures are expected to drive the market. Interventional neurology devices are used for the diagnosis and treatment of vascular disease of the brain and central nervous system. Interventional neurology includes endovascular, catheter-based techniques, angiography, and fluoroscopy. Catheter angiography is one of the oldest primaries in-vivo brain vascular imaging modalities used for the diagnosis of several neurological conditions such as cerebral aneurysm, arteriovenous malformations, and intracranial stenosis, arteriovenous fistula, and vasculitis. 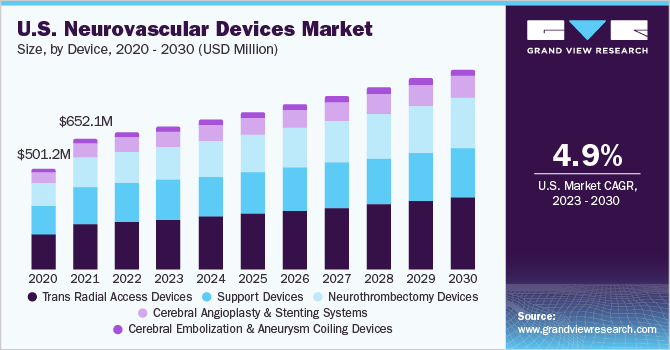 COVID-19 is expected to have a short-term and moderate impact on the market. The impact of the outbreak on the market varies per country, depending on the local state of health systems and the actions taken to combat the pandemic. Neurocare and neurosurgeons have been adversely impacted by the pandemic. To reduce the spread of the coronavirus, brain surgeries have frequently been postponed or even canceled during this timeframe.

In worst-affected nations, such as the U.S., Russia, India, Brazil, France, the U.K., Italy, and Spain, neurosurgical operations fell by 55%. However, according to a research study “COVID-19 and stroke: A review” published in Elsevier journal (International Hemorrhagic Stroke Association) (Jan 2021), up to 36% of hospitalized COVID-19 patients might exhibit neurological symptoms and there were several cases related to ischemic & hemorrhagic infarction.

A case study published in the Journal of Neurology, Neurosurgery & Psychiatry (BMJ Publishing Group Ltd.) has projected a possible link between COVID-19 infection and acute necrotizing encephalitis. These findings also suggest that COVID-19 might enhance sales in the neurology industry, especially for catheters. Thus, these factors are expected to create lucrative opportunities for the market to grow in the near future, providing profitable opportunities for key players post COVID-19.

An increase in incidence of neurological disorders such as brain/ cerebral aneurysm, strokes, and epilepsy among many others in several countries is expected to drive the market growth. According to the NHS England, around 1 in 12,500 people in England have ruptured brain aneurysm every year. Furthermore, around 3% of adults in the U.K. have a cerebral aneurysm. Increasing prevalence of hypertension, alcohol consumption, and smoking results in brain aneurysm.

According to the Brain Aneurysm Foundation, an estimated 6 million Americans are affected by cerebral aneurysms each year. Every year, the disease kills half a million people globally. Approximately 40% of ruptures result in death, and approximately 66% of those who survive have some permanent brain damage. Thus, the vast and rapidly growing patient population base for target diseases across the key markets is primarily responsible for the significant volume consumption of neurovascular devices, leading to market growth.

A slew of potential new technologies for the neurointerventional field are on the horizon. For instance, in Oct 2020, BENDIT Technologies, leader in the development of steerable microcatheters, announced the successful results of the BENDIT neuro microcatheter, in Sheba Medical Center, Israel. Also, Replicator by Mentice is the latest neurovascular-specialized flow system that generates an extraordinarily realistic hemodynamic environment for the application of medical devices. This technology is explicitly suitable for neurovascular devices for the treatment of aneurysm and strokes.

The innovative technologies will continue to broaden the range of neuroendovascular tools available for treating a wide range of aneurysm types with greater safety and efficacy. It is fair to say that intracranial aneurysm management is constantly evolving, with sophisticated technology at the forefront of innovation. Thereby, the availability of new treatment options will significantly increase demand for neurovascular devices in the years ahead.

Stroke is the most common cause of death, followed by heart and cancer diseases worldwide. For instance, according to CDC, in 2018, 15.2 million deaths of the 56.9 million deaths worldwide were due to stroke. Acute Ischemic Stroke (AIS) is the most common form of stroke, caused due to reduced blood supply to the brain, making brain cells to die. For instance, according to the U.S. CDC, 87.0% of strokes are classified as ischemic strokes, with the U.S. being the most affected country.

According to the Southwestern Medical Center, about 795,000 people in the U.S. suffer from a stroke every year. Furthermore, according to the National Center for Biotechnology Information (NCBI), strokes occur more commonly in women than men, especially in elderly population (aged 55 to 65). Therefore, such high prevalence of acute ischemic stroke is anticipated to boost the market growth over the forecast period.

There are various other technologies used in the development of neurothrombectomy devices for the treatment of AIS and its associated symptoms. For instance, in April 2019, Medtronic announced the launch of its fourth-generation Solitaire X revascularization device, which is designed for the treatment of AIS. Furthermore, In May 2019, Vesalio received CE mark approval for NeVa—an advanced neurothrombectomy device, featuring an optimized delivery system for efficient results. These devices expand on Drop Zone and Smart Maker technologies, introducing features such as distal filter.

In August 2020, an Israel based company, Rapid Medical, has been granted European regulatory clearance to launch and commercialize its ‘TIGERTRIEVER XL device for removing large ischemic stroke-causing clots from intracranial vessels. Thus, the introduction of technologically advanced products and rapid product approval process are factors expected to fuel market growth.

In 2021, stroke segment dominated the market with the highest CAGR of 6.2% owing to the factors such as increasing prevalence of stroke, hypertension, and other neurological disorders. According to the CDC, 1 in 6 people worldwide will have a stroke in their lifetime and every year, more than 795,000 people in the United States have a stroke. Strokes are the second leading cause of death globally, and account for an approximate 140,000 deaths in the United States annually.

Increasing government and NGOs awareness initiatives worldwide, is further adding to the segment growth. For instance, in 2018, the Stroke Alliance for Europe (SAFE) with member from 12 countries, a non-profit organization joined Boehringer’s Ineglheim’s (BI) Angel’s Initiative for providing the critical information to the stroke patients. Advent of technologically advanced products are also powering the growth of the market. 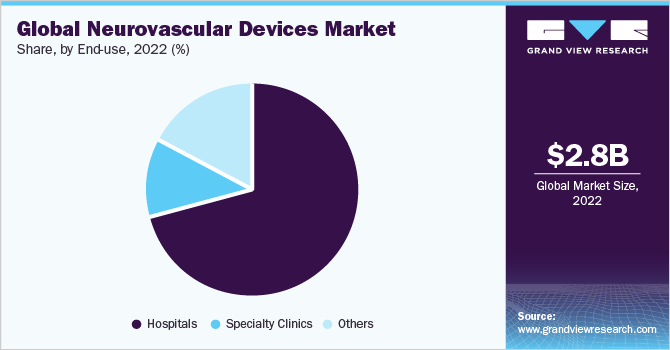 The cerebral aneurysm segment is expected to grow at the highest CAGR of 6.6% during the forecast period, primarily owing to the rising incidence of intracranial aneurysm. According to the Brain Aneurysm Foundation, an approximate 6.5 million people in US have an unruptured brain aneurysm and about 30,000 people suffer a brain aneurysm rupture each year. Further, increasing demand for minimally invasive surgical procedures, introduction of technologically advanced products and In February 2020, Cerus Endovascular Ltd. received European CE Mark approval for its lead product, the Contour Neurovascular System, for the treatment of intracranial aneurysms.

North America dominated the market with the share of 26.65% in 2021 owing to the presence of key manufacturers such as Stryker Corporation, Penumbra, Inc., Johnson & Johnson, and Merit medical systems, Inc. in the region. In April 2020, Cerus Endovascular Ltd. received CE Mark approval for its 0.021-inch Contour Neurovascular System, compatible with smaller commercially available 021 microcatheters for treatment of saccular intracranial aneurysms.

The rising prevalence of neurological disorders, and increasing demand for minimally invasive surgical procedures are driving the market growth in this region. For instance, according to the CDC, in US, yearly more than 795,000 people suffer from stroke, amongst 87% is an ischemic stroke.

Increase in the R&D investment by the manufacturers and rise in the government initiatives are contributing immensely to the regional market growth. For instance, Medtronic Neurovascular Clinical Affairs is sponsoring a clinical trial to assess the safety and effectiveness of the ‘Pipeline Vantage Embolization Device’ with Shield Technology in the treatment of intracranial aneurysms within the intended indication for use. Also, recently in April 2021, the Society of Neurointerventional Surgery (SNIS) and NeuroPoint Alliance (NPA) collaborated with the Society of Vascular and Interventional Neurology (SVIN) to the NeuroVascular Quality Initiative-Quality Outcomes Database (NVQI-QOD).

In February 2020, NeuroVasc Technologies, Inc. entered a strategic partnership with the Wego Group that includes USD 34 million in funding to support the firm’s product portfolio development and global clinical trial program. The strategic alliance marks a major step forward for NeuroVasc Technologies in bringing a full neurovascular platform to market.

Asia Pacific is expected to grow at the highest CAGR of 7.9% during the forecast period due to the factors such as rising target disease burden. According to an article published by M Gourie Devi, it is projected that around 30 million people in India suffer from several forms of neurological diseases and the average prevalence rate is 2,394 patients per 1,00,000 of the population. Furthermore, factors such as rising healthcare expenditure, entry of key players in the region are also contributing towards the market growth.

Key market players are focusing on the launch of innovative types of medical devices, growth strategies, and technological advancements. For instance, in August 2020, Stryker Corporation launched the Surpass Evolve Flow Diverter following approval from the U.S. FDA. It is the first 64-wire cobalt-chromium flow diverter in the United States, and it is intended to aid aneurysms heal. Surpass Evolve is Stryker's newest flow diversion innovation, following the release of Surpass Streamline in late 2018. These advancements in the market are anticipated to boost the market growth over the forecast period. Some of the key players in the global neurovascular devices market include:

This report forecasts revenue growth and provides an analysis on the latest trends in each of the sub-segments from 2018 to 2030. For this study, Grand View Research has segmented the global neurovascular devices market report on the basis of device, therapeutic application, and region:

How big is the neurovascular devices market?

b. The global neurovascular devices market size was estimated at USD 2.68 billion in 2021 and is expected to reach USD 2.83 billion in 2022.

What is the neurovascular devices market growth?

b. The cerebral embolization and aneurysm coiling devices dominated the global neurovascular devices market and accounted for the largest revenue share of 37.69%.

b. The stroke segment dominated the global neurovascular devices market and accounted for the largest revenue share of 57.19%.

Which region accounted for the largest neurovascular devices market share?

b. North America held the largest share of 26.65% in 2021 due to the presence of key manufacturers in the region, an increase in R&D investments, and a rise in the number of government initiatives.