The global next-generation non-volatile memory market size was valued at USD 524.8 million in 2015 and is presumed to gain traction over the forecast period. The industry is expected to gain momentum owing to increasing demand for high scalable, fast, and economical memory solutions. With increasing data, there is an increasing need to manage and store the data and information for future references.

Increasing demand in various applications such as industrial and replacement of flash memory may provide new opportunities for market growth over the forecast period. Increasing demand for flexible and wearable electronics may also provide new avenues for industry growth.

The MRAM product segment dominated the overall industry in 2015 with a market size valued at USD 240.2 million. The ReRAM segment is anticipated to emerge as the fastest-growing product segment over the forecast period. The memory types are generally classified based on their functional properties with respect to the programming and erasing operations. 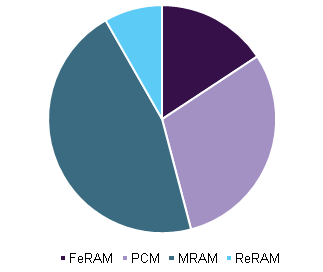 Non-volatile memory is expected to improve the input and output performance of enterprise storage systems as their requirements are estimated to increase with the growing demand for web-based data. The adoption of PCM over NOR or flash memory in mobile phones is expected to increase. Microcontrollers and smart cards are likely to adopt PCM, MRAM, or STT-MRAM as a substitute to embed flash higher-density chips.

The Asia Pacific is expected to be the key regional market over the forecast period owing to the presence of key industry participants in countries such as China, South Korea, Japan, and India. Additionally, the growing computer and mobile phone industry are also expected to favor regional growth over the next six years.

DDR has the ability to fetch data on both the rising and falling edge of a clock cycle which doubles the data rate for a given clock frequency. SATA interface is primarily used in computer systems and laptops. PCIe interface is suitable for all computer applications including enterprise servers, consumer personal computers (PC), communication systems, and industrial applications for caching and buffering applications.

This report forecasts revenue growth at global & regional levels and provides an analysis on the industry trends in each of the sub-segments from 2014 to 2024. For the purpose of this study, Grand View Research has segmented the global next generation non volatile memory market on the basis of product, application, and region: