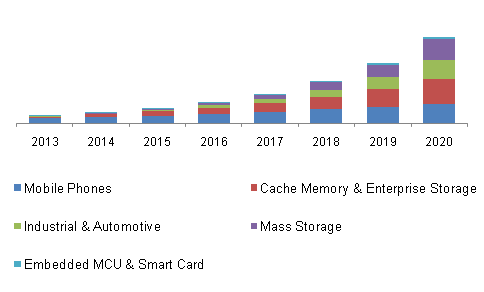 The next generation memory market products address the urgent need in some specific and small-form devices. Enterprise storage is expected to the key application segment over the forecast period owing to increasing adaptation of STT-MRAM and PCM memory. Non-volatile memory is expected to improve the input and output performance of enterprise storage systems as their requirements are estimated to increase with the growing demand for web-based data. The adoption of PCM over NOR or flash memory in mobile phones is expected to increase. Microcontrollers and smart cards are likely to adopt PCM, MRAM or STT-MRAM as a substitute to embed flash higher-density chips.

Non-volatile memory (NVM) is highly reliable and can be programmed using a simple microcomputer and in most modern electronic equipment; the segment accounted for the majority of the next generation memory market in 2013. Few non-volatile memories include Phase-Change memory (PCM), Ferroelectric RAM (FeRAM), Magneto-resistive RAM (MRAM), Resistive RAM (RRAM), flash and spin-transfer torque RAM (STT-RAM). The memory types are classified based on their functional properties with respect to the programming and erasing operations. MRAM, STT-RAM, and RRAM are expected to be promising emerging technologies. Spin-transfer torque technology has the potential to reduce current requirements and cost; however, at present, the amount of current needed is too high for most commercial applications. Additionally, features such as increased security, lower power consumption, and higher endurance are also expected to be the key NVM attributes contributing to market growth.

MRAM, STT-RAM, and RRAM are expected to be promising emerging technologies. Spin-transfer torque technology has the potential to reduce current requirements and cost; however, at present, the amount of current needed is too high for most commercial applications. Additionally, features such as increased security, lower power consumption, and higher endurance are also expected to be the key NVM attributes contributing to market growth.

Asia Pacific is expected to be the key regional market over the forecast period owing to the presence of key industry participants in countries such as China, South Korea, Japan, and India, etc. Additionally, growing computer and mobile phone market is also expected to favor the regional next generation memory market over the next six years. Different interface technologies include DDR, SATA, SAS, PCIe, and I2C, etc. DDR interface are majorly used high speed and memory demanding applications such as industrial, networking, and telecommunication equipment. They are also used in servers, workstations, and graphic cards. DDR has the ability to fetch data on both rising and falling edge of a clock cycle which doubles the data rate for a given clock frequency. SATA interface is primarily used in computer systems and laptops. PCIe interface is suitable for all computer applications including enterprise servers, consumer personal computers (PC), communication systems, and industrial applications for caching and buffering applications.

Key vendors in the next generation memory market are IBM Corp, Adesto Technologies, Everspin Technologies, Crossbar Inc, Fujitsu Ltd, Intel Corporation, Micron Technology, Samsung Electronics Co. Ltd. and Toshiba Corporation, etc. Toshiba and South Korea-based SK Hynix are working on MRAM that offers high storage capacity and consumes two-thirds the power of DRAM, which is widely used in personal computers, smartphones, and other equipment. Replacing these regular memory chips with MRAM is expected to increase the battery life of equipment and drive transfers of large volumes of data such as video files. Additionally, this is also expected to overlay the way for smaller battery components boosting the development of wearable devices such as watch computers and eyeglasses.