The global nitrogenated coffee market size was valued at USD 9.8 million in 2018. Health benefits including less calorie and sugar content associated with these products are expected to remain a key factor driving the market across the globe. Furthermore, less bitter, smoother, and creamier taste of nitrogenated coffee products is expected to attract consumers, especially young and millennial population, across the world.

Over the past few years, consumer preference in the U.S. is shifting towards non-dairy milk-based beverages. Almond, soy, oat, coconut, hemp, macadamia nut, and pea milk have gained significant popularity in this nation. Among these non-dairy milk beverages, oat milk increased by triple digits from 2017 to 2018. Growing lactose-intolerant population is expected to promote the market growth of the non-dairy cold brew in the near future. 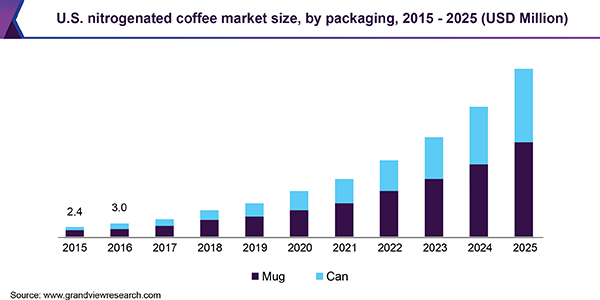 Growing demand for organic beverages has been encouraging the producers to expand the product line in this segment. Manufacturers are using organic ingredients and flavors for the production of this cold brew. For instance, in November 2017, Byron Beverage Co. launched its organic product, Black Nitro in Australia. The product is available in cans, which contains no sugar and a double shot of cold-brew.

Some studies have found that young consumers are accelerating the demand for cold brew products. The sweet taste and thick texture of the product have been attracting the young population across the globe. The infused nitrogen gives the thicker texture as it does not dissolve easily in water. It also reveals the natural sweetness of the product and reduces the sugar requirement. The product comes under top trending Google searches in countries including Spain and Mexico. This represents the popularity of the product among consumers. In addition, demand for the product has witnessed a remarkable growth in summer as it fits well as a summer drink.

The mug segment dominated the industry with more than 60.0% share of the overall revenue in 2018. A large number of consumers enjoy drinking their cold brew at the restaurants or café, who serve the product in mugs. Therefore, the majority of the revenue came from the product consumed in mugs. The product releases through a special tap fitted with the serving table, which gives it a bar-like look. This serving process has been a point of attraction for the nitrogenated coffee market in several locations such as Portland.

The can packaging segment is projected to expand at the fastest CAGR of 29.0% from 2019 to 2025. Increasing demand for convenience and ready-to-drink beverages is expected to fuel the demand for canned product across the world. In March 2018, Nestlé launched Nescafé Azera Nitro, a new nitrogen infused coffee product line in U.K. and Ireland. These cans are available in two different flavors including Nescafé Azera Nitro Latte and Nescafé Azera Nitro Americano.

As of 2018, vanilla held the largest share of more than 40.0%. Vanilla flavored coffee has high demand in the U.S. It is one of the most popular flavors in the world. This smooth and sweet flavor compliments the bitter taste of coffee and blends into it easily. In 2016, Starbucks Corporation launched vanilla flavored Nitro Cold Brew with Sweet Cream for the consumers to enjoy the sweet flavor. Following the trend, McDonald's introduced Nitro Coffee Thickshake, which contains Macca's classic vanilla thick shake. A large number of local or national level cafés offer this flavor in the U.S. 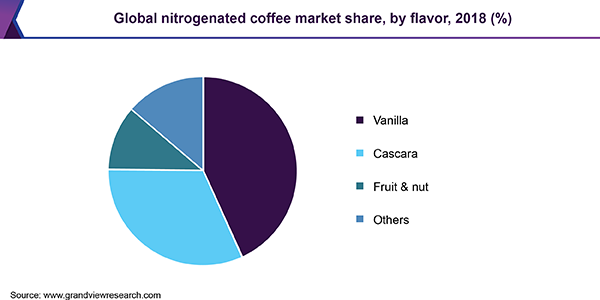 The fruit and nut flavored drink is expected to expand at a CAGR of more than 25.0% from 2019 to 2025. The nutty flavors blend well with cold brew and offer a rich taste. Key players of the industry are introducing new products in fruits and nuts flavors. Hazelnut, pecan, maple, and coconut are the most popular flavors that are expected to witness steady growth in the near future. This nitrogen infused product goes well with more flavors as compared to the other forms of coffees. Therefore, there is a wide scope for innovation in terms of flavor. The new and innovative flavors are anticipated to drive the demand for the product over the world.

As of 2018, North America held more than 80.0% share of the total revenue. According to the National Coffee Association, as of 2018, around 64% of Americans drink coffee. The average coffee consumption of the U.S. is around 3 cups per day. Over the past few years, this region has witnessed higher growth in the cold brew as compared to iced coffee. As of 2018, the cold brew grew 42% higher than the iced drink. The major companies have been introducing and expanding their business in this region due to the presence of a large number of coffee consumers.

Asia Pacific is expected to expand at a CAGR of 30.7% from 2019 to 2025. Consumption of cold brew has been increasing in the Asian countries including China, Japan, South Korea, Indonesia, Philippines, Malaysia, and Thailand. Over the past few years, international coffee chains including Starbucks Corporation have been rapidly expanding their outlets in these nations. For instance, number of stores count of Starbucks Corporation has increased from 1,017 in 2013 to 3,300 in 2018 in China.

Over the past few years, growing demand for the flavored product has been encouraging the producers to emphasize on the product innovation. For instance, in July 2017, Starbucks Reserve, which offers rare and extraordinary products, launched Starbucks Nitro Dirty Chai, a combination of coffee and chai. This innovative cold brew is expected to gain significant popularity as a summer beverage.

This report forecasts revenue growth at the global, regional, and country levels, and provides an analysis on the latest industry trends in each of the sub-segments from 2015 to 2025. For the purpose of this study, Grand View Research has segmented the global nitrogenated coffee market report based on flavor, packaging, and region: