The global non-alcoholic steatohepatitis biomarkers market size was estimated at USD 800.6 million in 2021 and is expected to expand at a compound annual growth rate (CAGR) of 23.6% from 2022 to 2030. Non-alcoholic Steatohepatitis (NASH) biomarkers market is witnessing growth due to the factors such as the rising prevalence of chronic liver diseases which is projected to increase demand for non-invasive diagnostic tools for NASH detection. Moreover, the market growth is propelled owing to the launch of novel diagnostic tests. 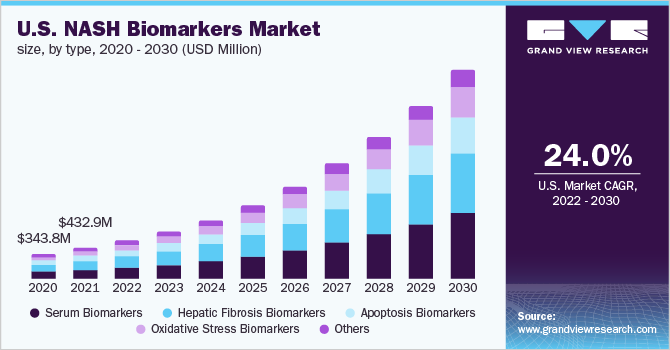 Increasing demand for non-invasive diagnostic tools for NASH detection is anticipated to drive the market. A liver biopsy has traditionally been used to detect Non-alcoholic fatty liver disease, and its degenerative condition, NASH. This technique is both costly and invasive. Because of this disadvantage, cost-effective and noninvasive diagnostic techniques such as biomarker tests have been developed. Many major corporations spent a significant amount of money on R&D to introduce biomarker tests. Such factors will drive the NASH biomarkers market in the forecast period.

The launch of novel diagnostic tests is one of the major factors contributing to the market growth. For instance, in May 2021, GENFIT announced the launch of its non-invasive NASH diagnosis test “NASHnext” in collaboration with Labcorp exclusively across Canada and the U.S. The commercialization of this test is expected to propel the diagnosis of the disease.

Nonalcoholic steatohepatitis (NASH) has been one of the most difficult diseases for the diagnostic industry to crack owing to non-specific or silent symptoms of NASH, thereby, patients are unaware until the late stages of the disease. This hinders the diagnosis of the disease limiting the overall growth of the market for these patients.

Studies are being conducted to develop novel functional tests. These tests are used to measure changes in liver function before the condition reaches fibrosis stages. In addition, breath tests are also being considered for the detection of molecules and compounds associated with NASH. These tests are projected to provide robust information and give significant competition to biomarker tests.

The serum biomarkers segment held the largest market share of 32.6% in 2021. The dominance of the segment is attributed to the effectiveness and the wide adoption of serum biomarkers as a NASH diagnosing tool. Furthermore, its use to differentiate between basic steatosis and NASH gives it a competitive edge. Projected launch of novel serum biomarkers such as apolipoprotein B, apolipoprotein A1, leptin, adiponectin, ghrelin, free fatty acids, and tumor necrosis factor-alpha is expected to escalate the market growth. Moreover, key market players are focusing on gaining approvals for marketing serum biomarkers-based tests to meet the demand for diagnosis tools. For instance, in 2021, Siemens Healthineers obtained marketing authorization from FDA for its Enhanced Liver Fibrosis test.

The apoptosis biomarkers segment is expected to show lucrative growth during the forecast period. The evaluation and treatment of liver disease still rely heavily on liver biopsy. It has been demonstrated in multiple studies that apoptotic markers help distinguish between NASH and basic steatosis which enhances the adoption of apoptosis biomarkers among the population. Cytokeratin-18 is one of the most promising indicators connected to the level of hepatocyte apoptosis (CK-18) with an 82% overall specificity. The increasing use of apoptosis biomarkers in combination with other biomarkers enhances the overall diagnostic accuracy.

The pharma and CRO industry end-use segment held the largest market share and is expected to witness the fastest growth rate over the forecast period. The growth of the market is attributed to the rising prevalence of liver disorders further increasing demand for non-invasive diagnostic tools to detect chronic liver disease. In addition, with rising diagnostics, the treatment market is on the rise which further increases the demand for pharmaceutical drugs eventually fueling the growth of the overall segment. 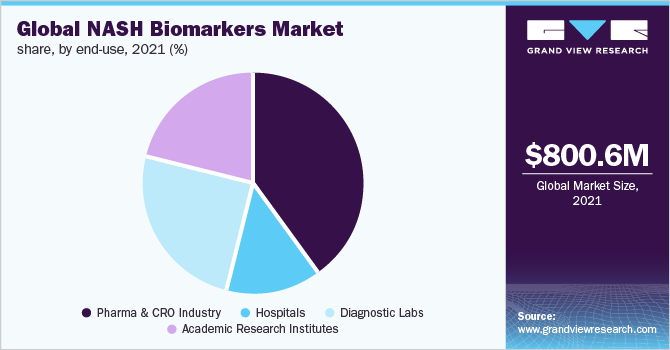 The invasive nature of biopsies for detection of NASH has been a critical challenge for the clinical trials being conducted for the development of NASH treatment. The high accuracy of biopsy gives it a competitive advantage and makes it difficult for the newly launched non-invasive tests to overcome biopsy. In April 2022, CN Bio announced the launch of new reagent “PhysioMimix” which uses liver-on-a-chip technology in order to enhance drug discovery efficiency by allowing the researchers to gain insights into disease mechanisms.

North America accounted for the largest market share of 59.4% in 2021 which can be attributed to various factors such as increasing diagnosis rate and the early launch of novel products in this region. Research and development funding for biomarkers is abundant, which supports medication development efforts and fosters business expansion. The increasing movement of players and rising availability of tests in the U.S. market are crucial factors driving the market. For instance, in January 2022, ELF Test which is a prognostic blood test for studying disease progression in NASH patients received a De Novo marketing authorization from the FDA. The test is available in collaboration with Quest Diagnosis and Labcorp. This gives the physicians immediate broad access to the test, allowing them to pinpoint the likelihood severe form of the disease. 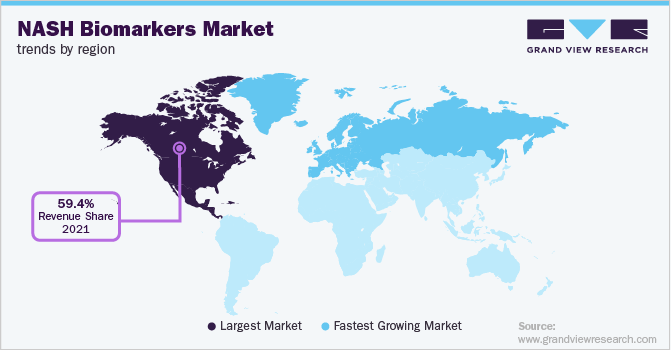 In Europe, the market is expected to witness a lucrative growth rate over the forecast period. The growth of the market is due to the rising disease burden and economic impact of NASH in the region. As per The European Journal of Health Economics in 2021, the diagnosis of NASH in the U.K. is usually incidental as a result of a general visit to the GP. However, 79.8% of the population remains undiagnosed representing a huge opportunity and unmet need owing to the lack of awareness regarding the symptoms of the condition.

Key players operating in the market are focusing on partnerships, strategic collaborations, and geographical expansion, in emerging and economically favorable regions. For Instance, in 2021, Second Genome and Virginia Commonwealth University collaborated on research to develop a non-invasive composite biomarker based on stool samples for non-alcoholic steatohepatitis. Some of the key players in the global NASH biomarkers market include:

This report forecasts revenue growth at global, regional, and country levels and provides an analysis of the latest industry trends in each of the sub-segments from 2018 to 2030. For the purpose of this report, Grand View Research has segmented the NASH biomarkers market on the basis of type, end-use, and region: 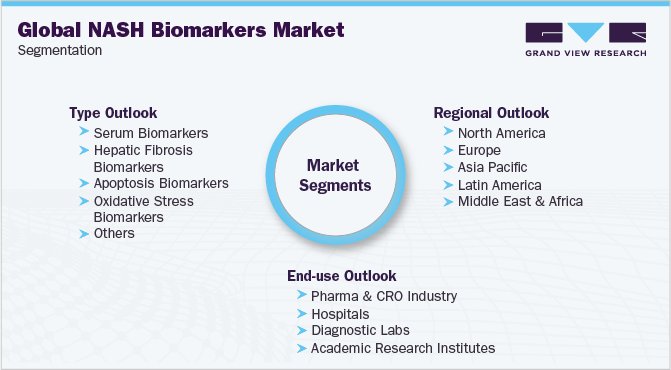 How big is the non-alcoholic steatohepatitis biomarkers market?

b. The global non-alcoholic steatohepatitis biomarkers market size was estimated at USD 800.6 million in 2021 and is expected to reach USD 982.1 million in 2022.

What is the non-alcoholic steatohepatitis biomarkers market growth?

b. Serum biomarkers dominated the non-alcoholic steatohepatitis biomarkers market with a share of 32.% in 2021. This is attributable to benefits such as the ability to distinguish simple steatosis from NASH and efficient outcomes. These benefits reduce the need for liver biopsy, which is an added advantage compared to other segments.

Who are the key players in the non-alcoholic steatohepatitis biomarkers market?

What are the factors driving the non-alcoholic steatohepatitis biomarkers market?