The global nonmydriatic handheld fundus camera market size was valued at USD 93.2 million in 2017 and is anticipated to expand at a CAGR of 9.1% over the forecast period. Globally rising geriatric population, coupled with increasing chronic disorders such as diabetes and hypertension, has resulted in increased incidence of eye disorders. Key retinal disorders include diabetic retinopathy, age-related macular degeneration, and retinopathy of prematurity. This has driven demand for nonmydriatic handheld fundus cameras for detection and screening of various disorders. 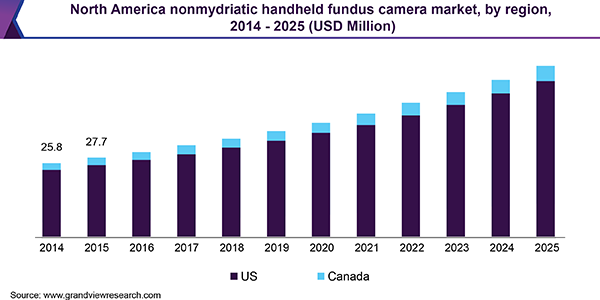 WHO also states that 76 million people are expected to suffer from vision loss by 2020; of these, 15% will likely suffer from diabetic retinopathy, 10% from acute macular degeneration, and 5% to 6% are estimated to suffer from other eye disorders.Diabetes increases the risk of developing vision threatening eye diseases, with retinopathy being one of the most prominent conditions. Around 30% of diabetics have some degree of retinopathy. In addition, 10% of them are prone to developing a life-threatening form of the disease.According to a 2016 report by the World Health Organization (WHO), globally, there were about 422 million diabetic patients in 2014 (8.5% of the total population) as compared to 108 million in 1980. Furthermore, the prevalence of diabetes is expected to increase by 42% in developed countries and about 150-200% in developing countries.

Various government initiatives are anticipated to boost the global market during the forecast period. For instance, according to laws and regulations by various medical devices agencies in U.S. as well as Japan, fundus imaging cameras must be replaced once in every four years. This helps maintain the quality of instruments, thereby improving diagnosis and treatment. Hence, demand for these devices is likely to increase in these developed countries in the coming years.

The nonmydriatic handheld fundus camera market has been segmented into North America, Europe, Asia Pacific, Latin America, and Middle East and Africa (MEA). North America accounted for the largest market share in 2017. Increasing number of product approvals and launch of new products in U.S. and Canada has been significantly contributing to the growth of this regional market. For instance, Topcon Medical Systems received clearance for 3D OCT-1 Maestro from the U.S. FDA in July 2016.

Increasing prevalence of vision related disorders, growing awareness about their treatments, and technological advancements in the field have also been driving the market. According to the National Eye Institute, the number of people suffering from diabetic retinopathy, aged 40 and above, in U.S. is estimated to reach 11.4 million by 2030. Government initiatives being undertaken for quality, affordable, and speedy healthcare delivery are likely to drive the market. Medicare, for instance, covers the cost of cataract surgery, ocular prosthesis, and glaucoma screening. Some of the key market players in North America are Carl Zeiss Meditec; US Ophthalmic; ELI EZER USA; GlobalMed; and Volk Optical, Inc. 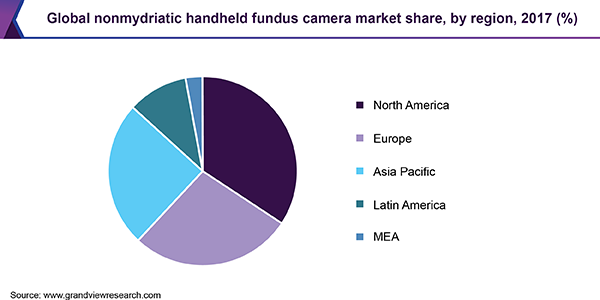 Asia Pacific is anticipated to be one of the fastest growing regional markets over the forecast period due to presence of a large patient pool, improved healthcare services, and increasing medical tourism in the region. Players in this region are focused on introducing new, advanced, and improved devices in the market. CrystalVue Medical, a Taiwan-based company, designed, manufactured, and commercialized digital nonmydriatic fundus cameras for diagnosis of diabetic retinopathy, glaucoma, and other retinal diseases. Some of the key manufacturers of nonmydriatic fundus camera in Asia Pacific are Remidio Innovative Solutions Pvt. Ltd.; Chongqing Kanghuaruiming S & T Co., Ltd.; Focus Technology Co., Ltd.; and Forus Health Pvt. Ltd.

Some of the key companies operating in the market are Topcon Medical Systems, Inc.; Carl Zeiss Meditec, Inc.; Canon, Inc.; NIDEK Co., Ltd.; CenterVue SpA; Optovue, Inc.; and Optomed Oy (Ltd.). Some of the product manufacturers are partnering with other firms to strengthen their market presence and geographical reach. For instance, Optomed Oy (Ltd.) entered into a distribution agreement with Essilor GmbH in June 2016. This partnership is expected to be beneficial for both companies in the coming years.

This report forecasts revenue growth at global, regional, and country levels, and provides an analysis on latest industry trends in each of the sub-segments from 2014 to 2025. For the purpose of this study, Grand View Research has segmented the global nonmydriatic handheld fundus camera market report on the basis of region:

How big is the nonmydriatic handheld fundus camera market?

b. The global nonmydriatic handheld fundus camera market size was estimated at USD 109.9 million in 2019 and is expected to reach USD 119.6 million in 2020.

What is the nonmydriatic handheld fundus camera market growth?

b. North America dominated the nonmydriatic handheld fundus camera market with a share of 33.8% in 2019. This is attributable to increasing geriatric population and technological advancements in the field.

Who are the key players in nonmydriatic handheld fundus camera market?

What are the factors driving the nonmydriatic handheld fundus camera market?

b. Key factors that are driving the market growth include increasing eye disorders and supportive government regulations.